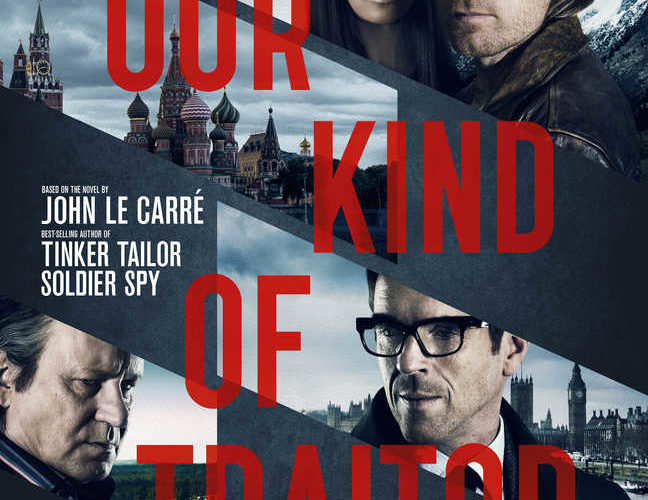 [Review] Our Kind of Traitor

Gorgeous and deliberate, Susanna White‘s Our Kind of Traitor, adapted from the John le Carré novel, exists in that ever-so murky, gray area of international politics, and ultimately crumbles under the weight of those complexities.

We’ve got a hero couple, Perry (Ewan McGregor) and Gail (Naomie Harris), trying to save their marriage with a vacation in Marrakech when they meet Dima (Stellan Skarsgard), a hammy Russian oligarch who happens to handle a whole lot of mafia money. When Dima asks Perry to pass along classified intel to the British Secret Service to bargain for his and his family’s escape, wheels of intrigue are set in motion.

Though the stakes are raised early and we’re reminded of the consequences often, there’s not much to grasp on to. Perry’s strange motivation in wanting to help a man he’s never met is interesting, but quickly abandoned. A dweeby professor who cheated on his wife with a student, McGregor plays Perry as a man wandering about, waiting for a reason to be redeemed. Harris puts in a solid turn as Perry’s jilted-but-determined wife, though she is similarly kept on the sidelines of the over-reaching narrative. Skarsgard, always reliable, brings some levity to go along with the tragedy of his character’s situation.

It’s no surprise that the author of numerous spy classics has had a renaissance of sorts these days. His particular brand of page-turning cynicism fits in nicely with the world right now. Everybody is watching everybody and there’s no one to be trusted. This thematic burden falls on British agent Hector (Damian Lewis), who receives Dima’s intel. He’s an honest man with a distaste for the corruption of his higher-ups, specifically a blink-and-you’ll-miss-him villain played by Jeremy Northam.

When Hector is on screen the film feels more urgent, more tense. But then he’s not on screen nearly enough. To a large degree, this is the film’s central problem. Despite a compelling, timely conflict, it’s all spread a bit thin. As the window for Dima and his family to defect begins to close, certain revelations allow for convenient shifts that feel less surprising and more manipulative.

In 108 minutes, White and screenwriter Hossein Amini (Drive, Two Faces of January) are clearly determined to tell a personal story on a larger, international canvas. Unfortunately, most of the characters here feel disjointed from one another. The only bond built is the one between Perry and Dima, two characters who are little more than pawns in the game. It’s exciting enough watching them try to negotiate their situation, but it’d be more intriguing if we knew more about the people making the decisions.

Our Kind Of Traitor opens on Friday, July 1.