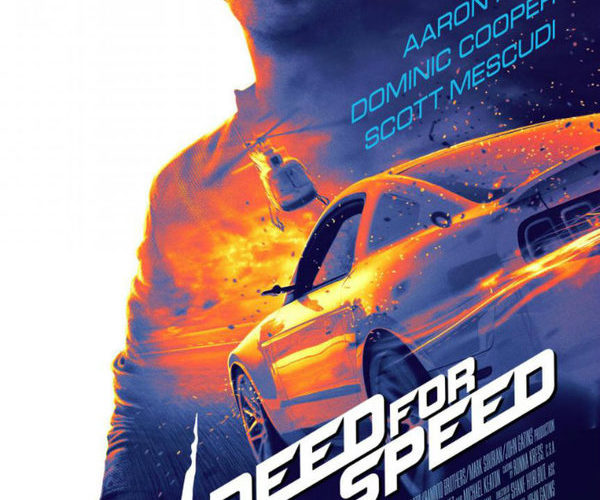 I suspect you’re going to hear quite a bit about the irresponsible and reckless depictions of street racing in Scott Waugh’s Need for Speed once the movie opens. Criticisms directly related to the glorification of a dangerous and illegal form of car racing weren’t prominent for the likes of Fast and the Furious and its sequels, but in the wake of Furious star Paul Walker’s death, it isn’t surprising that the cultural climate has changed. Despite this, there’s a very different reason Need for Speed will end up holding the punching bag; it’s such an empty, brainless action exercise that there’s nothing to distract from the fact the movie seems to exist expressly for the purpose of amping up teens for their careless drive back from the theater.

Aaron Paul, fresh off the breakthrough role of Jesse Pinkman in Breaking Bad, has picked the wrong gas-guzzling beater as his segue to the big screen. Paul plays mechanic Tobey Marshall, who’s running an auto-shop during the day and shutting down the town by night so he can engage in illegal street-racing overseen by a buddy flying a Cessna. In what amounts to a plot, Marshall builds a tricked-out Mustang for rival racer Dino Brewster (Dominic Cooper) and when a close friend is killed in a race with Dino, it’s Tobey who ends up going to jail for two years. When he gets out, Tobey is obviously primed for vengeance—never mind that Dino didn’t kill Pete directly like some gun-toting gangster—and sets out to compete in an infamous underground race where he can go head to head with his nemesis. As story and character definition goes, there’s very little of it here. Paul is channeling Jesse when he can, and the rest of the time he’s totally lost. Cooper is mugging ferociously but his Dino is such a conceptually thin villain that he’s easy to forget about when not onscreen. Imogen Poots is criminally wasted as a token female squeeze for Tobey and the less said about Michael Keaton’s “take-the-money-and-run” turn as Monarch (engineer of the secret race), the better. The real stars are the cars, and they sure are gorgeous and well-featured but even the most easily pleased gearhead will understand there are better venues for showcasing automotive beauty than this listless video-game adaptation.

Waugh is aiming at some kind of poignancy that eluded Fast and the Furious, but he misses a very important part of what made the best entries in that series work; a sense of camp and high-energy that treated the material like it was fantasy. In Need for Speed, the action scenes have been constructed carefully to reflect technically flawless, realistic vehicular mayhem and at a purely sensory level they work. They do not however illicit any tension, drama or excitement in the context of the film, and in the vacuum of that experience we have only reckless endangerment to think about.

Why, exactly, must the movie be this vacant? Careful viewers will see that with a few more script rewrites Need for Speed could have almost been a character drama that only used the driving as a backdrop. Instead, the stilted screenplay offers up reheated junk that passes as dialogue and everyone, even Keaton, falls prey to at least one cringe-worthy line. The action has been assembled along the lines of a video game, but like Waugh’s earlier directorial collaboration, 2o12’s Act of Valor, it only replicates the surrogate feel of the source without any of the engagement that comes with holding a controller and being placed in the moment. Eventually one returns to the issue of whether a film like Need for Speed is culpable in helping engender a head-space that encourages the onscreen behavior without emphasis on consequence. From this critic’s perspective, it’s not that Waugh and his team have chosen to present this story as something exciting, but that they completely avoid the implications of their character’s actions.

In Need for Speed, the racing of cars is never anything less than awesome, regardless of what gets destroyed or who gets hurt in the process. This is, simply, bad storytelling and bad filmmaking and I’m optimistic enough to guess that the target audience who might be taken in by this will reject it on grounds of being flat, tedious garbage. Maybe the tendency to blame the movie for any joyriding that takes place after is wrongheaded, but the critics will have a point; once you’ve sat through something as dry and turgid as this film, it’s understandable you’d be itching for real thrills.