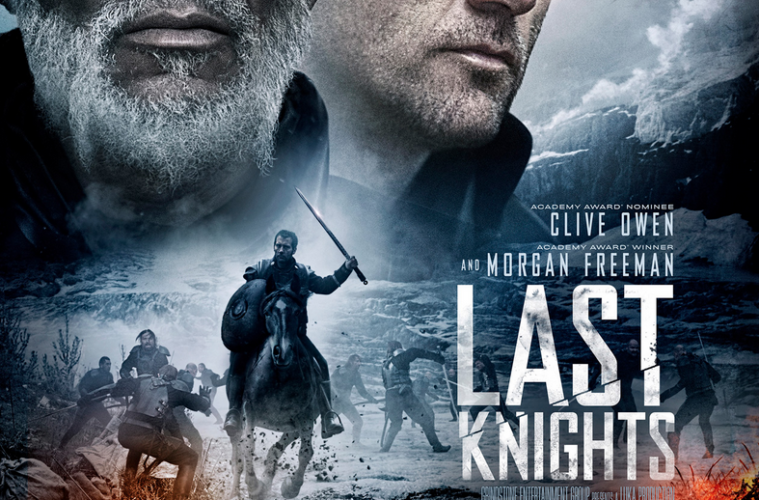 Clive Owen has the right figure and face for a world-weary medieval knight, but twice now he’s ended up in period action thrillers more grueling than the Middle Ages themselves. It’s been over ten years since Owen played the titular hero in Antoine Fuqua’s stubbornly flat spectacle King Arthur, and now he returns to deadly-but-principled warrior mode as Raiden, the sullen bruiser at the heart of Kazuaki Kiriya’s Last Knights. Although it’s surely been intended to cash-in on the current boom in bloody swashbuckling adventure, Knights is entirely the wrong kind of throwback. The plot hearkens back to sagas of Old Hollywood, and the production values seemingly suggest something opulent and absurd in the vein of the late 80’s, but the completed project has lost its way and most specifically reminds one of those bland, abandoned fantasy films that seemed to just materialize from nowhere on video-store shelves in the late 90’s.

Having Morgan Freeman show up almost immediately as the old mentor, Bartok, doesn’t help break the familiarity, and given the overall drabness of the sets, scenery and editing, we expect his departure early. In that regard, you won’t be disappointed, as Bartok—the quintessential noble knight who can finally no longer stomach the corrupt regime he’s employed by—is dispatched in short order by the emperor’s preening, conniving advisor Gezza Mott (Aksel Hennie). The reluctant tool of this assassination is Owen’s Raiden, pupil and comrade of Bartok, who is strong-armed by the emperor (a mystifyingly wasted Peyman Moaddi) to kill his father figure, lest the older man’s family be murdered and homeland destroyed. This betrayal is designed to set the plot into motion, leisurely tipping over sad-sack Raiden, leaving his enemies to fear his eventual revolt and the audience to painfully count the moments until his inevitable restoration as bad-ass righter-of-wrongs. In Last Knights, it takes an unreasonably long time for that other shoe to drop. After being inundated with plentiful choices for this type of story, it’s actually mind-boggling to see how committed Knights is to delivering old, withered clichés in the most deliberate, calculated way possible. So much time is spent underlining the emperor and his advisor’s corruption, but is this not a development we expect and take for granted? These are hardly the arcane and erratic political machinations of Game of Thrones, and the evil characters themselves are so stranded in one-note caricatures that close proximity to them is merely wearying. Why too, squander precious momentum in watching Raiden wallow in his own debauched persona? He’s a hard-living mess with a good heart, but he’s wasting away in podunk anonymity, emotionally abusing an attentive but worried wife (Ayelet Zurer) and disgracing his own once-heroic legacy.

If the film wanted to explore the psychological bedrock behind the alleged principles of this man of war, then these excursions might be warranted. Instead, the dramatic highlight of these sequences is watching Raiden sell off his sword, a scene smothered in symbolism. Of course it won’t be too long before this waylaid warrior is once more plunging that sword into the vile and guilty, and the film’s long-delayed final third delivers a measure of action, although that turns out to be as interminable in its way as the wait that preceded it. Director Kazuaki Kiriya previously directed the stodgy but stylish superhero fantasies Casshern and Goemon, both films that splintered and broke on a narrative level but still managed a certain unrestrained visual hysteria that made them momentarily interesting. The biggest disappointment about Last Knights is that it can’t even joyfully revel in what should be its highlight; a vaguely historical medieval world teeming with castles, courts and fortresses, characters either reveling in exotic luxury or drowning in feudal filth, and finally confronting each other in dizzying, bloody combat. The imagery here is shrouded in darkness and shadow, made murkier by fight choreography that feels rushed and unfocused, and editing that doesn’t seem to understand the overall construction of the story itself.

When a film’s production elements becomes as overwhelmingly oppressive as Knights do—there are only so many cold, snowy forests and ink-drenched nocturnal skirmishes we can take before enough is enough—it often swallows the performers whole, spitting out their effort like indigestiable bones. That’s the case here for all the fine actors, and especially for Owen, who rebuffs the material by embracing it, and ultimately proving that no one else involved cared about it quite as much. Owen, who has done some very good work as of late on films like Words and Pictures and on Cinemax’s The Knick, invests Raiden with a palpable sense of dour unease that almost works despite the muddle that surrounds it; even at his most virtuous, spending time with the knight is like standing next to a cave some wild animal recently emerged from. The bear might not be here right now, but he’s coming back soon. Once Raiden does recruit his rebel army, including a completely devalued Cliff Curtis, the resulting conscript rabble does little more than growl and grunt together. Freeman, for his part, should probably avoid any more mentor roles because they look like easy paychecks, and this one falls so completely into that particular vision of him that it might have eased towards Vetruvius-level parody had he but been in the film longer.

Movies like Last Knights seem to be dropping from the movie heavens all the time these days—one can barely recall The Last Legion, Vikingdom, Iron Clad, or either of the Hercules now—and they are growing increasingly silly and tiresome. I’m not necessarily expecting unbridled mirth and genial humor in films like these—although in the golden age of matinee swashbuckling that’s exactly what we got—but there’s such a sense of unyielding commitment to the dire, gloomy grit of the sub-genre that one suspects the movie was made by actual medieval crusader knights and not passionate filmmakers and actors who actually enjoy doing this for a living. If you’re a studio exec, a screenwriter, director or actor who thinks it might be time to try your hand at the sword and sandal, do yourself a favor and skip an umpteenth viewing of Gladiator or Braveheart, and engage (or reaquaint) with the likes of Errol Flynn’s The Adventures of Robin Hood or Henry Hathaway’s Prince Valiant. In fact, the same goes for anyone who’s had a recent viewing of Last Knights, Seventh Son, or one of their ilk. It’s time for a good cleansing of the palette.

Last Knights is now in limited release and available on VOD.