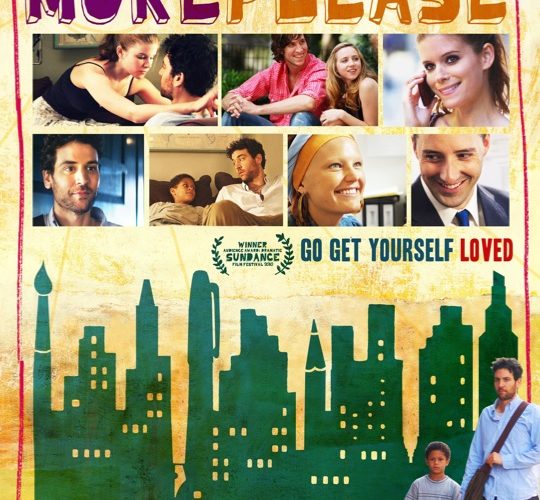 An unabashed love letter to New York City, this ensemble comedy centers on Sam (Radnor), a would-be novelist in his late twenties who is stuck in a rut of one-night-stands and self-defeating exploits when he meets Rasheen, an orphan who got separated from his foster family on the subway. Flustered, Sam takes him under his wing, and the two become unlikely friends while his peers, Annie (Malin Akerman) and Mary Catherine (Zoe Kazan), chastise him to contact the authorities. As Sam and Rasheen’s friendship develops, the film splits focus to include Sam’s friends’ tales as well. Annie, who suffers from Alopecia, which makes her naturally hairless, is looking for love in all the wrong places when she meets an awkward (but adorable) suitor played by Tony Hale. In the meantime, Mary Catherine is quarreling with her boyfriend about their future, which includes a hilariously familiar debate of New York versus Los Angeles. Admittedly, first-time screenwriter Radnor struggles with balancing this interweaving plot lines, but structural setbacks aside, Happythankyoumoreplease is a joyful and deeply charming tale of self-discovery, gratitude, friendship and love. The script is full of witty dialogue that favors sincerity over pretension, but Radnor’s greatest skill may well be his eye for the untapped talents of his actors. For once, Akerman is enlisted to play more than the smiling girlfriend or sultry eye-candy. She shines as the heartbreakingly complicated and yet magnetic Annie. Kate Mara and Zoe Kazan both provide solid supporting performances, but the real scene-stealer here is Tony Hale. Best-known for his zany antics as the hook-handed Buster Bluth of Arrested Development, here Hale is given a chance to do a little drama and go from goofy comic relief to alluring leading man. As improbable as it might seem, he does so exquisitely resulting in a third act scene that is breathtakingly touching. As for Radnor, he is a capable leading man, proving both earnest and endearing while offering something a little darker than he’s shown on How I Met Your Mother.

Now, I know a lot of people are writing off this film because of its unflinchingly positive (and thereby tragically unhip) point of view. At a time where filmmakers are praised for creating meta commentaries with deeply cynical narratives, I was personally thrilled to see someone so willingly embrace a straight forward and unjaded tone. Happy is subversive in that it chooses sincerity over snark in an unexpectedly upbeat rebellion. Happythankyoumoreplease is an unapologetically warm-hearted and thoughtful tale of three people growing up to become the people they want to be. It has a dazzling cast, a whimsical soundtrack, and a handful of happy endings. What’s not to like? It’s a delight that has me hoping to see more from writer/director Radnor.