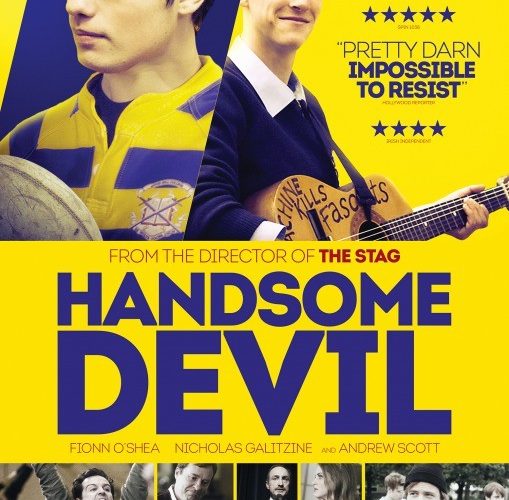 Just be yourself: sentiments easier said than done. The phrase is perfect fodder for coming-of-age films whether the meaning is to educate acceptance in one’s self on the skin’s surface or below. But being perfectly suited towards becoming a resonant vehicle for life lessons doesn’t mean the process of accomplishing that goal with mass audience appeal will be a walk in the park. Sometimes the inherent convention of such thematic underpinnings is too great to overcome. Sometimes the dramatic weight of heavier circumstances projected upon them—those able to necessitate your desire to cease being that which everyone wants—is too tragic for the public at-large to fully embrace. Writer/director John Butler‘s Handsome Devil possesses subject matter for both these pitfalls to consume and yet it survives nonetheless.

A lot of this is due to an endearing cast of characters able to charm their way out of the stereotypical boxes dictating their purpose to the story, but just as much is a product of how that story has been constructed. The latter comes about because Butler crafts his narrative as a comedy surrounding an outsider who has already accepted himself. Ned (Fionn O’Shea) has an entitled superiority complex insofar as knowing the future is brighter than today portends. He’s a good student who excels academically at the Irish boarding school where his father placed him after his mother’s death and quick arrival of new stepmom. But he’ll never fit in because grades don’t matter with his classmates. Rugby is their God and Ned couldn’t care less. So the kids call him “gay.” They make lewd noises synonymous with the word while teachers ignore it because they too would rather teach potential rugby champions than the next Nobel Prize laureate. Ned has accepted this fate. Is he gay? The film never really tells us because it is wholly inconsequential. The character himself describes the word as “strange” or “outsider” rather than “homosexual,” its use targeting the bullies as homophobes more than him as a sexually active teenager. The word exposes the dynamic Ned has faced long enough to wonder whether or not it’s worth getting expelled to move forward alone. It shows how what everyone else says no longer affects him. He simply bides his time with vintage rock albums while his generation catches up.

Ned is therefore the control to compare against two adolescent classifications: those who conform because they’re followers and those who conform because it’s a means towards their survival. I’m not just talking about the students either since their teachers mirror the same insecurities and overcompensations as them. Whether Headmaster Curly (Michael McElhatton) yearning for rugby success while also fulfilling his duties to provide a safe and stimulating environment for that success to flourish, Coach Pascal (Moe Dunford) letting everything else in his life implode so long as his dream of winning a championship comes true, or English instructor Mr. Sherry (Andrew Scott) being unable to practice the integral lessons he so emotionally teaches, these adults aren’t as far-removed from the fear of inclusion and relevance felt as children. Ned might be our narrator, but he isn’t the catalyst with the range to shake up the status quo and see these masked identities reveal themselves. No, that role falls to transfer student Conor (Nicholas Galitzine). He’s a star rugby player that Pascal and the team are glad to have, but he’s also someone who doesn’t quite fit in with the image others assume. It’s through his intuitively chosen roommate Ned (Curly is the type of authority figure you hate to love because he’s good at his job if only he didn’t let one facet ultimately trump all others) and the fiercely compassionate Mr. Sherry (himself a newcomer after the old English teacher died) that Conor witnesses what it’s like to not always exist in blacks or whites.

He sees kindred spirits in both—respectively a peer with whom rugby isn’t the topic of conversation and a role model willingly to stop the culture of bullying running rampant. They allow him to expose the side of himself that attributed to his expulsion from his former school, a lighter side of artistic endeavor and empathy that augments his performance on the field rather than stifles it. Even so, however, this embrace fractures his life in two as the bigoted coach with a one-track mind eventually uses his sway with his athletes (and subsequently the entire school) to force Conor to choose. His mask is cracking and he cannot just shrug off the abuse Ned takes—with good reason. So does he rip it off or reinforce it? While the central force driving a wedge between majority (red-blooded sports lovers filled to the brim with archaic definitions of masculinity) and minority (men with sensitivity seeking community through inclusion rather than superiority via exclusion) is sexual orientation, Handsome Devil isn’t about gay romance. In the twenty-first century, films using homosexuality don’t have to be strictly about homosexuality. Films like this can normalize it as an example of “other” speaking to young adults figuring out their place in society because of their sexuality or something else entirely. Butler is preaching a message about staying true to one’s self in order to become part of something bigger. It’s about allowing a group into your personal sphere. Ned can embrace rugby and rugby can embrace those “tradition” has otherwise ignored.

Sports are a perfect example of preconceptions dictating demeanor, of lying for survival. You don’t have to look further than the lack of openly gay athletes in professional sports. Statistics presume they exist, but that world has yet to allow them to be accepted as gay and athletic—gay and “manly”—simultaneously. Butler’s film may be beholden to certain clichéd conventions and formulaic familiarity in its progression, but its characters evolve within them with an authenticity that dismisses such convenience as a way of life. It’s a story full of people young and old who have grasped ahold of one identifying feature or goal at the detriment of others. Despite a rosier outlook than reality might ultimately provide, the story does show how self-compartmentalization isn’t the only way.