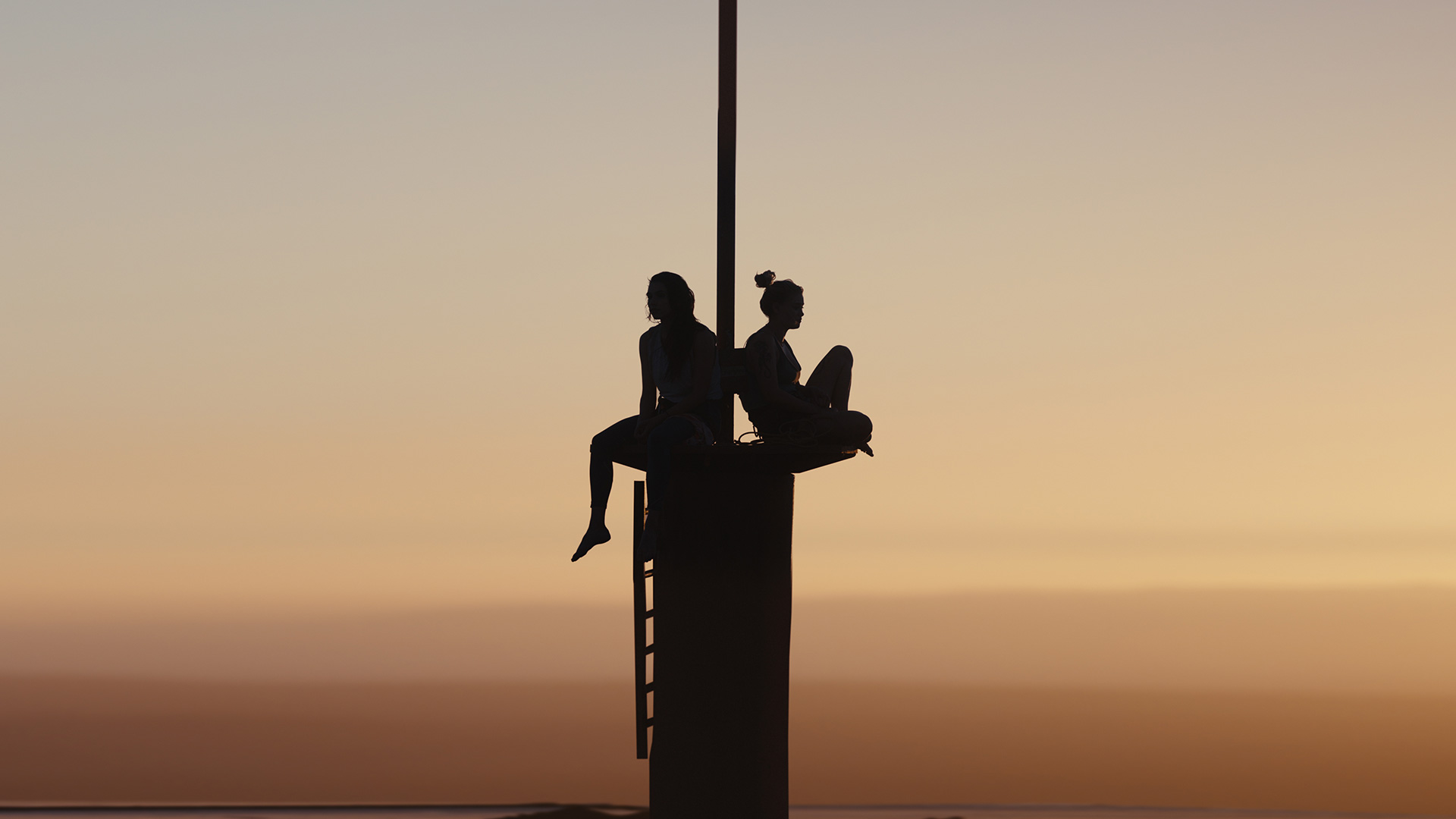 It’s been a year since Dan Connor (Mason Gooding) fell to his death while rock climbing with his wife Becky (Grace Caroline Currey) and her best friend Hunter (Virginia Gardner). The latter was free-climbing and mocking the other two for being slow as they detached and reattached their ropes with every maneuver to create a semblance of safety. Rather than be ironic that Dan is the one who dies, however, the choice is purely driven by narrative and suspense. Whereas Hunter slipping would just be game over, he gets to hang and swing for a bit while desperately trying to grab a handhold and relieve the pressure put upon the nut/hex/chock holding his rope in place. We get a beat to hope for the best before he disappears.

As can happen after a tragic accident, Becky has all but disappeared herself. She hasn’t climbed since the incident and barely leaves her house unless it’s to go to the local bar and drink herself into a stupor considering Hunter has gone to travel the world and livestream the death-defying stunts that she continues to perform despite what happened. Becky’s father (Jeffrey Dean Morgan’s James Conner—I mention the last name because it makes me laugh to think the filmmakers changed that one letter upon realizing last second that he wouldn’t have the same surname as his daughter’s husband) is the only one still around to help her grieve, but she cuts him off for the trouble. It’s as if Becky wishes she were dead too.

Well, director Scott Mann and co-writer Jonathan Frank are only too happy to push her into a scenario where that wish can come true. Initially conceived as a short for a project that ultimately evaporated, the two decided to expand their script and pitch it on spec to see if any backers had interest. And why wouldn’t they? Single-locale survival thrillers seem to be a cottage industry these days and this one has the potential for vertigo-inducing cinematography as its characters struggle to hang on. Fall is thus born courtesy of Hunter showing up out of the blue with a proposition. If Becky scales the defunct B67 TV Tower with her (2,000-plus feet of ladder straight up in the middle of the desert), maybe she can finally move on.

It’s possible. It’s also very psychologically reductive. This whole movie is pretty much Hunter telling Becky not to be a baby because she didn’t used to be a baby before her husband died. There’s tough love and then there’s narrative convenience—something Mann and Frank lean on with every facet of the film until it feels like they wrote it backwards. That choice delivers tedium because trying to be cute by making everything fit perfectly like a puzzle often removes any room for actual suspense. By creating a shallow infrastructure that does little beyond moving its two-dimensional characters forward to their next checkpoint, everything that occurs along the journey becomes plot specific. A snippet of Becky pole-dancing (the only non-climbing/non-Dan detail about her life) becomes foreshadowing, not complexity.

The same goes with the only flashback of Dan and Becky pre-accident. If you’re just showing one, there must be a reason (and there is). The same applies to a “lifehack” Hunter teaches Becky in the diner they visit the night before setting off for the tower. Mann and Frank hold our hands as they gradually lead us through the clichéd adage of “getting back on the horse” to remember life’s preciousness can be as exhilarating as it can be debilitating. Don’t therefore waste any time questioning how these women could climb to their deaths without even considering what can go wrong. Because besides consciously bringing zero food despite the energy they’re expending demanding some electrolytes at least, why wouldn’t these adrenaline junkies just base jump back down?

The answer: there’s no movie if they do. And that’s inherently the problem with this niche corner of the thriller genre. Placing your characters into these wild circumstances often requires stupidity. It can be those same characters making silly mistakes, us constantly looking the other way because we’d rather turn our brains off and enjoy the ride, or a mix of both like it is here. You either take everything with a heavy grain of salt or ready yourself for an eternity of half-baked emotional beats working beyond their limits to bide time before the next stunt. Fall is thus exactly what you need it to be (for those excited to watch it) or exactly what you thought it would be (for those dragged in by their friends).

Because the characters are ciphers. Becky’s presence is equal to Dan’s absence, both are pawns serving a purpose for the real star: the location. The tower’s rusty bolts, the deserted wasteland expanse, the height causing cell reception to be non-existent, and the vultures circling for food. You can’t experience drama from just standing below this hunk of metal, though. You need expendable assets to place upon it to watch how it will punish them. All that talk about closure is an excuse to get Becky there. Hunter’s excitement is to satisfy her fans and mask her own secret guilt. When the filmmakers finally do decide to throw a curveball, it lands with a thud because they naively forgot certain twists only work if we care about the players.

Maybe you will. I unfortunately did not. The good thing, however, is that this fact doesn’t negate the craft or genuine tension built regardless. Partly due to budget constraints and partly because he knew it would deliver a better product, Mann avoids a greenscreen soundstage to create real sets mimicking the on-screen scenario. Currey and Gardner are acting on a sixty-foot structure (and a five-foot facsimile for close-ups) constructed atop a mountain to allow moments in profile with the sky to feel authentic. The large number of shots without a visible ground for scale hurts the illusion (those that composite it in are effective), but things eventually move away from action and towards drama anyway. That shift once again demands personal investment, though—something the script never provides.