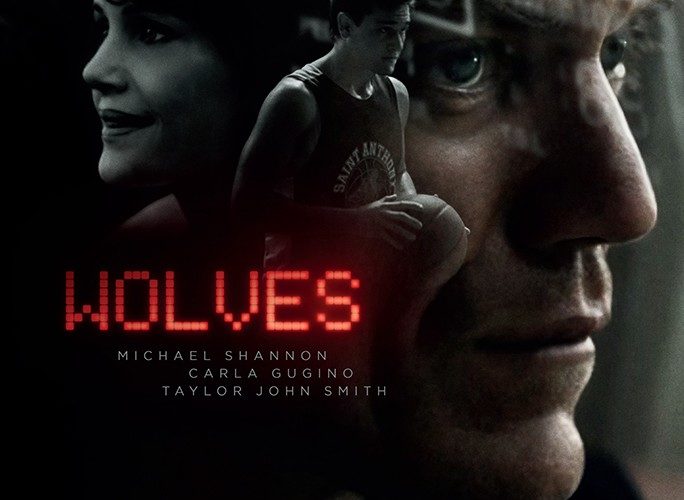 “I was never good with women,” someone states midway through Bart Freundlich’s coming-of-age basketball drama Wolves. “Great jump shot, though,” he finishes. This sentence is meant to function as an antithesis towards the protagonist, “Saint” Anthony (Taylor John Smith), a prodigy at his school who has it all: he’s point guard on his winning high school team, he has a sweet and caring girlfriend, Victoria (Zazie Beetz), and he is being scouted by Cornell for his skills on the court. To top it off, we’re led to believe he has a good heart. Unfortunately, things aren’t as good for Anthony on his home front, where his dad, Lee (Michael Shannon), is an English teacher with a duplex of addictions, and his mom (Carla Gugino), often at odds with his father, is upset that he’s leaving for college. When Anthony finds out the college fund has been drained due to Lee’s gambling, things begin to unravel. Well, sort of. And therein lies the sore thumb to that opening sentence: what should stand as a moment to further our admiration for Anthony instead serves as a parable for Anthony himself, and thusly, the film’s shortcomings — one whose narrative and thematic trappings are tangled up in a self-righteous love of a character that is neither sympathetic nor complexly woven.

Because the truth is, Anthony isn’t a good boyfriend. Nor is he a particularly good guy. Yet at every turn, his often misguided, or, to be quite frank, testosterone-fueled choices are left without consequence. When he shouts at his girlfriend that he never wants to see her again, she returns to him later in the film without second thought. When he uses a move his dad teaches him — sliding onto the abusive scale of parenthood at the same moment — he is not reprimanded for it, despite it being a flagrant foul and clear attack on another player. Anthony does not learn as his character progresses, and his actions do not suggest someone who is growing.

During one of his hard-edged lectures, Lee states that with characters in a narrative, “at a certain point intention doesn’t matter. It’s about what you do.” Then he scrawls the letters big: EXECUTION. By this standard of character, Anthony is not one worthy of sympathy or analysis. He stumbles through a privileged life where his enraged and selfish choices bear no consequence outside of his own brooding, staring out rain-soaked train windows or trashing his locker room with childish rage. Regardless of his thoughts or feelings, his actions are continually self-centered.  At a rare moment, Anthony sacrifices looking like the star player so he can pass the ball to his friend — one who serves as the fumbling, ethnic comic relief. This actually works as a narrative technique to build empathy around Anthony by making him seem like a good guy — while being a bit exploitative — but it is not motivated by anything before it, nor does it affect or change anything after it.

This is exemplary of the way in which the film is assembled, with threads and ideas left barren before reaching a climax — including a crucial one with his father in the closing moments — or, short of that, any sort of recurring mention at all. Plot points, including abortion, are touched upon for the sake of their presence, without their impact or consequences delved into with a critical eye. Freundlich does a commendable job of establishing most of his technical choices earlier on, but, like one of Lee’s character rules, he violates his own lexicon when he introduces new stylistic choices late in the game. This is a shame, because Wolves has moments and ideas worth salvaging. There are strongly edited sequences that focus on rhythm and movement, which function nicely as a meditation on athleticism and flow. These are accentuated by compelling techniques that blend diegetic and nondiegetic sound to create a strong mood and atmosphere. Performances are mostly strong as well, with the supporting cast all giving the young Smith a lot of breathing room and emotions to bounce off. But by the time the credits roll, these stronger components all feel like they are in service of a film with more digressions than conclusions, and more on its mind than it knows how to say.

A summary of the film lies in a quiet moment between Anthony and Victoria: Anthony practices alone in the gym, shooting jumpers. Victoria walks in and makes a flirtatious joke about how she heard Anthony has a “spot” on the court where he’s always gold with the ball. Anthony confirms that he has that spot. Bang, there’s set-up for a do-or-die moment during an important game. But when that crucial moment does come in the third act, Anthony stands at a different spot with the ball. And despite his skills with the rock, the film around him misses the mark.

Wolves is now in limited release and on VOD.