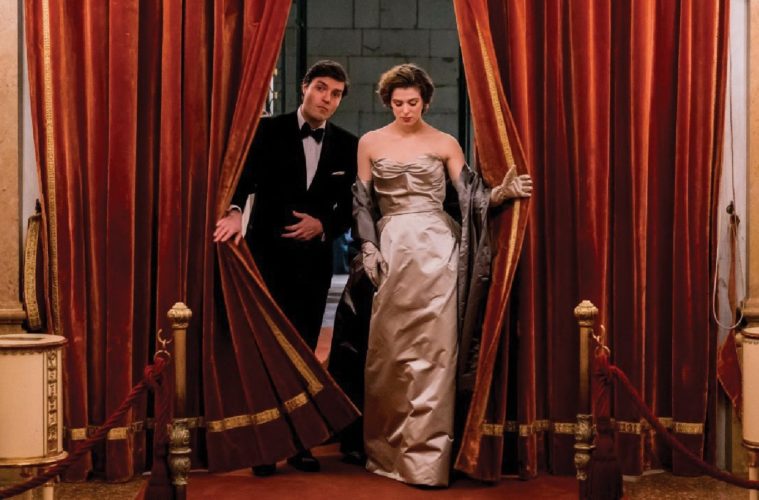 As 2019 draws to a close, the busy cinephile can mostly be found in his or her natural habitat, the theater. However, there are lots of books to catch up with once Oscar season is finished—or, at least, dies down. Let’s start with two killer eBooks.

Tour of Memories: The Creative Process Behind Joanna Hogg’s The Souvenir and The 2019 Canadian Cinema Yearbook (Seventh Row)

One of the finest film-related texts of 2019 was the Seventh Row team’s analysis of Mike Leigh’s Peterloo, and this series of deep cinema exploration continues with Tour of Memories: The Creative Process Behind Joanna Hogg’s The Souvenir and The 2019 Canadian Cinema Yearbook. Both eBooks are once again edited by two of the smartest, most readable writers on film art, Orla Smith and Alex Heeney. In Tour of Memories, Smith and Heeney study The Souvenir’s place in Hogg’s oeuvre, and in doing so, heighten one’s understanding of the film and its meaning. It is, they explain, “Hogg’s first period piece, her first coming-of-age story, and her first film to centre a young female protagonist.” It is also the story of a relationship that is “unambiguously toxic.” The Souvenir is a dense, complex film—one that requires an analysis like Tour of Memories. Meanwhile, The 2019 Canadian Cinema Yearbook highlights important but unjustly ignored recent Canadian releases like Patricia Rozema’s Mouthpiece and Keith Behrman’s Giant Little Ones. (Along with Smith and Heeney, Yearbook was co-edited by Brett Pardy and Mary Angela Rowe.) Together, these Seventh Row eBooks tackle films that deserve serious respect and analysis. (Note that you can gift one of these books here.)

The recent, endlessly asinine Scorsese vs. Marvel controversy was unpleasant for anyone who cares about cinema. It did, however, offer a reminder of the wonders of the New Hollywood movement in American cinema. The recent essay collection When the Movies Mattered: The New Hollywood Revisited features ten insightful contributions from a murderer’s row of writers—J. Hoberman, Molly Haskell, David Thomson. Subjects vary from Zabriskie Point and Chinatown to Rocky and The Killing of a Chinese Bookie. The effect is both uplifting and somber; the Hollywood of today could not seem more different.

The Rotten Tomatoes team and many of your favorite Film Twitter folks—Bilge Ebiri, Jessica Kiang, Eric Kohn, K. Austin Collins, Kristen Lopez, Jen Yamato—are represented in this cheerful, delightfully readable collection. What makes Rotten Movies We Love so unique is its level of inclusion. Yes, there are obvious “bad movies,” like Road House, Zardoz, and Cocktail. But also here are lesser movies from master filmmakers—Hook, Marie Antoinette, The Portrait of a Lady. (Count me as a fan of all three.) Any book that celebrates Ishtar and Jennifer’s Body deserves to be devoured.

The critical reevaluation of Eyes Wide Shut in the twenty years (!) since its release has been a joy to behold for those who adored the film at first sight. Perhaps the most welcome and necessary element of that reappraisal has arrived in the form of Eyes Wide Shut: Stanley Kubrick and the Making of His Final Film. The book is an immaculately researched account of the film’s creation—from Kubrick’s initial interest in Schnitzler’s Traumnovelle to the lengthy production—and beyond. The analysis of its themes and meaning is strong, as its exploration of Eyes Wide Shut’s “afterlife”: “Like all of Kubrick’s films, Eyes Wide Shut is settling into the cultural unconscious.”

Batman: The Definitive History of the Dark Knight in Comics, Films, and Beyond by Andrew Farago and Gina McIntyre (Insight Editions)

The most gorgeously designed, exhaustively researched comic book-centric book I’ve seen this year is certainly Batman: The Definitive History of the Dark Knight in Comics, Films, and Beyond, from Insight Editions. It features nearly 400 pages of character designs, comic covers, film stills, and production photographs from the Caped Crusader’s long, storied history. And like many of Insight’s books, it also features unique extras—including, among others, a paper Bat-mask. Most interesting is the deep dives into the productions of Burton and Nolan’s films, and also how they connect to the work of Alan Moore and Frank Miller. This is a doorstop-sized keepsake and a must-read for Dark Knight fans.

Two pricey but more-than-worth-it pop-up books from Insight Editions rank among the most ambitious releases of 2019. Star Wars: The Ultimate Pop-Up Galaxy, written by Matthew Reinhart and illustrated by Kevin M. Wilson, is a complex 3D stunner featuring scenes from The Phantom Menace through The Last Jedi. (The wee Ewok village is especially delightful.) It even folds into a 37-by-44-inch diorama that simply needs to be seen in person.

Just as memorable is Insight’s Harry Potter: A Hogwarts Christmas Pop-Up. It’s an advent calendar, really, with 25 hidden compartments and a pop-up Christmas tree. Also included is a 96-page book highlighting holiday moments in the films.

It’s been a decade since the release of Duncan Jones’s Moon, the splendid sci-fi drama starring a never-better Sam Rockwell. To commemorate its 10-year anniversary Titan Books has released Making Moon by Simon Ward. An in-depth look the film deserves, the extensive use of miniatures is well-documented and Clint Mansell’s score gets its own chapter.

Netflix’s prequel series The Dark Crystal: Age of Resistance is a recent release, but has already earned a making-of book. Inside the Epic Return to Thra (Insight Editions), by Daniel Wallace, offers a unique, up-close look at the haunting puppets that make this new Dark Crystal story so memorable; the designs are sometimes disturbing but always delightful.

Whatever one’s thoughts on IT Chapter Two—I found it to be an enjoyable mess—there is no denying that Andy Muschietti’s two-film Stephen King adaptation warrants some exploration. The World of IT by Alyse Wax (Abrams) deepens one’s appreciation of both chapters, especially the thoughts behind the look of Bill Skarsgård’s Pennywise.

And even though it’s only been a few months since the finale of HBO’s zeitgeist-capturing Game of Thrones, longtime fans might be aching for a return. Three giant, genuinely breathtaking new books from Insight Editions, then, will be appreciated by many viewers. My personal favorite is The Photography of Game of Thrones, written by Helen Sloan and Michael Kogge, a glossy collection of on-set photos and stills. Also impressive are Game of Thrones: The Costumes, by Michele Clapton and Gina McIntyre, and The Art of Game of Thrones, by Deborah Riley and Jody Revenson. The latter makes one long for an animated series adaptation—a thought I’m sure has crossed the minds of HBO execs.

Speaking of the world of Harry Potter, the colorful and cartoony Exploring Hogwarts: An Illustrated Guide by Jody Revenson (Insight Editions) is a gloriously fun walk through the wizarding school’s interior and exterior. The “making of” illustrations are also a delight.

Meanwhile, Stranger Things: Visions From the Upside Down (Del Rey) features Hawkins-inspired artwork from more than 200 artists. It’s hard to judge whose work is most effective—some go a lighter, more humorous route (Dave Pryor and Reynaldo Paez are two examples), and others go much darker (Tomas Hijo’s fairy tale-esque piece).

Lastly, the smallest artbook in our roundup is Star Wars: The Complete Marvel Comics Covers Vol. 1 (Insight Editions). I mean literally small—less than four inches high, less than three inches across. These run from the wild 1970s (hello, Jaxxon!) to the present day.

Other recent books with a link to the world of cinema Cinematic Cities: New York (Running Press) by Christian Blauvelt, a wonderful Turner Classic Movies release documenting where to eat, where to drink, and what to see in the Big Apple. Several films are deservedly highlighted, including Do the Right Thing and Rear Window.

Jafar Panahi Interviews (University Press of Mississippi), edited by Drew Todd, is an insightful collection of interviews with the Iranian filmmaker from throughout his career — The White Balloon to Closed Curtain. His comments on his conflicts with the Iranian government are noteworthy. (“I can’t understand how anyone can even bring up the term ‘house arrest’ when I am still making and releasing new films.”)

Phoenix: Liberte, Egalite, Phoenix! is a told-by-the-band history that summarizes the career of a group with numerous links to cinema, from spouses (Sofia Coppola) to soundtracks (Marie Antoinette, most notably).

And a trio of books about the late Fred Rogers–Mister Rogers’ Neighborhood: A Visual History (by Fred Rogers Productions, Tim Lybarger, Melissa Wagner, and Jenna Mcguiggan; Penguin Random House), Kindness and Wonder: Why Mister Rogers Matters Now More Than Ever (by Gavin Edwards; Dey St.), and Everything I Need to Know I Learn From Mister Rogers’ Neighborhood (by Melissa Wagner; Potter)–are a nice follow-up to Marielle Heller’s A Beautiful Day in the Neighborhood. The Visual History even concludes with some info about the Tom Hanks-starring biopic.

Harryhausen: The Lost Movies by John Walsh (Titan Books) is a loving, beautifully illustrated examination of the stop-motion legend’s unrealized projects, including designs for The Empire Strikes Back and Dune. The latter two were “turned down by Ray.” Lastly, the latest edition of 1,001 Movies You Must See Before You Die (B.E.S.) is updated to include Sorry to Bother You, A Star is Born, and, err, The Greatest Showman. Nonetheless, the long-running movie guide remains a worthy addition to any film lover’s library.

The Star Wars machine does not waste any time. Consider that Disney’s Galaxy’s Edge theme park just opened in Disneyland and opens in August at Disney World, and we already have a tie-in novel. Galaxy’s Edge: Black Spire (by Delilah S. Dawson; Del Rey) is a gripping spy story that ties in directly with the theme park. Meanwhile, Alphabet Squadron (by Alexander Freed; Del Rey) is a brisk read about New Republic pilots. The story even features Rebels favorite Hera Syndulla. But the most interesting novel of the bunch is Resistance Reborn by Rebecca Roanhorse (Del Rey). It acts as a bridge between The Last Jedi and Rise of Skywalker, and is particularly juicy for Poe Dameron fans. Also new are three fun Star Wars diversions— Star Wars: How Not to Get Eaten by Ewoks and Other Galactic Survival Skills by Christian Blauvelt (DK), Be More Leia (DK), and Be More Lando (DK). The latter two are self-help-y books for the Wars fanatic, while How Not to Get Eaten offers useful tips on topics like “What Happens When Hyperspace Goes Wrong?” and “How to Rescue a Princess.” And in the world of Marvel we have The Marvel Book by Stephen “Win” Wiacek (DK), a text-heavy exploration of the Spider-Man Multiverse and Groot’s backstory.

Finally arriving on Blu-ray just days before the release of The Irishman was one of Martin Scorsese’s spiritual masterpieces, Kundun (Kino Lorber). Featuring career-high work from Roger Deakins and Philip Glass, the story of the 14th Dalai Lama is tremendously moving. The Blu-ray release includes a number of noteworthy features, including the 85-minute documentary In Search of Kundun.

Finally, the most newsworthy Criterion release of 2019 is likely Wim Wenders’ 1991 sci-fi road movie Until the End of the World. This is the 287-minute director’s cut of the notoriously butchered film, and my goodness, this is an impressive release. While it is packed with bonus features and including two strong essays (from critics Bilge Ebiri and Ignatiy Vishnevetsky), it is the film itself that most intrigues. What a way to end 2019.