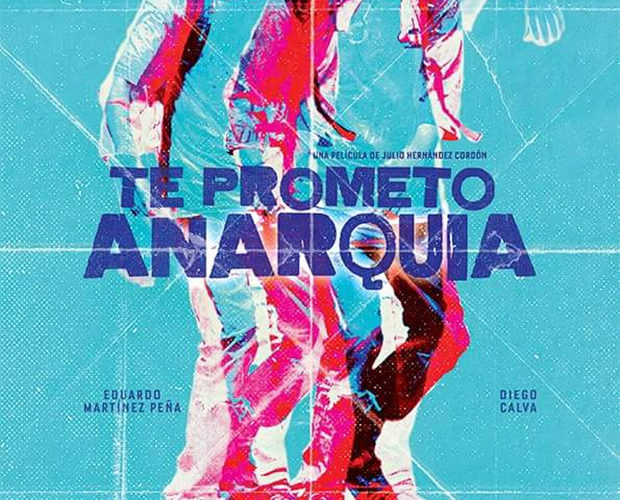 [ND/NF Review] I Promise You Anarchy

I Promise You Anarchy, by writer-director Julio Hernández Cordón, titillates equally with its queer sensuality and noirish crime, neither of which is entirely the point. In what plays like a modern take on The Godfather, queer sexual politics and Mexican machismo rasp upon each other, filing the young criminals at its heart into husks.

Miguel (Diego Calva Hernández), a big-fish-in-a-small-pond gangster, wears his racket around his neck. A necklace adorned with a set of plastic vampire teeth explains his blood-selling racket to corrupt paramedics while symbolizing a much darker thrall. Like any good local criminal, the youthful Miguel takes care of his own. From the skateboarders he rolls with to the old men who run the gay strip club in his area, everyone respects him.; people drop everything for him, and he knows who is worthy of his protection. His life is complicated by his relationship with Johnny (Eduardo Eliseo Martinez) — not just romantically, but financially and managerially. To make matters worse, Johnny’s dating a girl, Adri (Shvasti Calderón) — a fact that Miguel hates, for it’s a threat to his control.

Juxtaposing their sexual relationship with the power dynamic between a gang leader and someone who’s not even his right-hand man, dominance and careless romanticism mesh in a romantic and professional setting. The boss is sleeping with the secretary, but their business is bootleg blood in a world still stigmatizing gay relationships. AIDS and hepatitis loom heavily as yet another taboo within their relationship, but serve as just one of many complexities in queer crime. Gangsters sling slurs at one another, homophobia flourishing inside those who (almost openly) are queer. The puffed chests care nothing for matters of the heart.

Yet difficult, multi-faceted subject matter flows like water from Cordón. Expert use of color and sound soothe or drive up tension depending on whether our setting is a calm, lightly painted skatepark or the dull din of a dozen skateboards rolling on cobblestones. Cordón’s grasp over the possibilities of concrete, asphalt, and fluorescent light has a Tangerine– or Fruitvale Station-esque vision of urban comfort. Each corner contains a dingy depth, finding levels of intimacy in the decay. Back alleys, empty film sets, abandoned propane tanks, and noisy, circular brick pavilions are characters all their own.

I Promise You Anarchy is intense, interesting, and intricate without being complex, though it sometimes loses threads of its plot. When a real gangbanger shows up to one of Miguel’s blood deals — where a group of people give blood for a cut of the exorbitant profits — we immediately feel the danger. Sex has been power, love the highest fantasy, until harsh reality lays a gun on the dashboard. The ensuing complications ruin Miguel and Johnny’s innocence, making you realize that they’re just kids. They live with their mothers. The delicate line between fantasy crime, whose freedom is the teenage Golden Fleece, and the plague of ruthlessness affecting much of Mexico has been crossed. The myth of the Golden Fleece has been debunked, and the fallout is a beautiful, messy, and sad contemplation of the price of romanticized anarchy.

I Promise You Anarchy screened at the 2016 New Directors/New Films Festivals and is currently without U.S. distribution.