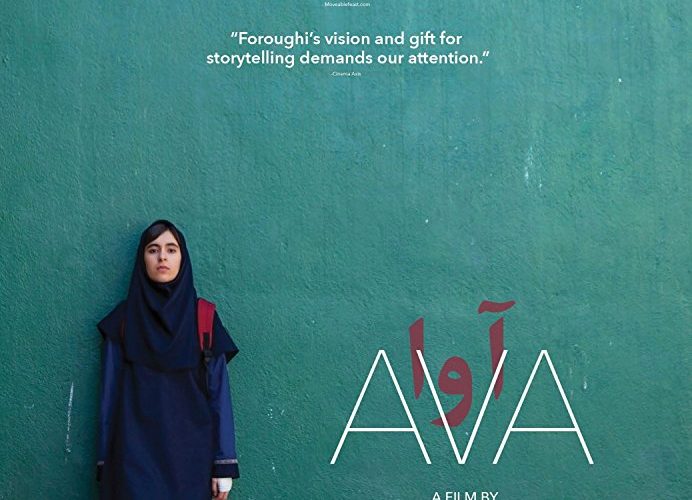 Sadaf Foroughi’s fulminating debut feature, Ava, may strike a few chords among Persepolis enthusiasts. A role-model schoolgirl turned rebel, its eponymous teenage girl is a rollicking blend between Marjane Satrapi and Vincent Paronnaud’s black-and-white punk teen and The 400 Blows‘ Antoine Doinel – a heroine fighting to reassert her freedom in the face of an ultra-conservative environment. Tehran-born, Montreal-based writer-director Foroughi draws from her childhood memories to conjure up a gripping coming-of-age story where the claustrophobic relationship between an overprotective mother and her teenage daughter acts as a synecdoche to expose a patriarchal society eager to chastise whatever falls outside its rigidly policed norms.

Premiered at TIFF in September 2017, where it nabbed the Discovery Award, Ava follows its titular 17-year-old (Mahour Jabbari), an impeccable student and promising violinist from an upper-middle-class Tehran family, whose life starts crumbling after her mistrustful mother (Bahar Nouhian) subjects her to a revoltingly humiliating punishment: having heard Ava met with her musical accompanist, Nima – a teenage boy the girl saw during a chaste and daytime public park date – she drags her to a gynecologist to ensure the family honor is still intact. It is a belittling treatment that sets in motion Ava’s rebellion against her family and the system that normalized that affront – a struggle for emancipation that leads the girl to clash with her parents, schoolteachers, and friends.

Immersed in a very country-specific context as it may be (filmed in Tehran and spoken exclusively in Farsi), Foroughi’s debut has a universal flair. Ava’s coming of age touches upon issues akin to any other teenage girl in the world – boys, make-up, clothes – and Foroughi shows a perceptive eye for the syncretism inherent in her heroine’s age, nailing some wonderfully endearing shots when the focus turns to the teenager’s clumsy and playful transition into adulthood – an early scene featuring Ava and her best friend Melody (Shayesteh Sajadi) trying lipsticks and mascara ranks among the film’s most tender moments.

The proximity of Ava’s teenage dreams and the constant humiliation to which she is subjected are a powerful crowd-pleasing recipe. But while it is hard not to feel for Ava, rooting for her is somehow just as difficult. Foroughi’s script crafts her in ambiguous terms. Her crush on Nima is portrayed more like a bet between girlfriends than genuine affection; as her anxiety turns into self-harm, the script somehow lags behind, leaving her most extreme actions a tad too on-the-nose to feel realistic, and, when faced with a potential expulsion from school, she is happy to lie and have others punished in her place.

Ironically, that her fight against authorities feels so captivating is probably courtesy of the authorities themselves. The power figures Ava is up against are exquisitely crafted: Nouhian’s transition from vigilant mother to panoptic-like prison guard is remarkable, but the school’s puritanical headmistress, Ms. Dehkhoda (Leili Rashidi), is the real scene-stealer. White-gloved and ice-cold, when rumors a local girl got pregnant spread out she spitefully warns the student body to steer clear from animalistic drives (“isn’t there a difference between you and rabbits?”), encouraging the young girls to follow a strict “see something, say something” policy that further alienates Ava from her friends. The combination of her nauseating self-righteousness and profound disgust for the girls’ sexual maturity make her a villain one can hardly avoid despising, nor turning their eyes away from.

For a feature whose budget only allowed a mere 18 shooting days, the way Foroughi designs and composes her shots is spellbinding. From an aptly chosen palette – blue hues reflecting the rooms Ava shares with parents and schoolteachers, orange lights warming her bedroom when she is shown there with Melody – down to the architecture shaping each shot – rooms and doorways getting more constraining as pressure around Ava mounts – she excels at adjusting the mise-en-scène to her character’s entrapment. In turn, the camera adding to the claustrophobia by gradually shifting from wide takes to more constraining close-ups, and culminating in a fourth-barrier-breaking shot reminiscent of Jean Pierre’s Léaud’s unforgettable stare at the end of The 400 Blows.

Calling Ava eye-opening or ground-breaking may be a bit of a stretch. Taboo as it is, the issue of female freedom in contemporary Iran has already featured in much older films (aside from Persepolis, think of Rasoul Sadrameli’s 2002 I Am Taraneh, I Am Fifteen Years Old), but Foroughi’s assured debut remains a welcomed and insightful reminder that the patriarchy Ava struggles against is still alive and kicking. Stories like hers will hardly ever grow old.

Ava plays on March 29 and April 1 at New Directors/New Films 2018 and will be released by Grasshopper Film on April 27.