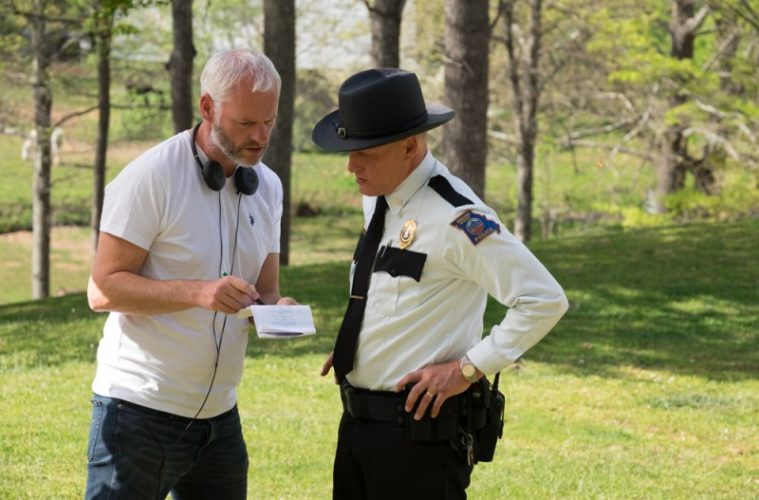 Irish-British writer/director Martin McDonagh has gained cult followings both in the theater world, for plays like The Beauty Queen of Leenane and The Cripple of Inishmaan, and among cinephiles, thanks to the Academy-Award-winning short Six Shooter and In Bruges. His work on both stage and screen stands out for its grounded approach to absurd situations, as well as his nuanced treatment of deeply flawed characters.

McDonagh’s newest film is Three Billboards Outside Ebbing, Missouri, featuring Frances McDormand as a woman who goes to war against her small town’s police department over her daughter’s unsolved murder. We sat down with him to speak about the film and his idiosyncratic writing process.

The Film Stage: Your scripts don’t follow the usual conventions of Save the Cat screenwriting. Do you follow a story as it goes along? Do you plan certain things out beforehand?

Martin McDonagh: No. Particularly with this one, nothing was planned beforehand. Mildred’s character kind of popped up, and the idea of her putting up this outrageous message was all I had. But that was enough. I just sent her spinning, and then set up the police on the other side. And everything grew organically from that. I think that’s why it’s surprising from scene to scene. Like, I didn’t know what was gonna happen next, and I think the audiences hopefully don’t too. But that’s been true of all my work. I never plot a film out beforehand like Robert McKee says you should.

Once you’ve found the conclusion to a story, how much do you go back and it around to make things fit?

I don’t know what the ending is until I’m maybe 20 pages away from it. Usually things have hopefully started falling into place as you approach the middle, enough to know that you’re heading toward the end. But I’m always happiest not knowing how it’s gonna conclude. And I think this film, more than any of [my others], shows that. It could kind of go any way, this one. And there are red herrings along the way as to how it could end.

But even the big thing that happens in the middle of the film with Woody [Harrelson]’s character, I didn’t know that was gonna happen until like a scene or two beforehand. And that changes it up completely, what the second half of the movie could be.

You said this started with Mildred’s character. Do you use other ideas you have for characters? Or do the characters naturally arise as you write?

With this, I knew that anyone who put up a series of stunts like she does, with that kind of message, you knew what characteristics she’d have instantly. She had to be brave and angry, but someone who just didn’t give a shit anymore about saving herself. The drive of a character like that all sprang from that image, almost. So that was very organic this time around.

In Bruges, that happened organically too. I knew it had to be two guys who were in a place, and one of them didn’t want to be there and one did. The reason for it fell into place pretty quickly too. But again, plot-wise, that’s all that happens for a long time – just two people talking about a town.

You give a lot of characters, even incidental ones, hints of greater interiority and things happening for them outside of the story.

For me as a writer, there are no secondary characters. Everyone could be like us in real life. We’re the lead character in our film, but everyone else doesn’t realize that. You know what I mean? So I think of Peter Dinklage’s character in this, or John Hawkes. When they go offstage, they could have a very interesting film of their own. You’ve only got them both for two scenes in this. You have to show that, they have to be fully formed and as interesting. The trick is to try and make your secondary characters as interesting or more interesting than your lead. And the opposition of that usually can help propel the plot, too.

Your most recent two films have been set in America. Do you find there’s any major difference between writing American and European characters?

I don’t think so. I don’t feel that way. If I’m writing an American script, I have very strong American voices in my head. Which I hope is as much or more about having traveled around America and listened to people in small towns and big towns, and having a love of all of those things, rather than a love of movies, of American movies, you know. Because you can fall into that habit if you’re just copying notes.

But right now, I’m equally happy writing Irish characters as American characters. It took me a while to write British characters. I only had my first play that had English characters a year and a half ago; I’ve always kind of avoided that a bit. But that felt good. But no, I feel the ease, because I’ve spent so much time over here over the last 20 years, I kinda feel the ease of the American idiom.

Why did you set Three Billboards in the Midwest, specifically?

Well, I knew it had to be one of the old Southern states, one of the old 13, just because of the racial tensions that were the backdrop to the story. Also there had to be a rural, lonely road, that was the image of where the billboards needed to be. I knew it couldn’t be too far on the East Coast or even West Coast. But I also liked the idea of it being a place where films aren’t usually set, your nontypical small town. It was important to find a kind of iconic and beautiful small town, too.

Missouri, I quite honestly just picked it because it had three syllables, and it scanned well. But it’s interesting that in the last few years – it was written eight years ago, the script – in the last few years, all those racial aspects almost made us wonder ‘Should we keep it there?’ ‘Is it gonna be saying too much about Missouri as a specific place, when it could’ve been any of those Midwest states?’ But we sort of decided that that was the original plan, so we shouldn’t be scared of tapping into those issues.

What’s it like to see these issues come to the fore of cultural discourse right as this long-gestating project comes to fruition?

I’m still waiting to see how that plays out. But I do like how the film, as much as it starts off as being about rage and anger, is more about hope and change. I like that we’re putting a film out at this time in America and in the world that is about those things. It’s not just about showing a warts-and-all picture of America. It’s kind of trying to get beyond that and see the people behind it.

Yeah, so it’s gonna be interesting to see … Is it gonna be kind of zeitgeisty? Is there gonna be any kind of controversy about it? It’s been pretty good so far. People have seemed to see the hope and the humanity in it.

I think that they also find a lot of vicarious catharsis in watching a character who gets to act out in ways that a lot of people wish they could.

Yeah, yeah. I mean, Frances, you just latch onto her and hold on tight. There’s a joy in following her, and not knowing what she’s gonna do next. More than any of my other films, I can watch this over and over again because of her.

The script was written for her. It was written for Sam [Rockwell] as well. But if Frances had said no… the picture of Mildred in my head was so wrapped in her and in what I knew she could do, that we’d have been kind of screwed. I wouldn’t have known where to go as a second choice. There was no second choice. Because I knew she had all the integrity that you would need to believe Mildred, and she couldn’t have the baggage of your typical Hollywood actor. But because she’s a working-class character – and that’s both of our backgrounds – we didn’t want to be sentimental or patronizing. And there aren’t a lot of actors who could do that.

Three Billboards Outside Ebbing, Missouri opens in limited release on Friday, November 10 and will expand in the coming weeks.