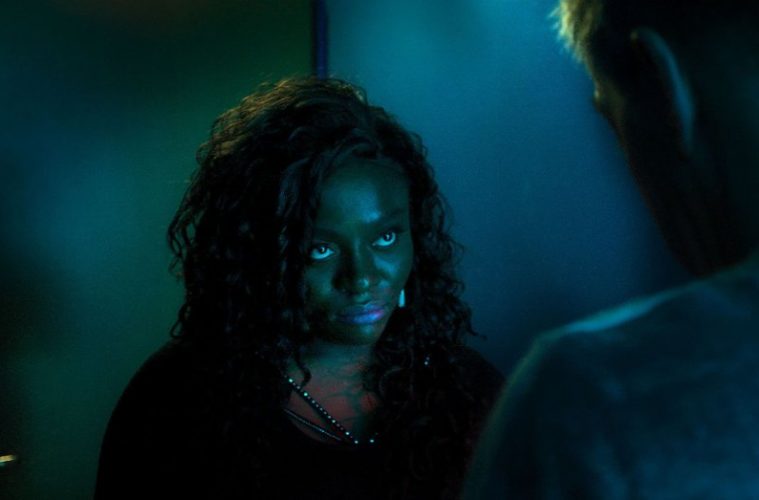 One need not take a class on the cinema of Todd Solondz to suspect that there may not be a great deal of joyfulness in a film called Joy (unless, of course, someone like Jennifer Lawrence is involved.) Indeed, the second narrative feature of Sudabeh Mortezai–an Austrian filmmaker of Iranian extraction–shows us a world with little time for life’s lighter emotions. The Joy of the title is Mortezai’s protagonist, a Nigerian woman (played by impressive newcomer Anwulika Alphonsus), who made her way to Europe to find a better life but instead found the world of forced prostitution, horrifically trapped in a spiral of debt to the very people who brought her over.

The reality of this nightmare makes Mortezai’s film all the more potent as she chronicles the various lies these women are told, opening on a scene in which a teenage girl named Precious (Mariam Sanusi) takes an oath with her village Juju doctor that will condemn her to the same fate as Joy. It’s a sequence that the director cleverly counters with an equally performative, almost surrealist piece of European Christian folklore later on. It quickly becomes clear that the crooks that await the women in Europe are not the only culpable parties involved.

The script is an original by Mortezai but may have some roots in the work of Exit, an NGO set up by a Vienna-based Nigerian-born writer named Joana Adesuwa Reitarer that documents the stories of victims like Joy. Exit recently estimated that 40,000 Nigerians are currently working in Europe as forced prostitutes. In the film, Joy even meets with a worker from an NGO (presumably based on Exit) in the hopes of prosecuting the woman who runs her brothel and gain her own asylum status in the process.

Mortezai shoots the drama with all the grit of a post-Dardennes social-realist film without wallowing too explicitly in her characters’ misery—an unfortunate trope, it must be said, of so many of the Belgians’ disciples. Remarkably, the closest Mortezai ever gets to showing any sexual violence on screen is when a woman is raped in an adjoining room as punishment for not making her weekly repayments. Of course, the withholding of images makes it all the more powerful and in the end it’s not only the screams that are haunting but also the close-ups on the faces of the other women as they are forced to listen on, mentally revisiting their own repressed experiences in the process.

To the director’s credit, Joy somehow expresses this world of psychological and physical torture without the need for any obvious gratuity. The film instead relies on suggestion and the horrors of systematic abuse and hyper-normalization. The brothel is presided over by a matriarchal Madame simply referred to as Ma (played by Angela Ekeleme), who justifies having the women beaten and assaulted by hiding behind that most depressing of word combinations: “just business.” The women must also endure humiliating scams from family members back home. Call the police or an ambulance and risk deportation. Pay off your debt and good luck finding somewhere else to go. The women who do survive seem to end up working as Madames, thus completing the cycle.

As the film gasps for air, it is Alphonsus’ performance that keeps us afloat. Joy is a mother so unlike the other women she has a more urgent goal to work towards. She’s also been inside this system long enough to see the strings and has developed a skin thick enough for it. Alphonsus, in her very first screen role, plays this with just the right amount of pathos, allowing the viewer to empathize with her character even in her most unnervingly pragmatistic moments. When Precious arrives Joy immediately is taken by her naivety, perhaps remembering a time when she herself was so innocent, even daring to break a smile as she overhears the girl calling her family on a payphone. Mortezai, however, is too grounded to comfort us with such easy sentimentality and it won’t be long before Precious is fully high-heeled and hair-extended, cracking jokes with the others about a client’s garlic breath. Joy will later tell her: “If I have to kill you to pay off my debt, I will.” Only a fool would put it past her.

Mortezai is certainly getting at something here and it is not a touching reassurance of hope in desperate times, but rather a brutal and yet strangely rousing truth about the human ability to adapt and survive.