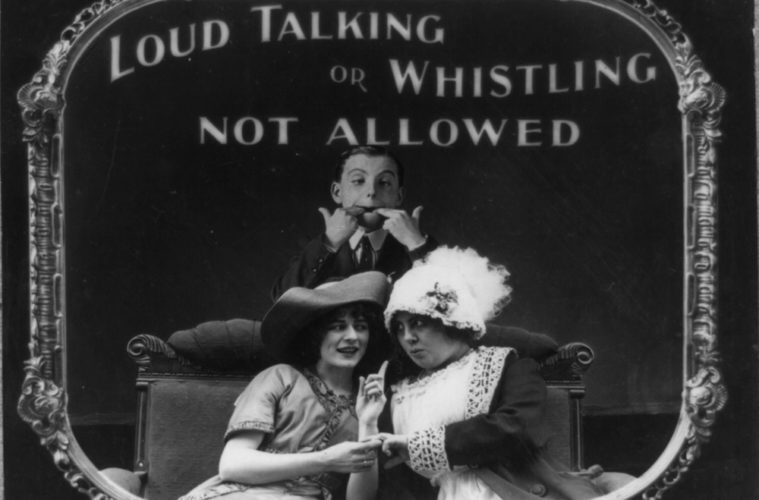 How to Behave in a Movie Theater, Courtesy of Posters from 1912 In terms of today’s audience behavior, it’s somewhat of a free-for-all at major theater chains, but there’s still a few locations such as Drafthouse and the ilk that adhere to a strict protocol of movie-going etiquette. 1912 may have been a simpler time, but rest assured, the problems in the cinema were no different a century ago.

As evidenced by a series of slides projected during the time, created by the New York firm of John D. Scott and Edward Van Altena, we can see the approaches to keep the audience at bay. Check out the series of slides above and below courtesy of Backstory (via Gothamist), some of which we wouldn’t mind seeing return to theaters. We’ve also included a 1916 New York Times excerpt from a letter to an editor that perfectly encapsulates many of our feelings about today’s movie-going experience, depending on the circumstances.

“It’s really a shame… so much time, thought, and money on these splendid productions of our New York theatres to have the whole effect spoiled by the untutored ‘enemies’ of their own house staff. The average usher from the movie house to the most exclusive temple of the drama seems to feel that the theatre is his private palace and we of the audience his ladies-in-waiting and his humble retainers and pensioners.” Which slide is your favorite? Should movie etiquette be more enforced today?