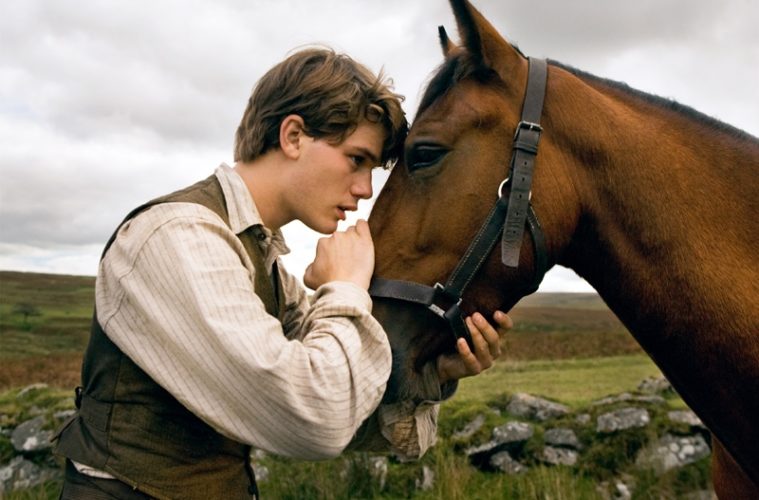 We won’t be seeing it until December, but Steven Spielberg‘s The Adventures of Tintin is already a bonafide hit overseas (our UK review here). But what about his WWI drama Oscar hopeful War Horse? The film, which hits just a few days after Tintin here in the states, won’t be appearing at any film festivals, and we haven’t heard a peep about the final product.

That all changes today, as DreamWorks is avoiding New York and Los Angeles, holding public-only screenings in heartland states and others such as Colorado, Oklahoma, Oregon, Pennsylvania, Maryland and Kansas leading up to its December 25th release. This is a strategy that worked for their recent smash hit The Help (over $175m in box office and on its way to Oscar glory), so it looks like they are trying to repeat the same magic.

I’ve rounded up the first impressions below which range from negative (some Oscar bait talk) to over-the-top positive (his best behind Schindler’s List?). We even have a 5-minute video review below, so check them all out and return as I’ll add reviews when they come in.

First full review comes in from MovieVu and one can see an excerpt below:

What it comes down to is “War Horse” is as flawless a film as we’ve ever seen from the director. Seeing something as brutal, terrible, and human as war through the innocent eyes of a noble horse is an ambitious form of storytelling, and yet it completely comes off as honest and authentic. I cried. I cheered. I felt like little more than a marionette, controlled in body and soul. It’s odd. This isn’t the work of the Spielberg we’ve come to know in the last two decades. This is something new. Back to basics, as it were. This is the Spielberg we had from the 70′s to the 90′s: powerful, gutsy, honest, and effective.

Am I the only person who basically hated War Horse? It was nothing more than manipulative and predictable Oscar bait. Move along…

Would def recommend War Horse to anyone who asks. Great movie, well worth the 2:20, never felt like it though. Very evenly paced.

An advanced screening tonight of Spielberg’s ‘War Horse’. Exceptional, truly. Do see it. Walked out of cinema into the falling snow. Lovely! Just left special screening of “War Horse” It actually was a good movie. Kept my interest

The movie was FANTASTIC! War Horse was awesome. A must-see.

Just saw ADVANCE SCREENING of STEVEN Spielberg’s, WAR HORSE. This is a must see movie based in WW1. Great story of boy and his horse This was AWFUL. Nothing but Oscar bait. I’m very disappointed.

I’ll be giving a full review early tomorrow (I need to let this brilliant film sink in a bit more), but I am DEFINITELY giving it 5/5. Actually, I’ll go farther than that. This was a masterpiece. This should be one of the top 2-3 during Oscar season. All the hype we were hoping for was well-deserved. Outside of the first 30 minutes being a tad “eh,” the rest of the film is the best I’ve seen of Spielberg in years. Some of the greatest scenes I’ve seen in his career. I’m going to go as far as to say that it’s my second favorite Spielberg film after “Schindler’s List.” First chance you get, go see it. There should be quite a few ore screenings leading up to its late December release. A+++!! Saw this movie a few hours ago in a pre screening.. It was really good and brilliantly made. I wouldn’t say its Spielberg’s best but it will get alot of Oscar attention. Its like 4-5 different stories wrapped up in a big long film. The horse ‘Joey’ touches alot of peoples lives. Peter Mullan does an excellent job as the father to the kid. Toby Kebbel, Tom Hiddleston, and the kid from ‘The Reader’ all have great supporting roles..

New John Williams music. I’m in heaven. WAR HORSE is a gorgeous, classic Williams score. I’ve missed this. John Williams will get his 47th Oscar nomination for WAR HORSE, no question. Maybe a 48th for TINTIN. Whoa. There’s a brief moment in “No Man’s Land” where Williams goes all PIRATES OF THE CARIBBEAN on us. OMG…the solo piano version of the main theme in “Remembering Emilie, and Finale” is breaking my heart. WAR HORSE first impression – Lacks the usual Williams concert suite of the main theme, but the overall score is a fantastic return to form. As Williams’ first dramatic score in 6 years, it is a godsend to fans, and one of the maestro’s finest in years. The final track, “Homecoming,” is a breathtaking 8 minute summation of the score’s themes. Tremendous Williams material.

YouTube user ChrisStuckmann also did a five-minute video review, which can be see below. He talks about how the trailer is much different than the actual film and how Spielberg never takes side in this story, among other things. DreamWorks Pictures’ “War Horse,” director Steven Spielberg’s epic adventure, is a tale of loyalty, hope and tenacity set against a sweeping canvas of rural England and Europe during the First World War. “War Horse” begins with the remarkable friendship between a horse named Joey and a young man called Albert, who tames and trains him. When they are forcefully parted, the film follows the extraordinary journey of the horse as he moves through the war, changing and inspiring the lives of all those he meets—British cavalry, German soldiers, and a French farmer and his granddaughter—before the story reaches its emotional climax in the heart of No Man’s Land.The First World War is experienced through the journey of this horse—an odyssey of joy and sorrow, passionate friendship and high adventure. “War Horse” is one of the great stories of friendship and war— a successful book, it was turned into a hugely successful international theatrical hit that is arriving on Broadway next year. It now comes to screen in an epic adaptation by one of the great directors in film history.