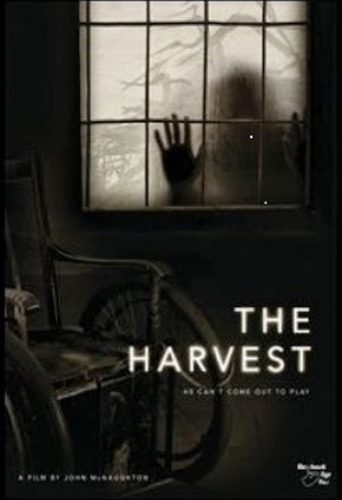 I can see why director John McNaughton chose Stephen Lancellotti‘s script The Harvest to be his first feature length film in thirteen years, but I’m not sure it was worth the effort. There are some cool aspects to the horror thriller that may have worked better if its 104-minute runtime didn’t tick along at a snail’s pace—a shortcoming I guess he has no one to blame but himself. A lot of questions are posed, crazy becomes crazy about halfway through with a genuinely startling revelation, and yet in the end the resolution comes off as more of a “duh” than “huh.” But the biggest disappointment of all comes from realizing Michael Shannon isn’t the one flying off the handle. That’s not to say Samantha Morton wasn’t up to the task, he simply carries those expectations like a badge of honor. The crux of the story is as follows: wheelchair-bound adolescent Andy (Charlie Tahan) has never known the outside world. Dad (Shannon’s Richard) would like to expose him to it, but Mom (Morton’s Katherine) is way too over-protective for those shenanigans to fly. So Andy lies in bed all day playing videogames, content that his one form of rebellion is to drag himself to his chair so he may tap the window and scare away the birds eating the dried-up corn stalks Mom put outside his room to watch. Yes, the stifling yet plausible premise cannot help itself from reveling in details as creepy as a kid spending his afternoons staring at corn while Katherine performs surgeries at the local hospital and ex-nurse Richard chats up a former drug rep for the volatile medication needed to cure his boy.

Everything changes, though, when the new girl in town Maryann (Natasha Calis) comes calling. Recently arrived to live with her grandparents (Peter Fonda and Leslie Lyles) after the death of her folks, we actually learn very little about her other than this one tragic element to her past. Instead of giving her character shape, she ultimately serves as nothing more than the catalyst for Andy’s already insane life to get worse. After entering his room through the window unbeknownst to his parents, what appears an innocent play date soon turns dark with Katherine proving none too pleased by the intrusion. But the damage is already done. Andy gets his taste of living like a normal human being and Mom turns from bad to worse by dishing out punishments without any real cause that we know of yet. She actually does have a good reason for acting this way—minus the supreme bitchiness. Since telling what that is spoils the show, I’ll just suggest you stick with it until this initial reveal halfway through before bailing. Why we need another hour from this point to end I’m not certain, but the payoff might be exactly what some viewers need to deem the whole a success. I’m sadly not one of them as I had hoped the extended run time would add more insight into the Whys and Hows rather than accept everything at face value to witness a fallout that brings nothing we haven’t already seen thrillers perform throughout the years. Basically Maryann continues coming back, secrets are uncovered, Katherine becomes more unhinged, and Richard treads water until he can take no more.

But it’s unfortunately all show. There’s an affair that possesses no stakes before ending up completely unnecessary to the plot; Fonda attempts to give Maryann advice but only comes off as an out-of-touch hippie in the process; and every other adult cultivates an often baselessly stern exterior towards both kids. So much happens and yet most goes beyond red herring status on the utility scale because we’ve already resigned ourselves to assuming everything falls by the wayside and thus is unworthy of our devoted attention. I still wanted to know what eventually happened to the children and whether Katherine plunged off the deep end, but I couldn’t stop my focus from constantly straying. Intrigue was quickly replaced by duty and the cast felt like they were doing little more than going through the motions by that time. I’m not sure stronger hands could prevent this script from going as far into melodrama as it does. Little things like not being confident enough to allow a forceful scuffle between Morton and Tahan exist on its own without extra—accidental—abuse made me roll you’re my hard. If presented correctly, a shove to the ground can be more powerful than breaking a couple fingers yet the filmmakers refuse to buy into a less is more philosophy. If they had, while also increasing the pace, The Harvest could have worked.

There are too many lulls as it is and the moments that do pique interest somehow always devolve into a screaming match because no one is willing to stand up to Morton’s fiery matriarch. She is a bright spot despite going for broke a few times too many because she has the unique ability to turn from smiling mother to demonic monster at the drop of a hat. This is another missed opportunity as a result since the film never delves deep enough to make it a depiction of mental illness above villainy. Shannon’s husband is too much of a doormat, Tahan’s Andy too helpless, and Calis’ Maryann too much of an outsider to the plot for that. They finally do converge to fulfill their roles as blatantly laid out, but it’s too little too late.

The Harvest is screening at Fantasia Film Festival.