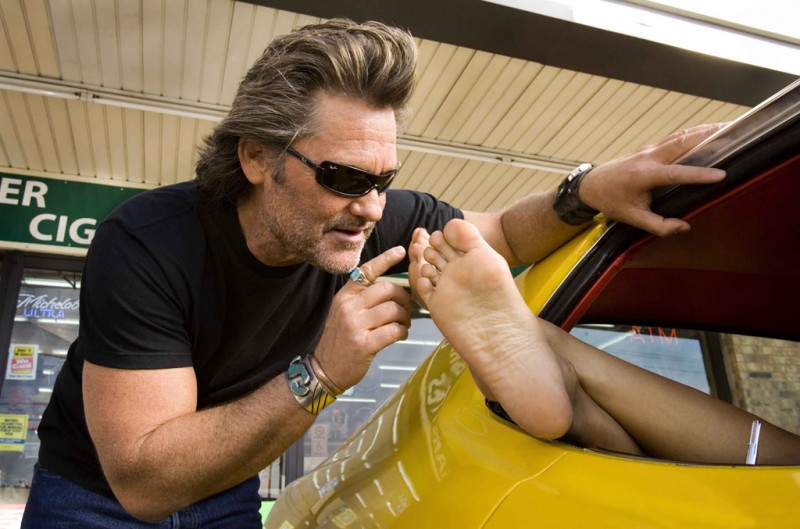 Grindhouse was intended to be the ultimate homage to the kinda cool, kinda sexy, kinda divine (but not too divine as to make you realize you’re still dealing with trash), kinda exploitation cinema on which Quentin Tarantino and Robert Rodriguez grew up. The directors sought to replicate the experience of the rat-infested midnight-movie houses that played kung fu pictures you’d later hear sampled in Wu-Tang Clan tracks. The beauty of the ’70s grindhouse experience was too large simply to be lost to time; but instead of repackaging the same, artists such as Tarantino found their voice within the homage via Kill Bill and Jackie Brown, which freely took music cues (and everything else) from movies like the pinky violence feminist revenge picture Female Prisoner #701: Scorpion, as well as damn near all of Pam Grier’s oeuvre. Death Proof in particular was supposed to be his ultimate gift to the movies he grew up on. The problem: no one saw it. While Tarantino has been largely deitized, ten years later, it’s still the only film from the director that hasn’t been reclaimed as some sort of lost classic, and the sad truth of the matter is that it should be. In indulging his own childhood film fantasies, Tarantino distilled the very vibe of his movies into a thunderous roar of total cinematic adrenaline and effortless cool.

On the surface, Death Proof appears to be a reworking of the ’70s muscle-car film, best exemplified by Vanishing Point, Two Lane Blacktop, and Dirty Mary, Crazy Larry. Vanishing Point in particular is this biblical text within the text of Death Proof — characters do everything from name drop it to seek out an exact replica white Dodge Challenger with a 440 engine to rev into the countryside for a little game of ship’s mast. To merely pin this as a sister film to Vanishing Point is nevertheless to undermine its true nature as a both a slasher film and girl-gang movie. When Stuntman Mike (Kurt Russell) appears with the crisp Austin, Texas sun baking the hood of his shatter-machine, it is a statement of foreboding that a bad man has just rolled into town. Tarantino emphasizes this by having the vehicle take on a Michael Myers like approach as it creeps along the streets following Jungle Julia (Sydney Tamiia Poitier) and her band of girlfriends to the tune of giallo soundtrack artists (e.g. Ennio Morricone and Pino Donaggio). Atop the hood is a skull and lightning bolts followed by a jet black paint scheme of all-encompassing intimidation for anyone who’d dare stand beside Stuntman Mike’s vehicular chrome sword. Let’s just say it’s a hell of a ride.

Kurt Russell’s cinematic image is one of an eternal badass — his Snake Plissken eyepatch, his flamethrower in The Thing — and, on the surface, Stuntman Mike seems to fall in line with those John Carpenter creations, but it’s a different Carpenter-Russell collaboration that Death Proof reveals itself as: Big Trouble in Little China‘s emasculated Jack Burton. There’s a clue for his characterization early on when he’s seen hanging out at the bar Jungle Julia and her friends crash with the same tank-top Burton wore in that 1986 film hanging in the corner alongside all the posters of films everyone has seen within Tarantino’s universe. Mike’s even self-described as a teetotaler who can’t hold his alcohol, building up to his one big drink of the evening: a virgin piña colada. It’s now clear that the car’s over-compensating for something, and that Jungle Julia and her pals are actually the coolest motherfuckers in the room. By so clearly clipping his own constructed masculinity with these pathetic signifiers — the over-abundant car, the tough job, and the longing to just get one lap-dance from this gang of girls he can’t seem to comfortably interact with — Tarantino and Russell subvert typical slasher movie tropes with the honesty that this villain isn’t Johnny Cash cool, but sniveling, pathetic, and blown away by the mere existence of womanhood.

Stuntman Mike functions as a disruptor of female friendship when he butts his way into the hallowed space of their conversations and hang-outs. Tarantino is famous, and rightfully so, for his ability to write long scenes of discourse, and in Death Proof‘s witches brew of muscle-car, slasher, and exploitation cinema there’s a dash of the hang-out movie — of course, where characters simply just sit and chat about whatever. The finest of these sequences are the long conversations between Jungle Julia, Arlene (Vanessa Ferlito), and Shanna (Jordan Ladd), who’d like everyone to know it’s Shanna-Banana not Shauna-Banauana, “Because there’s nothing worse than girls named Shanna being called Shauna,” in her own words. Like any real gang of women who are ride-or-die together, these girls have a language of specificity that they’ve created together through years of friendship. They rag on each other, but love one another too, to the point where there’s total openness between the three girls about everything from their sex lives to what drugs they’re using. Mike, though, is a wedge — and like all the other pathetic men in the film they try to find their way into Jungle Julia’s gang of women through sex. When Julia & her crew decide to go back to their cabin, just us girls, the men all go off on their own paths, but Mike sticks around & when they end up on the road together Mike kills these women by crashing his Death Proof car (the title is literal) head-on into Jungle Julia’s ride.

The film is split into two parts; in the second we once again meet a group of women that Stuntman Mike is stalking; but here, he failed to realize that he was about to mess with the wrong group of vixens. Shanna wears a Faster, Pussycat! Kill! Kill! tee-shirt in the first half, but it would’ve been more accurate for Zoe (Zoe Bell), Abernathy (Rosario Dawson), or Kim (Tracie Thoms) to wear. We again hang out with women as they talk about everything. They work on a movie set together (Zoe & Kim are stuntwomen in their own right) and plot their week off. Zoe and Kim want nothing more than to chase after the dream of driving the Dodge Challenger from Vanishing Point, and there just so happens to be a man selling that exact vehicle in the back-hollers of Lebanon, Tennessee, where these women are stationed. Abernathy and Lee (the naive hanger-on of the group, played by Mary Elizabeth Winstead) don’t see what the fuss is about over an old car, but it’s the car from Vanishing Point and they’re willing to indulge in their friends obsessions, because that’s what besties do. Viewing these scenes of conversation, it cannot be overstated just how important Sally Menke was to Quentin Tarantino’s work. She edits the dialogue in such a way that makes viewers feel as if they’re present, cutting between the women as the conversation swaps point of view and moves freely between one another. In the filmography up through Inglorious Basterds there was always this driving sense of communication between characters that brought out the very swagger of Tarantino’s words, and that couldn’t have been accomplished without Menke’s editing prowess. Tarantino has become over-zealous with his own dialogue in the past few years, but before Menke passed away she gave his films their very drive.

The car chase between Stuntman Mike’s black-winged angel of death and Kim’s brand-new white horse of a Dodge Challenger is one of the best things Tarantino has ever shot. He was adamant about not filming the chase with CGI, feeling there hadn’t been a single good scene of this nature since James Cameron’s Terminator 2. In Tarantino’s own words, “With CGI he couldn’t feel it in his gut.” There is something primal and muscular about the final showdown between the two vehicles. It’s a sequence that has two narrative beats split in two where Stuntman Mike is the villain chasing and attempting to murder the unsuspecting girls — in his eyes, it’s all a bit of fun — and the other is the revenge. He slams his car into theirs as Zoe Bell slides all over the hood of her dream muscle car  through the hills of a Sunny California meant to be Tennessee. During this chase, Tarantino’s cinematic universe collides with reality, and it’s something he has never tried to accomplish since. As the factory-line vehicles with no personality trail Kim and Mike on the freeway, there’s a real sense of fissure between a world he considers lost and the world in which we reside. It’s almost experimental, pushing the boundaries of what we’ve come to know in a Quentin Tarantino movie. It’s an image like animation spilling over into live-action: cinema cleaving into reality.

When Mike actually runs the girls down and corners them, he exits his car for a little bit of gloating and flirting as he screams to the girls, “That was fun. We should do it again some time,” like some sort of maniac who can only have sex with his car. Kim doesn’t take this too lightly, though, and shoots Stuntman Mike in the arm. What follows is a reversal of the previous sequence with Kim & Co. chasing Mike down as he whinges like a totally pathetic villain at his gunshot wound that barely grazed him, all while attempting to evade the girls in his now-beat-up car. He can’t quite get rid of them, and after a long climactic chase, the girls flip his car upside down. He crawls out begging for mercy but doesn’t find any. The camera follows Kim, Abernathy, and Zoe, focusing on the sway of their hips in skin-tight jeans with symbiotic motion as they approach Stuntman Mike — and, like that iconic image of Varla laying waste to men on the poster of Faster, Pussycat! Kill! Kill!, they, too, find their calling in the circular camerawork of the beatdown of this creep who uses his car for sexual gratification. In the ’70s, this scene would’ve been transgressive, an oppressive force knocked down by those he attempted to victimize, and it still carries some level of deep satisfaction today. Due to the near-constant vocal references to Vanishing Point, it would be easy to consider that Tarantino’s focal point. But this is his girl-gang movie. Chick Habit? You betcha.