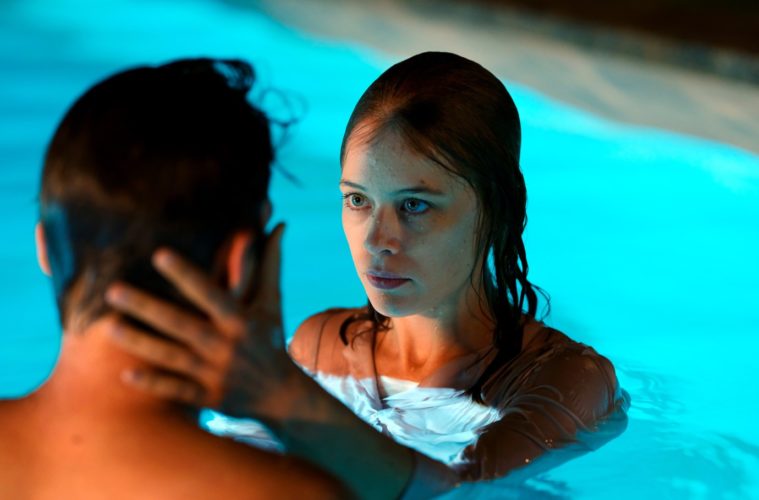 Following up a successful work of lucid experimentation like Transit can be a tricky undertaking: does one lean back toward the basics or further up the ante? Christian Petzold shoots for the latter with his latest, a Berlin-based pseudo-supernatural melodrama titled Undine. And that name should prove telling: the myth of the watery nymph that inspired as far-flung old guys as Walt Disney, Andy Warhol, Neil Jordan, and Hans Christian Andersen in their creative endeavors. Ever the intellectual, in his press notes Petzold references the female-centric version of Ingeborg Bachmann as his key inspiration and his story does prove, for the most part, to be told from the eponymous heroine’s angle.

When we first encounter Petzold’s Undine she is decidedly land-based, a historian working as a tour guide for an Urban Development project on Berlin’s famous Museum Island. The setting is immediately enticing–indeed, one of the very best things about Transit was its blatant disregard for time and setting. It was a kind of anti-period piece that took place simultaneously in both present and past. The cultural area of Museum Island, with all its gorgeous neo-Greek architecture (all built or re-built after the Second World War in an ongoing and costly process), appears immediately in keeping with that mood. The director, true to form one could argue, has other fish to fry.

An excellent Paula Beer stars as the women soon to be betrayed. Petzold opens on a café scene with Undine getting dumped by her soon-to-be ex-boyfriend, a grease ball named Johannes (Jacob Matschenz). The moment is perfectly, exquisitely Petzold: natural light; cigarettes; tinkling melancholic piano; total Europeanness; and a single, oddly aloof tear as the title card appears. The director even improves on this in the moments after, introducing a beefy rebound–a diver named Cristoph (Franz Rogowski, excellent as ever)–with a dramatic crash through an aquarium.

One of Petzold’s most enduring qualities as a filmmaker has been his unapologetic nostalgia for romantic cinema (Transit’s echoes of Casablanca were certainly not coincidental) and it’s difficult not to smile at the thought of him coming up with this meet-cute–as Christophe and Undine lie on the floor awash with water and reeds; boy picking pieces of glass from girl’s blouse. The film is at its best in such moments: playfully comic and surrealist but still hard-wired to one of cinema’s fundamental truths: when done right, it remains simply irresistible to watch beautiful people in close-up falling in love.

Beer and Rogowski do not fail to fit the bill (nor does cinematographer Hans Fromm’s ability to capture their romance). And there is so much sweetness to their shared sequences: goofing on the train station platform or under the sheets; or, better yet, the moment when Beer rises ever so slightly on her toes to meet for a kiss. Cristoph’s profession is to suit up and dive below water in order to weld pipes as he encounters passing monkfish. An invite for Undine to submerge alongside him sets the mythology in motion.

The film frankly never quite lives up to these early moments. The appearance of an iPod Mini proves a clue to the slightly older period we are in and Petzold’s shift into the real present-day Berlin seems to sober the film up too much: the urban development tours now feature talk of rent-caps and housing shortages; we also encounter a couple of ex-pats in a short-term leased flat. (Again, Petzold returns to this macro socio-economic thread but leaves it curiously under-explored.)

The filmmaker has never been one too concerned with loose ends–if anything he has more often sought to pour cold water on our romantic expectations. In taking a centuries-old piece of mythology as its source material, Undine ultimately forgoes the inventiveness and sensuality of its first half by slipping into relatively bland predictability. And for a filmmaker who thrives on disregarding narrative conventions, it feels a fatal error. “Relatively” is the key here. This is still Petzold after all, if not peak Petzold.