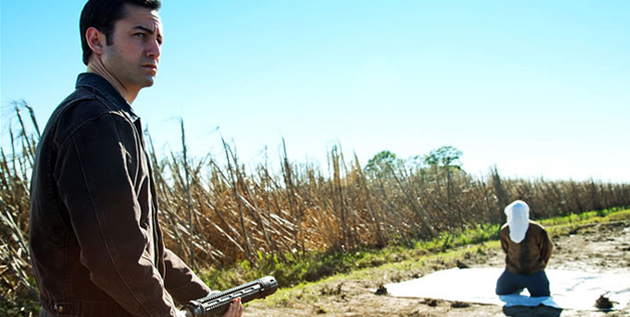 10 Films To See In September This month marks one of the most exciting times of the year for a film fan, as studios are finally beginning to show off their most promising movies of the year, either in theaters or on the festival circuit. We will be bringing extensive coverage of TIFF later in the month, but with the theatrical offerings (some from the aforementioned festival and many from Sundance), filmgoers have much to look forward to. I opted not to include re-releases of Finding Nemo and Raiders of the Lost Ark in order to highlight others that you can check out below.

Synopsis: A writer at the peak of his literary success discovers the steep price he must pay for stealing another man’s work.

Why You Should See It: As Bradley Cooper heads into more serious work with Silver Linings Playbook and The Place Beyond the Pines both on the festival circuit this month, a little warm-up that premiered at Sundance arrives in theaters this week. I found The Words to be a bit dramatically inert due to its structure, but it’s worth seeing for fine performances for Jeremy Irons, Zoe Saldana, Dennis Quaid, Olivia Wilde, J.K. Simmons and more.

Synopsis: Two young officers are marked for death after confiscating a small cache of money and firearms from the members of a notorious cartel, during a routine traffic stop.

Why You Should See It: David Ayer has yet to helm a cop drama that rises above cliches, and while I can’t help but thinking End of Watch falls into the same category, there is a surprising amount of buzz for this one. I’ve talked with a few people who have raved about the two lead performances and even say the handheld style works. Perhaps this TIFF premiere will be a major surprise this fall.

8. The Perks of Being a Wallflower (Stephen Chbosky; Sept. 21st)

Synopsis: An introverted freshman is taken under the wings of two seniors who welcome him to the real world.

Why You Should See It: In a rare occurrence, author Stephen Chbosky went ahead and not only adapted his own book but got behind the camera as director for The Perks of Being a Wallflower. Set to premiere at TIFF, the major draw in this coming-of-age tale for yours truly is Ezra Miller, stepping out from dark roles in films like We Need To Talk About Kevin and Afterschool. Also starring Emma Watson, Logan Ler­man, Mae Whitman, Paul Rudd, Johnny Simmons and Dylan McDermott, hopefully this one captures a specific time in adolescence with authenticity.

Synopsis: An ailing baseball scout in his twilight years takes his daughter along for one last recruiting trip.

Why You Should See It: Clint Eastwood returns in front of the camera for what looks to be a relatively light, enjoyable time out on the baseball field. Amidst a season of awards-focused heavy hitters, I’m looking forward to a simple, well-told story. First-time director Lorenz looks to deliver with a cast that also includes Amy Adams, John Goodman and Justin Timberlake.

Synopsis: When thirty-something Jesse returns home for his old professor’s retirement party, he falls for Zibby, a college student, and is faced with the powerful attraction that springs up between them.

Why You Should See It: For his sophomore feature, How I Met Your Mother star Radnor steps it up in a major way after his trivial, poorly-written debut Happythankyoumoreplease. Dropping the false nature of his previous effort, Liberal Arts adds a wonderful cast that includes Elizabeth Olsen, Richard Jenkins, Allison Janney and a hilarious cameo performance from Zac Efron. It’s funny, charming and well worth your time.

Synopsis: A troubled hedge fund magnate desperate to complete the sale of his trading empire makes an error that forces him to turn to an unlikely person for help.

Why You Should See It: Nicholas Jarecki has delivered one of the finest feature narrative debuts of the year with his tense thriller Arbitrage. Not only is it great to see Richard Gere back in a role meant for him, he’s joined by up-and-coming stars Brit Marling and Nate Parker, both showing off why they deserve to be in the spotlight. One can check it out on the same day on VOD as well.

Synopsis: Three friends are asked to be bridesmaids at a wedding of a woman they used to ridicule back in high school.

Why You Should See It: Wickedly funny and surprisingly dark, Leslye Headland‘s indie dramedy debut is a R-rated good time that tackles sincere issues many films in the genre gloss over or barely recognize at all. Many will compare it to Bridesmaids, not helped by the fact it also stars Rebel Wilson, but Kirsten Dunst, Isla Fisher, Lizzy Caplan, James Marsden and Adam Scott come together for this snappy, hilarious look at growing up and much more.

Synopsis: The story of two coalitions — ACT UP and TAG (Treatment Action Group) — whose activism and innovation turned AIDS from a death sentence into a manageable condition.

Why You Should See It: Not too long ago the mix of stigmatism and general unawareness of HIV/AIDS led to little government involvement, but change finally came thanks to a fearless group people. Premiering at Sundance to strong reviews, David France‘s How To Survive a Plague chronicles this uprising and looks to do exceptional justice to such a vital time in our very recent history.

Synopsis: In 2072, when the mob wants to get rid of someone, the target is sent 30 years into the past, where a hired gun awaits. Someone like Joe, who one day learns the mob wants to ‘close the loop’ by transporting back Joe’s future self.

Why You Should See It: With his first two features (Brick and The Brothers Bloom), Rian Johnson has established himself as an inventive filmmaker who is on the verge of making a masterpiece. If the buzz rings true, his first foray into science-fiction with Looper could very well be a major next step. Certainly his biggest film yet, the Joseph Gordon-Levitt and Bruce Willis-starring feature marks that rare, promising occasion that both a Hollywood film and an art film has opened the Toronto International Film Festival.

Synopsis: A Naval veteran arrives home from war unsettled and uncertain of his future – until he is tantalized by The Cause and its charismatic leader.

Why You Should See It: Usually we would have to wait deep into the fall for my most-anticipated film of the year, but thankfully it’s coming early. We can already confirm that Paul Thomas Anderson‘s There Will Be Blood follow-up is excellent, but that will likely be only the beginning of the discussion when it comes to this elusive drama. As it expands in the coming weeks, check your local theaters and make sure you see this one in 70mm if possible.

What are you looking forward to this month?