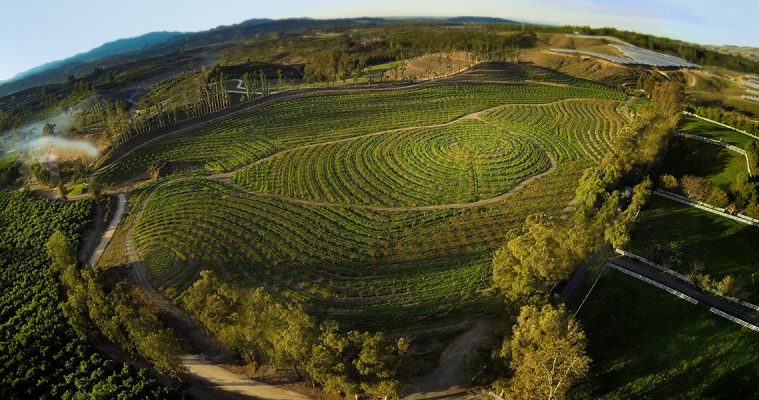 After getting evicted from their apartment in Los Angeles due to taking in a stray dog, filmmaker John Chester and food writer Molly Chester decide to try and cultivate a storybook farm in The Biggest Little Farm. The latest entry into the canon of films exploring food and ecosystems, like Aube Giroux’s Modified and Andrew Grace’s Eating Alabama, the documentary works as well as it does because of a reliance on its relatable subject and the director as its narrator.

Uprooting their dog to a two-hundred-acre swath of land in Moorpark, California that is in need of biodiversity, the couple turns to a local expert named Alan who has plans for them to succeed where others have failed. The film is more interested in the ecosystem than the economics of farming as their new home welcomes in chickens (and later a very successful egg operation), ducks, bees, and a pregnant pig, who inspires much of the drama as she becomes unresponsive upon giving birth. Nature also creates all kinds of moral dilemmas when it comes to the cycle of life: predator and prey keep infiltrating as Chester struggles with the most humane way of dealing with the coyote attacking his chickens. First, he installs electric fencing, before moving to more drastic measures.

Chester finds drama (and joy) in the daily workings of the commercial farm as they transform barren lands into an oasis through the implementation of modern farming systems, including irrigation and impressive composting facilities. There are cute animals and stunning bits of violence–nature doesn’t always equal harmony as the Chesters soon find out when they transform Apricot Lane Farms into a profitable business in the course of the film’s eight-year journey. The documentary mixes rough and ready footage with beauty shots (lensed by a mix of interns, farm hands, and professionals)  and a diary entry-like voice-over structure.

The Biggest Little Farm proves to be a gripping documentary borrowing from the Fredrick Wiseman ethos that interesting characters are everywhere. Here, they are the animals mostly, alongside John, Molly, and their son, who arrives later in what’s largely a personal philosophical quest. While a cynic could dismiss the film as branded content for Apricot Lane Farms, the film isn’t making a sales pitch for their products. Rather, it’s a captivating personal journey with a concern for harmony and a gentle sense of humor.

The Biggest Little Farm premiered at the Toronto International Film Festival and opens on May 10.