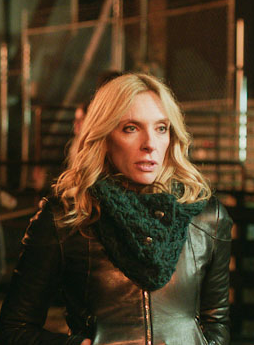 Starring Toni Collette and directed by Megan Griffiths, Lucky Them is a strong character study centered around a Seattle rarely seen on film: infused with the history of indie rock and the dream of the 90’s. In fact, Collette’s Ellie Klug is still living the dream of the 90’s, working as a senior writer at Stax Magazine, a 20-year old publication led by Oliver Platt. Dealing with a corporate structure and electronic distribution, Platt’s pot smoking editor-in-chief is annoyed he has to attend shareholder meetings and add a life style section to his magazine. Ellie spends her time seeking out, interviewing and subsequently bedding aspiring artists, ultimately falling for a younger singer-songwriter Lucas Stone (Ryan Eggold). Sent off out of her comfort zone, the rock critic is forced into investigative journalism, researching her former lover, Matthew Smith, an influential alt rocker that disappeared one night after a gig. Teaming up with Charlie (Thomas Haden Church), a dot-com millionaire (the dream of the 90s!) who passes the time by taking classes in documentary filmmaking at a community college, they set off to seek out and make a documentary about Smith.

Smart, funny and emotionally complex, Lucky Them has a good deal more going on than this description suggests. Like the characters in another excellent Pacific Northwest comedy about journalists, Safety Not Guaranteed, self-discoveries are made along the way. Ellie is not an easy character to like, or even love — far from the manic pixie dream girl, she’s a whisky-drinking, one-night stand-having women who is comfortable in this life style. She’s not on the verge of self-destruction because she’s been at it for so long and has made a career and lifestyle of it.

Griffiths and cinematographer Ben Kutchins photograph the Seattle and the Pacific Northwest beautifully, infusing the visual style with a crisp mist and strong sense of place. The road trip material is great, even if it looses its bearings as Charlie rushes into a marriage with a woman he’s just met (played by Ahna O’Reilly) which perhaps adds another layer of sadness to Charlie. He’s a flawed, flesh and blood character with the look of a sophisticated college professor, but once you get to know him he’s quite a man-child (as only Thomas Haden Church can play him). Lucky Them is an emotionally satisfying journey, subverting expectations of the charming road movie. The film is full of surprises along the way including detours that don’t always work for the movie (and characters). Still, this is a rare, mature look at indie rock culture from a filmmaker who elevates this material with the culture it deserves (without the presence of many inside jokes). Griffiths’ touch is not as subtle as it ought to be at times, yet this story (written by Emily Wachtel and Huck Botko) knows this emotional territory well, making for the stuff of great indie rock albums; and yes, the soundtrack full of local music is wonderful as well.

Lucky Them premiered at TIFF. One can see our complete coverage by clicking below.