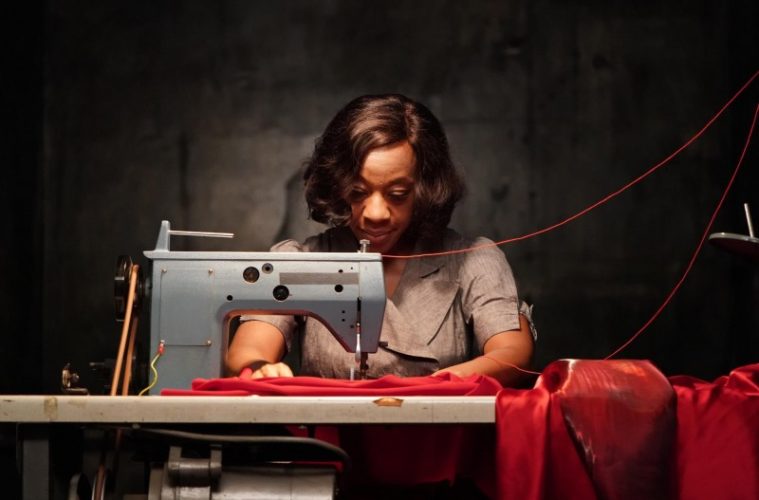 TIFF Review: ‘In Fabric’ is Brazenly Weird and Wholly Retro

In Fabric is a film that’s wholly retro, and not just in how writer/director (and emerging remix artist) Peter Strickland embraces ’70s Euro-horror tropes (and even judging by one commercial glimpsed on a television; a little bit of vaporwave). Rather, the director longs for a time before Amazon decimated the retail industry, one when a person’s hopes and desires hinged on a trip to that one certain shop.

The film begins with a single mother (Marianne Jean-Baptiste) putting out a lonely hearts ad in the newspaper, desperately needing a distraction from her ungrateful teenage son and comically micro-managing superiors at work. Looking to find the right dress for a blind date, she finds herself in a shop seemingly run by a clan of witches and one old creep; a certain red number on sale catching her eye. Though from there, it only brings her trouble; ranging from mysteriously violent encounters with both machinery and animals to extreme nightmares. Frequent interactions with head witch Miss Luckmoore (Fatman Mohamed, a total hoot who plays the character more like a Simpsons guest star than an actual villain) only add to the spiraling descent into unimaginable terror.

It should be said that considering her relatively limited amount of screen time, the interior life of Sheila feels exceptionally fleshed out, which will maybe suggest “elevated horror” labels to be thrown the film’s way. Divided in into two tales, it’s a little unfortunate that the first story is a tad too short to not register as just a little mean-spirited. As not to get too moral on a genre enjoyed for transgression, one would still think seeing worse people get their comeuppance, like say Tales From the Crypt’s entire du jour, would maybe be a tad more appropriate.

This mean streak is a little more apparent in the second half, revolving around the dress coming into the possession of two working class dullards, Reg (Leo Bill) and Babs (Hayley Squires). This entire thread (groan) maybe puts the film in the kind of territory that certain people still like to give the Coen brothers grief for. A particularly awkward (and yes, admittedly funny) sex scene between the two brought to mind a certain Dave Kehr quote regarding Fargo about everything being “calculated to make the viewer feel superior” to the characters.

Initially, the second half seems to have something more interesting on its mind, promising to veer into some unexpected territory regarding gender norms. After all, what puts things into motion is Leo buying the dress to put on at a bachelor party thrown by his boorish male friends. The film seems to be approaching an interesting complementary side to the first half’s depiction of middle-aged female loneliness, but at the end of the day, Strickland’s form is what the film is all about.

It’s easy to admire Strickland’s formal chops while still finding the film–or rather his throwback “flourishes”–a little conceited. Similarly, one is impressed by his brazen weirdness, while still finding that In Fabric can never totally succumb to total dream logic a la Dario Argento or Jess Franco. After all, one never wants surrealism to feel calculated. Though maybe the occasional glimpses of strong domestic drama shows promise of an artist who can one day match form and content.

In Fabric screened at the Toronto International Film Festival and opens on December 6, 2019.