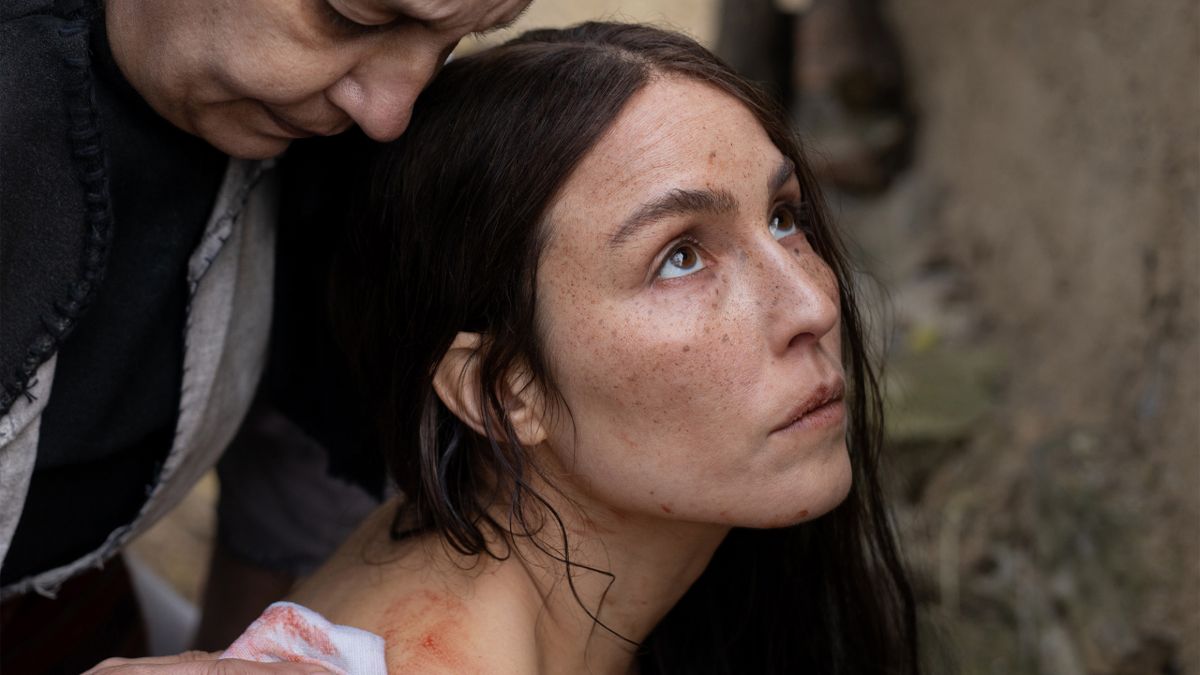 In 19th-century Macedonia a desperate mother makes a deal with a witch. Rather than allow her only child to be taken from her immediately, the woman promises her baby at age 16 to the mythical Old Maid Maria (Anamaria Marinca), whose unwelcome arrival hovering over the innocent might indicate a desire for blood. But the mother ineffectively attempts to fool the witch. After this scarred, centuries-old being agrees to the terms and leaves her mark by ripping out the infant’s tongue, the woman feigns that her child has already been seized by the dubbed “Wolf-Eateress” and hides her away in a cave for the ensuing years. With only a small circle of blue sky peeking in through the top of the cavern to the depths below—her only connection to the outside world being frenzied food deliveries from her mother—the child grows up feral, unmoored to the society that exists just above her.

But when the Wolf-Eateress returns to claim her promised prize she does not kill her. We learn later in Australian-Macedonian writer-director Goran Stolevski’s arresting feature debut, You Won’t Be Alone, that before she descended into a very real legend, Maria was a woman who yearned for a child of her own. Instead of killing the untamed Nevena (Sara Klimoska) Maria offers up her once-in-a-lifetime “witch’s spit” to this successor, transferring her shape-shifting abilities and blackened talons over to the confused yet endlessly curious girl. Suddenly the child, now a teenager, is not kidnapped but liberated. Guiding Nevena through a natural world that is foreign to her, Maria begins teaching her not only how to be a witch, but how to be a human being. Nevena works through her complicated thoughts on her ceaselessly evolving new life in a quasi-whispered voiceover, the film’s principal dialogue. As she was robbed of her speech as a baby, Nevena’s naturally untidy understanding of language renders her internal monologue in a form of tangled riddles.

It’s easy—and so has been done to death this early into the film’s life—to compare Stolevski’s film to someone like Terrence Malick. But the influence is unmistakable. From the hushed voiceover to the textured cinematography of awe-inspiring, rolling Macedonian landscapes from DP Matthew Chuang, the Malickian impact is at once stunning and derivative. Nothing about how Stolevski plays with the pastoral influence is particularly inventive. You Won’t Be Alone instead feels like the end product of Malick himself trying his hand at arthouse horror rather than Stolevski truly crafting something new and entirely his own. The best, most singular pieces—the study of gender, mortality, personhood, and sexuality; the folk horror—are impeded by stylistic choices ensconcing an otherwise fascinating narrative and thematic exploration.

Nevena eventually disavows her “witch-mama” like any unruly teenager might do their parent, determined to make her own way in the world. She wanders into the bodies of unlucky new hosts, killing them in the process. She becomes a farmer’s wife (played by Noomi Rapace), where she learns about the preciousness of female camaraderie as a safe space from patriarchal systems of oppression. (“To the woman you are glass, to the man you are water,” she ruminates.)  Throughout the rest of the film, Nevena transforms into a revolving door of different bodies—once even becoming a dog, then a man. Since she does not subsume the consciousness that once inhabited her bodies, like an inquisitive child Nevena relearns, every time, how to exist as a person, indulging in the pleasures and pains of each new form. It’s a fascinating and deeply compassionate take on gender-fluidity, a subtext that is obvious from the start and increasingly transparent as the film carries on. (“Think they see you as one of them?” Maria chides Nevena, popping back into her life every so often to try convincing her that the humans around her aren’t fooled by her “disguise.”) You Won’t Be Alone is not about who Nevena once was, but who she is becoming.

So it’s somewhat unfortunate that what makes You Won’t Be Alone such a spellbinding, impressive film is held back by, well, everything else. Something like the unhurried pacing of its 108-minute runtime would feel less daunting if all else, in turn, felt less familiar. There is probably an alternate universe where You Won’t Be Alone is the first of its kind, rendering it nothing short of a revelation. Instead Stolevski does not seem interested enough in truly setting his work apart from the work that preceded it. Wearing influences heavily on its sleeve, this is a gorgeous, empathetic feature debut too reliant on what has paved the way for its existence.

You Won’t Be Alone premiered at the 2022 Sundance Film Festival and will be released on April 1.