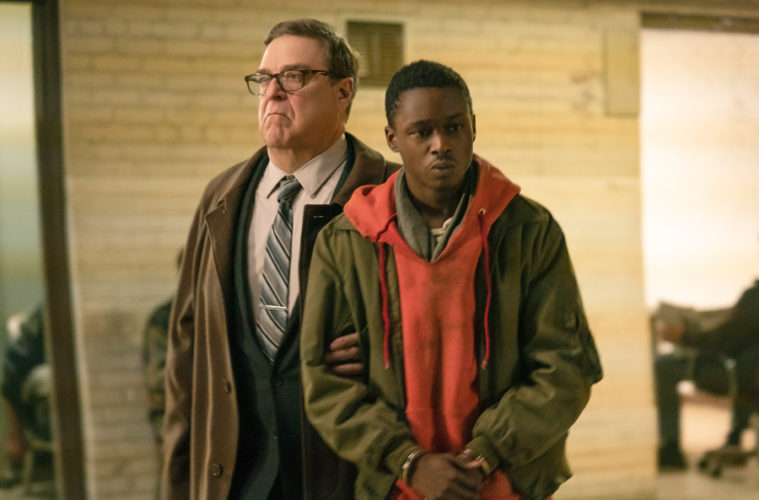 Rupert Wyatt on Crafting a Realistic Alien Invasion, Jean-Pierre Melville, and ‘The Battle of Algiers’

Captive State could very well be set in an alternate timeline of Arrival, one where the communication tactics of Louise Banks (Amy Adams) failed and the aliens stayed put to govern over humans. While this has happened worldwide, Rupert Wyatt’s grounded new sci-fi thriller specifically hones in on Chicago, where top government officials work with the alien forces in hopes of eventually getting off the “dying rock” that is Earth. Meanwhile, nearly-eradicated factions of the resistance aim to hold on to a semblance of hope that humanity will prevail as they fight back.

We spoke with the director–who broke out in Hollywood with another sci-fi film, Rise of the Planet of the Apes–about crafting this sci-fi world, being influenced by Jean-Pierre Melville and  Gillo Pontecorvo, how the film looks at timely issues, some ingenious casting, the film’s unusual structure, and more.

The world-building in this film is impressive. I was wondering what your initial ideas were and if you had a Bible of sorts to keep track of all the characters and storylines that you could reference?

Yeah, like any form of science fiction it really good to figure out the logics of the world and the backstory and sort of build those foundations upon the emotional and human narrative, which should be the priority of course. So, for sure I definitely conceived how the invasion happens, when it happens, the intentions and ulterior motives. I sort of followed recent history–20th century history–in terms of the Nazi and the terms of armistice and the very quick capitulation to form a collaborative government–so all of that was rolled into the backstory and then I made choices for how much of that we were then going to actually put into the real kind of storytelling.

I heard you were inspired by the films of Jean-Pierre Melville, specifically Army of Shadows, and Gillo Pontecorvo’s The Battle of Algiers. Can you talk about those influences?

Yeah, they are really formative films for me. I love them. They are different breeds. I think The Battle of Algiers is a more emotive film than Army of Shadows. Army of Shadows is dry and deft in many ways, but it has this emotional impact at the end. It’s similar in the sort of hybrid narrative nature I was trying to do in Captive State insofar that I was following many characters. We’re really following them in a kind of real-time way so we had many opportunities to sit with them and reflect upon situations they found themselves in or decisions they had to make. So what’s challenging about that is it’s because you can really empathize with the character and get under the skin of a character in an emotive way. You don’t have your traditional backstory. You don’t have the high dramatic stakes of emotion.

But what it can do, which I hope I’ve achieved in this film–and I think Army of Shadows does this–by the end once you see the full jigsaw puzzle in front of you, it has a real emotional weight to it because you understand the full picture and the spider’s web that has been created as it was. Battle of Algiers is a really key influence because it’s a film that really analyzes and investigates this idea of occupation. He tells the story from both sides in a very impartial way. You really empathize with the French occupiers through the general character and then of course you really get under the skin of those occupied and you understand their trials and tribulations as well. To me, it was a pretty even-handed way to study what it means to be an occupier versus someone under the hands of occupation.

Speaking more to that, there’s a lot of parallels to today’s world. There’s this totalitarian rule. You can imagine this could be our future in nine years, perhaps without the aliens. There’s extreme government surveillance, wiretapping, a wall, detainment, and more issues. Can you talk about playing those issues up without being too on-the-nose?

Yeah, it’s interesting because the issue of being on-the-nose is somewhat out of our hands because we actually wrote it before many of these conversations sort of came into the White House. I’m pleased in some ways that the view reflects some of the discussions that are happening. It was never our intention to make it polemic. We didn’t want to make it an overtly political film. I’m no liberal or am I the right-wing. As a storyteller, my intentions are to tell a human story. What I would say is that the most political aspect of this film for me and just how it relates to today–in what I would believe is an important way–is how we let capitalism and the economic interests of a select few of the big businesses to put those priorities ahead of our environmental needs and what is happening to our planet as a whole. I think there has to be a sea change in the coming years in terms of how we are governed in that way in order to really do right by this climate and ultimately by ourselves.

There’s some ingenious casting here, with Ashton Sanders and KiKi Layne sharing a scene. Was that a nod to their work with Barry Jenkins or unintentional?

No, funny enough we shot this before Ashton went off to do Native Son and KiKi went off to do Beale Street. I actually remember we were on set when KiKi heard she had been cast in that. I think we had just wrapped. Funny enough, they knew each other. They had both been in drama school together. Again, that was a coincidence. I had no idea. When I first cast Ashton, he had came into an audition and I had not seen Moonlight. I had seen another, very early film of his and thought he was interesting. He came in and Sheila Jaffe, my casting director, who is someone I love to work. She has an amazing eye for finding the right actor for the role and really helped me populate this ensemble. She was a huge champion of his and he has a very old soul, Ashton. He’s very still for somebody so young and that’s exactly what I was looking for. And then I went away and watched Moonlight and saw what he was capable of. Yeah, it’s a funny fact that Barry Jenkins world is there. [Laughs.]

I thought it was an interesting structure, how you follow Ashton’s character then get into this almost 40-minute sequence of this plan other characters are trying to pull off. Can you talk about that structure you envisioned?

Yeah, to be honest it’s my favorite section of the film. It’s a challenging and exciting task to try and create a hybrid narrative. Many people’s idea of a film–especially a genre film like this–could be telling the hero’s journey story and that would be Ashton. So then to leave him in this incapacitated state for 20 or 25 minutes as one goes off and explores something else. Maybe it didn’t quite explicitly land, I don’t know. You can be the judge of this, but when I was in the edit, I was really trying to make it clear that the action of what happened in the stadium actually lead to the freeing of Ashton in his prison state in the subway, without giving too much way. I wanted to try and relate to the cause and effect nature of the storylines going on.

But yeah, I loved this idea that we pick up and green light this cell–this group of militants that are hiding in plain sight from everyday walks of life and really disparate characters. There’s an ex-Catholic priest because his religion has been banned. There’s a member of the trans community who is in this marginalized state. A group of people who have been forced to go underground because their views are opposed. A female auto-worker who is a great driver. Really trying to color them in in very brief opportunities in terms of how we find them. In a way, you kind of get to empathize with them more and relate to them by the very nature of how they then bounce off each other. It’s a heist movie in a way, putting together a group of criminals and how they interact. I found that really interesting. It’s also part of the film that has very little dialogue so the storytelling is intended to be purely visual and we get to know them through their actions. I love that kind of storytelling. It’s something I’ve tried to do in the past and I think it’s a lot of fun.

There’s all these little details in the film: invisible bombs and tracking devices implanted in necks. What was it like coming up with these things that are one step out of reality but still have this grounded sci-fi aspect?

It’s an interesting thing because those alien tech aspects might be normally seen in a world that’s a little more heightened. We went with the kitchen sink approach to the sci-fi. So everything had to be grounded, a natural feeling. The dressing of the apartment is very contemporary. So to then put these aspects of sci-fi tech or alien tech into the world, it can be quite jarring. I quite liked that. I thought it was so extraordinary. The way they are handling it and using it is so tangible and grounded. It was really my intention to tell the story as if looking through the window of our home and what we see outside the window is how the film then plays out. It’s low-tech sci-fi and I like that. It’s very analog.