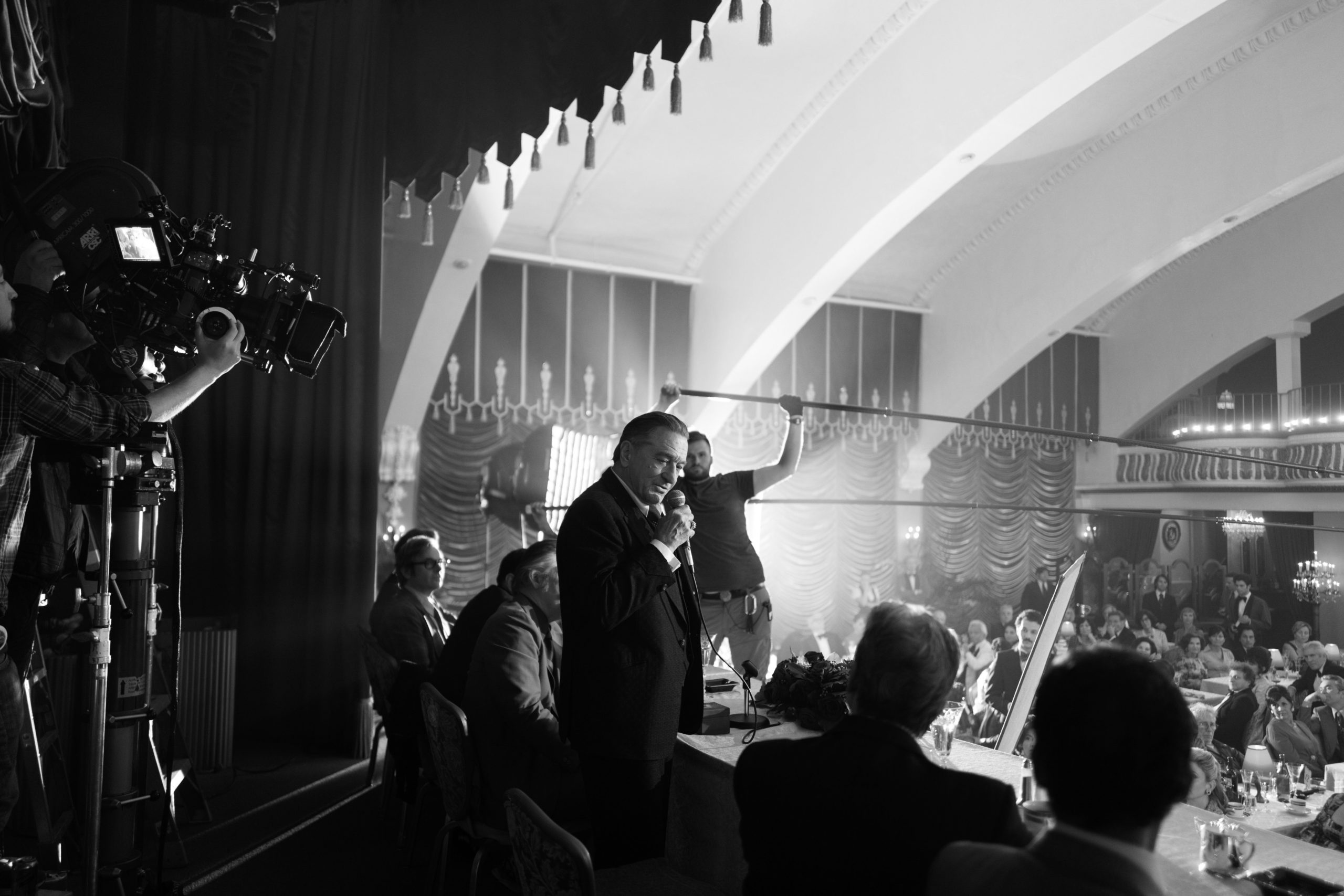 The end of the year and the start of the next often brings about a flood of books about cinema–many of them timed to tie in with the Oscars. This column features a few of those, a bit of Star Wars, some classic Hollywood talk, weighty biographies, and more. Let’s start with Marty and company.

The Irishman: The Making of the Movie by Tom Shone (Assouline)

Martin Scorsese’s The Irishman may not have had the awards season impact many predicted, but it was still something of a cultural sensation. It was also one of the director’s late-period greats. If you enjoyed the film—and don’t mind spending $175—The Irishman: The Making of the Movie is well worth picking up. Full of insightful interviews and stories, author Tom Shone’s text also serves to highlight the film’s wondrous costumes and production design. It’s a beautiful and surprisingly intimate appreciation for a cinematic masterpiece. My favorite quote comes from producer Jane Rosenthal: “Bob felt that his next collaboration with Marty, whatever it was going to be, had to be very special, and it’s hard for anyone outside of the two of them to define what that ‘special’ is.”

It is quite fitting to read Stephen Tapert’s nearly 500-page history of Best Actress Academy Award winners during Oscar season, of course. But it’s a book to be read and enjoyed any time, really. While we all know the details of the careers of recent winners like Brie Larson and Frances McDormand, Tapert spends just as much time on legendary figures like Norma Shearer and Marie Dressler. The chapter about Shearer’s tragic life is especially moving.

What constitutes “truth” is, well, open for debate. In Screening Reality: How Documentary Filmmakers Reimagined America, author Jon Wilkman investigates how documentary film has changed the American conception of truth, and the country itself. This is a major release, and a necessary one. In the epilogue, Wilkman looks at the effects of virtual reality on nonfiction cinema–but also highlights the great Dawson City: Frozen Time. It’s a sign of the book’s applause-worthy range.

It’s been 45 years since Roman Polanski’s Chinatown opened in theaters, and time has not diminished its dark power. Sam Wasson’s The Big Goodbye, a stunning account of the film’s creation and aftermath, finds that this darkness was not limited to the screen. This, of course, is no surprise for anyone who has followed the haunted life of Polanski. But Wasson finds crucial new ground to cover, about both the director and his Chinatown collaborators–Jack Nicholson, the late Robert Evans, and, especially, writer Robert Towne. The Big Goodbye plays out like a tragedy, culminating in the stops and starts of doomed Chinatown sequel The Two Jakes. All told, Goodbye is an essential read, and likely to go down as one of 2020’s best books on film.

Two Rise of Skywalker deep dives, and a droid’s life

Photo-heavy “visual dictionaries” are often a nice accompaniment to a film, but rarely make news on their own. However, Star Wars: The Rise of Skywalker — The Visual Dictionary (DK), by Lucasfilm’s Pablo Hidalgo, did make some headlines. There are key elements of the Rise story hinted at onscreen, but confirmed in the book. Examples: Mustafar being the location of Kylo Ren’s film-opening rampage, details about the Sith cultists on Exegol, and a mention of Lando Calrissian’s “vanished” infant daughter. The entire book, like all of Hidalgo’s DK texts, is a colorful, info-packed joy.

Another DK release, Star Wars: The Rise of Skywalker — The Galactic Guide by Matt Jones, is for young readers. But it, too, features some surprising details. And Anthony Daniels’ long-awaited memoir, I am C-3PO (DK), is an essential read for Star Wars fans. Taking the reader from A New Hope through Rise, it is full of admirable candor and great humor. His memories of the filming of Rise, right down to his final day in See-Threepio gold, are genuinely affecting.

Explorations of cinema legends from University Press of Mississippi

The University Press of Mississippi continually publishes fascinating studies of Hollywood legends. Two recent examples are The Lost World of DeMille by John Kobal and The Brothers Mankiewicz: Hope, Heartbreak, and Hollywood Classics by Sydney Ladensohn Stern. The former was the final book written by the late Kobal before his death in 1991, and has finally received a release nearly three decades later. It’s an exhaustively researched look at a filmmaker who pushed the boundaries of cinema but was also, according to Yul Brynner, a “very lonely man.” The Brothers Mankiewicz is a study of Herman J. and Joseph L. Mankiewicz, who, like DeMille, were complex, conflicted men. It should come as no surprise that the chapter on Herman’s work with Orson Welles on Citizen Kane is positively riveting.

Two more examples of recent noteworthy University Press of Mississippi offerings are Charles Burnett: Interviews (edited by Robert E. Kapsis) and Wes Craven: Interviews (edited by Shannon Blake Skelton). Both feature fascinating interviews from the directors’ lengthy careers. The late Craven’s defeated comments on forgotten 2005 werewolf thriller Cursed are sadly fascinating (“I can’t win at this point,” he says of battles with Dimension’s Bob Weinstein), while Burnett’s various accounts of the making of Killer of Sheep are deeply impactful. “I wanted it to feel like I’d just taken a camera into the community and recorded what happened,” he explained in 2008.

There has been a dire need for a career-spanning biography of the late Mike Nichols for a number of years. Finally, we have Life Isn’t Everything: Mike Nichols as Remembered by 150 of His Closest Friends (Henry Holt), a tremendous collection of memories compiled by authors Ash Carter and Sam Kashner. It covers all of the necessary ground, from Nichols and May to The Graduate to Angels in America. It’s also full of juicy stories about everything from Orson Welles’ bullying on the set of Catch-22 to Melanie Griffith’s drug use during the making of Working Girl.

Sidney Lumet: A Life (St. Martin’s Press), by Maura Spiegel, is a more straightforward affair, but a similarly important one. Like Nichols, Lumet’s career was startlingly diverse; A Life is a reminder of that incredible versatility.

Infinitely more somber is The Contender: The Story of Marlon Brando (Harper) by William J. Mann. This weighty (more than 600 pages) book plays out like a tragedy. Indeed, while the stories of Brando’s work are fascinating, what lingers most is the sadness and drama of his life. The final stretch is drenched in sorrow.

Meanwhile, the memoir A Long Time Ago, In a Cutting Room Far, Far Away (Chicago Review Press) by Oscar-winning editor Paul Hirsch is a lighter look at the ups and downs of a career in cinema. It’s a series of vignettes, really, touching on the many films on which he worked, from Star Wars and Empire Strikes Back to multiple films by Brian De Palma and John Hughes. Written with humor and self-deprecation, it’s entertaining from start to finish and affirms that Tom Cruise is one of Hollywood’s most generous guys, and De Palma one of its funniest.

The most frightening novel I’ve read in some time≠and certainly one of the most cinematic–is The Devil Aspect (Anchor Books) by Craig Russell. This gothic serial killer thriller, set in a 1930s Czechoslovakian insane asylum, is a chilling treat for fans of novels like The Alienist. The film rights have already been scooped up, so jump on this one now…

Three of this month’s most enjoyably illustrated books are Movies (and Other Things) (Twelve) by Shea Serrano, Spider-Man: From Amazing to Spectacular (Insight Comics) by Matt Singer, and The World of the Dark Crystal (Insight Editions) by J.J. Llewellyn. Serrano’s “collection of questions asked, answered, illustrated” includes queries like “Who’s in the Regina George circle of friends?” and “Did the Rockford Peaches make the right decision trading Kit?” The humorous text is accompanied by memorable artwork from Arturo Torres. Also memorable is pretty much every word written by ScreenCrush editor Matt Singer. He was the perfect choice to write Spider-Man: From Amazing to Spectacular, a romp through more than 50 years of Spidey comics. Lastly, The World of the Dark Crystal is back in print, giving a new generation of fans of Jim Henson’s creations to experience the concept art of Brian Froud. There is staggering beauty to be found here.

For kids (and aspiring artists)

While Stan Lee’s Master Class (Watson-Guptill) is not exactly for kids, it’s certainly something teenagers who aspire to be artists or designers will appreciate. It features design and storytelling tips all in Lee’s inimitable voice, and highlights his own creations and the work of others (including Will Eisner and Alan Moore).

DK’s Disney Princesses: The Essential Guide, by Victoria Saxon, is a simple, colorful compendium for younger readers; my 5-year-old daughter adores the book. And the latest in Random House’s Dungeons & Dragons Young Adventurer’s Guides series, Dungeons & Tombs (by Jim Zub, Stacy King and Andrew Wheeler), is a neat breakdown for the youngest D&D fanatics. Vampire castles? Islands of dinosaurs? Yeah, 10-year-old me is excited. OK, 39-year-old me is also excited.

With the success of Knives Out, Rian Johnson more than proved that his time in the Star Wars galaxy has not diminished his ability to handle more intimate fare. Johnson’s talent for writing and directing darkly humorous fare can be traced back to his debut, 2005’s Brick. Kino Lorber recently released the film on Blu-ray, and the high school detective movie is as razor-sharp as ever. It also features (arguably) Joseph Gordon-Levitt’s best performance and an unforgettable turn from Lukas Haas. Guess what? Brick is even better than you remember.