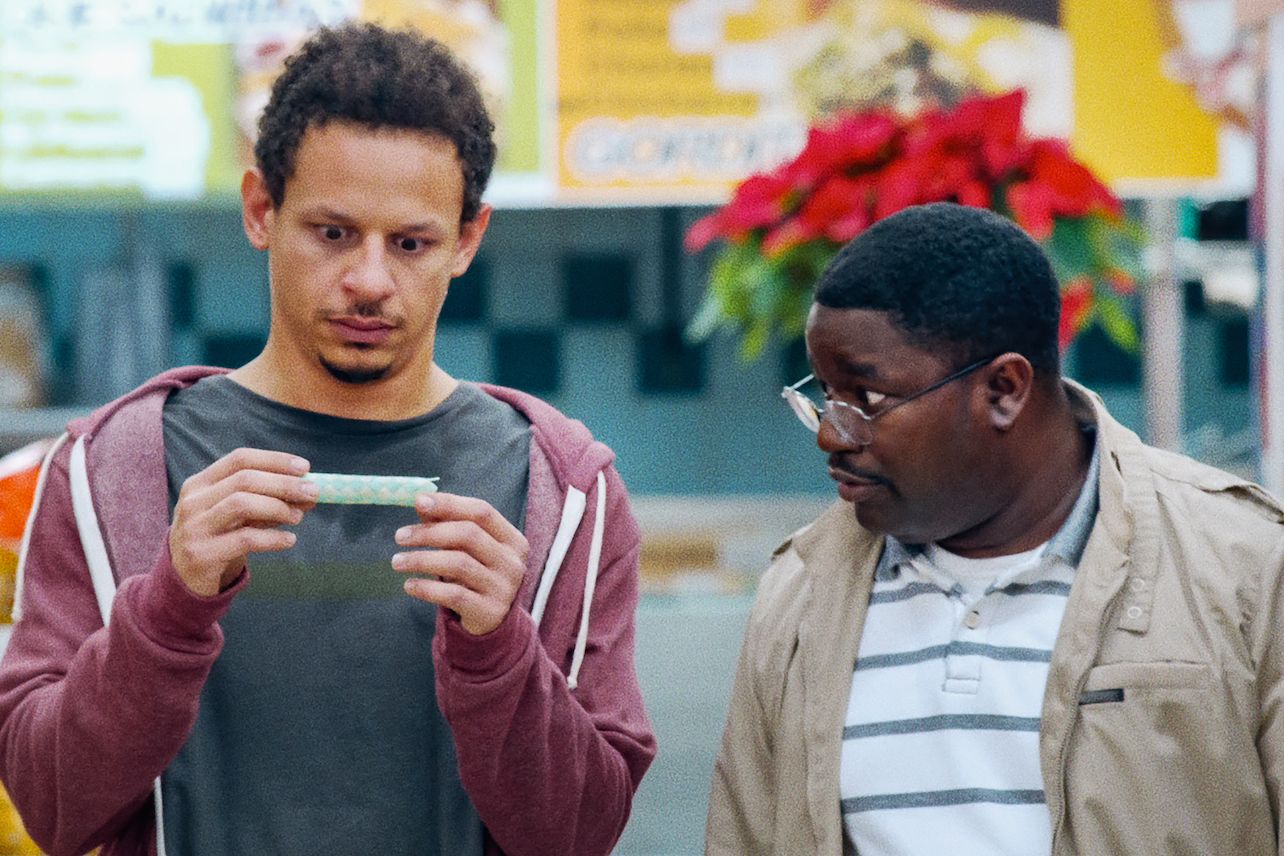 The Eric Andre persona is best understood by his popular late-night Adult Swim series, succinctly titled The Eric Andre Show. In every episode Andre’s irreverent and self-destructive behavior leads him to trash his set, causing bodily harm, and torturing a slew of celebrities that range from Jimmy Kimmel to the Real Housewives of Atlanta. Andre is the equivalent of a magic mushrooms trip: wildly confusing, incoherent, sometimes causing one to burst at the seams with ecstatic comedic moments. Andre’s energy finds the perfect vessel in Bad Trip, his first starring role with a script he wrote with frequent collaborator and director Kitao Sakurai.

Enlisting shenanigan auteur Jeff Tremaine (the Jackass series) to assist behind the scenes, its opening credits start with a burst of destructive energy. Reminiscent of the Jackass movie title sequences, a late-for-work Andre rams through buildings and fences but with unsuspecting people in the middle of his chaos. It’s one of the first true joys of Bad Trip as it hints at what’s in store, with random people being caught in the film’s irreverent crosshairs that also help set up the main plot and conflicts. What follows is as successful as any hidden camera prank film can be, though one’s mileage may vary depending on your comedic predilections.

The plot for Bad Trip is all but arbitrary to justify its existence as having some semblance of a narrative. Chris (Andre) and his best friend Bud (Lil Rel Howery) upend their life to go after Chris’ dream girl Maria (Michaela Conlin) in New York by stealing the car of Bud’s ex-con sister Trina (Tiffany Haddish), who is hot on their tail. Haddish’s wild and bombastic comedic style fits in perfectly with the prank nature of the film, as Trina will scare random people with her murderous rage looking for Chris and Bud.

The film operates best when Andre is undercutting expectations of the typical buddy rom-coms by including real people in the story’s delusions, allowing themselves to be manipulated into believing a fabricated reality. Such as when Andre confesses his love of the dream girl to a total stranger on a park bench—it’s the stranger’s ridiculous advice to Andre to drop everything in his life and go after her even though they barely know each other. The idea is absurd but we follow, and it plays to our shared familiarity of the particular beats of cheesy rom-coms. He then breaks out into song and dances with random people in a mall. The singing leads to him getting kicked, cursed at, and chased out.

Andre and Howery are going for the most exaggerated version of raunch that will either leave you dying of laughter or dying for it to be over. With pranks including getting sexually assaulted by a gorilla, a pair of penises caught in a Chinese finger trap, and getting a hand stuck in a blender, the one-note approach to humor may feel tiresome for some viewers. But with the variance of audience reactions and brisk pace, thankfully it never runs out of gas.

Bad Trip is most successful in the magic that is created out of genuine reactions between the unwilling participants. The way people seem to be struck with awe or confusion, deciding whether or not they should help, adds to the film’s narrative approach rather than feeling shoe-horned. Like when Chris and Bud get into a fight after crashing the car, a random stranger holding Chris back and making Bud talk it out: it speaks to the willingness people have to help, but also gives the film a coherent rhythm. We also get to see the fake help as people pull out their phones to record the insanity hoping this brief but obscure moment will go viral shortly after as they scream things like “Oh Lord, praise Jesus!” It’s the kind of lame activity you see pranksters on YouTube label “Social Experiment” that would actually be fitting for the film.

Honing in on Andre’s uncanny ability to lure random people to participate in his absurdity is Bad Trip’s greatest strength. As every narrative beat he wishes to subvert can only happen if people buy into what he’s doing, it’s a fascinating double-edged sword to participate in as an audience member too. We follow the plot knowing it’s not an actual movie but also delight in the hijinks of upending real life to make the movie, totally disrupting any ideals of a controlled life, movie, or reality.