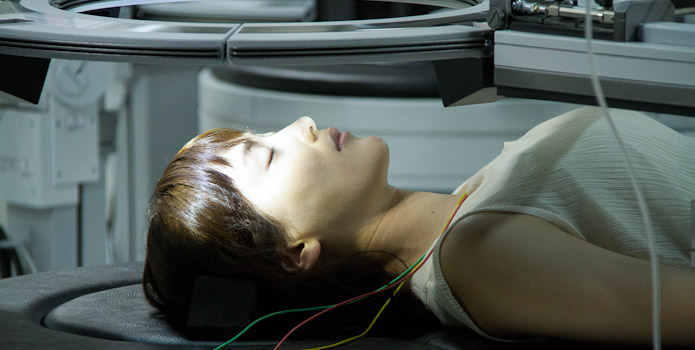 Billowing curtains, industrial decay, skylines shot in the bright of day that still manage to be ominous — all the visual trademarks of celebrated genre director Kiyoshi Kurosawa. But what leads him beyond simply being an art-y genre craftsman to actual artist is ultimately the coherent ideology of his style, and what he puts forth is the concurrent disintegration of an environment and its inhabitants. Actions and motivations becoming increasingly absorbed into a controlled, surreal logic, as completely evidenced in his two best films, the incredibly strange quasi-science fiction, quasi-black comedy, Bright Future, and the genre-free family drama Tokyo Sonata; their shared dramatic fulcrum of occupational — or rather, economic — pressure in modern Japan resulting in madness is certainly no coincidence. This is why his newest feature, REAL, with its combination of cold digital and hot-blooded stream-of-consciousness showcases, seems to suit him beautifully for at least the majority of its runtime. A seemingly happy couple who’ve known each other since childhood, neurosurgeon Koichi (Takeru Satoh) and manga artist Atsumi (Haruka Ayase), have their life shattered when the latter mysteriously attempts suicide, leaving her in a coma. With this being a Toho production, however, we can leave it to some impossible invention to act as the dramatic resolution in figuring out why and how she can be saved. Pleasingly and, despite Kurosawa’s usually deliberate pace, it cuts to the chase. We’re introduced to “sensing,” an exact scientific method of voyaging into another mind, although we’re privy to little explanation or background — it just seems to exist.

Its high-concept sci-fi story of journeying into the mind immediately brings forth thoughts of certain Hollywood films such as Inception or The Cell, yet Kurosawa shows both Nolan and Tarsem just how it’s done, managing to counter both the former’s depressingly logical action movie and the latter’s ’90s Madonna music video of the subconscious. In the first half, his horror chops are on full display, complete with startling imagery that’s accompanied by patient camera work, thus rendering potential jump scares into something truly more sinister — the line between reality and dreaming blurred, if the former could even be said to exist at all.

At the same time, REAL also shares themes with another one of Kurosawa’s films, Pulse, via a mutual fear of technological takeover. Even the insides of the mind are being corrupted by visions of humans as sputtering digital files. And, more so, Koichi and Atsumi become victims of a system, which at least subverts REAL’s studio trappings to a certain, pleasurable degree. It’s a shame that REAL can dissipate by its third act; the dramatic reveals piling up, and as a result its wonderful strangeness beginning to feel somewhat robbed by the need to answer. Predictably, the pained childhood memories stemmed from the death of another being serve as the reasonable explanation for everything. And, in particular, its climax even feels far more ordinary, as our leads are being chased around by a computer-generated dinosaur (or, to be more specific, plesiosaur), which is both too blunt as a symbol (albeit one that would necessitate spoilers to explain) and bland as a set piece. This all seems to evidence REAL as, ultimately, more a studio assignment than personal project for Kurosawa, yet even as a somewhat compromised and uneven film from him, it still displays the talents and obsessions that have made his name.

REAL screens at TIFF on September 6th, 12th and 14th. Watch the trailer above and see our complete coverage below.