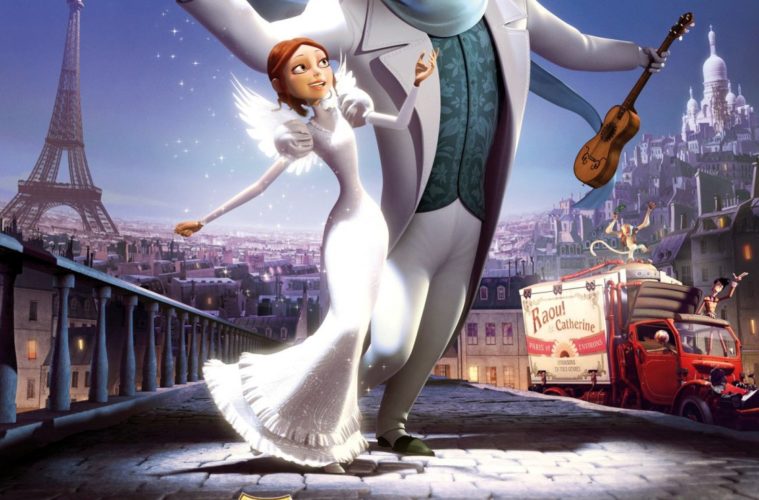 [TIFF Review] A Monster in Paris After a decade in the Hollywood system directing the likes of The Road to El Dorado and Shark Tale, Bibo Bergeron decided to return home to his native France and embark on a passion project. Titled A Monster in Paris and seeing its world premiere at the Toronto International Film Festival, this children’s tale has more in common with a Sylvain Chomet than his Dreamworks past. Not as stylized as The Triplets of Belleville, Bergeron still infuses a flavor all his own with a beautifully rendered 3D Parisian background to set the stage. Possessing the usual children’s fare handicaps of hidden love, best friends, and magical mishap, the film is able to excel beyond the status quo to delight more than any other animated work I’ve seen so far this year.

Taking place in 1910 with the Eiffel Tower drowning in the Seine’s overflow from the Great Flood, there is a lovely hint of yesteryear. Emile (Jay Harrington) shows black and white films through his projection booth, day dreaming of finally asking his ticket taker Maude (Madeline Zima) out on a date. He’s very shy and by the books, traits his friend Raoul (Adam Goldberg) has never attempted to try. A tall, self-centered deliveryman on his trusty, pimped out stead Catherine, (a truck), this boisterous and reckless man is more likely to destroy the whole city than intentionally do good like his dwarf buddy. The two make a good team, however, keeping each other in check as they embark on an unknown adventure. Emile only wanted a ride to buy a new projector belt; he never signed up to be included on a mission to trespass and meddle with a genius botanist’s property. But I guess some of the blame can be placed on the monkey left in charge, failing to keep them outside as ordered.

Once you put a guy like Raoul in close proximity to chemical potions, all hell will break loose. Make those potions exotically awesome—super fertilizer and voice enhancers to name a couple—and experiments will need to be made. So, while the monkey tries his hardest to hide whatever he can on the highest shelves, Raoul can’t stop trying everything within reach. Emile films it all with his recently bought camera, too meek to be prevent the ensuing chaos anyway. But while he stands in the fringes, Raoul clumsily knocks into the shelf and brings down two volatile combinations. As the colorful smoke from the reaction dissipates, Emile finds he’s face-to-face with a menacing seven-foot tall creature. It blasts through the greenhouse’s skylight and hops from rooftop to rooftop scaring the locals and causing a frenzy. Here is where a handful of other characters enter the tale. There is the corrupt police official trying to get a mayoral bid by ‘saving’ the city from its beast (Danny Huston’s Préfet Maynott); his chief of police (Bob Balaban’s Pâté) firmly entrenched as a yes-man in his pocket; the lovely and talented Lucille (Vanessa Paradis), a singer at the Rare Bird who has caught the eye of Maynott and has history with Raoul; and of course Francoeur the monster. As horrific as the giant appears, it ends up he is as harmless as a flea. As frightened by the people he comes in contact with as they are of him, the concoction of potions that were his making also gave a beautiful singing voice. A mess of bleeps normally, when the song bug grabs hold, (in the voice of Sean Lennon), Lucille can do nothing but believe in his docile nature and attempt to help save him from the vile Maynott’s plan for fame.

While Emile, Raoul, and Lucille protect their new friend as they wait for the botanist’s return to set things right, a wealth of side-plot humor ensues. There is a running gag concerning a thief with no luck when near Raoul’s inventions, an old woman who loves to scream and is accosted anytime something bad happens, and of course the scientist’s monkey too. Probably the funniest character of the whole film, this monkey has a smarter brain than most humans—especially ones named Raoul. Communicating through note cards, this personified primate is allowed to be one of the team and also a cute inclusion for the kids. The fact these gags are funnier than the plot isn’t necessarily a good thing, but at least they keep it fun. Sure there’s the pining for love between Emile and Maude or Raoul and Lucille, but those happily ever afters are inevitable. The real success is in the monster hunt and what Francoeur’s friends are willing and able to do to keep him safe.

The music is catchy as it harkens back, the title track and a couple by Paradis could see Oscar nods as they definitely keep your foot tapping. A crucial piece to the proceedings too, it’s Francoeur’s musicality that allows his coexistence with humans, albeit in disguise. The city loves him donning his white suit with hat and his friends do what they can to keep Maynott off his trail. But when the police chief goes off the deep end, Huston’s crazed voice slowly falling into Kelsey Grammer/Sideshow Bob territory, all bets are off. Emile and Raoul find themselves staring in the face of hero-making actions while Maude and Lucille swoon in hopes they finally make their move. So like Paris always provides, there is love, laughter, and artistic splendor to be had. Bibo Bergeron definitely made the right choice going home to utilize his originality and add another hat in the competition for animation supremacy. Victory isn’t yet his—Pixar has a ways to fall first—but I definitely like where he’s heading.