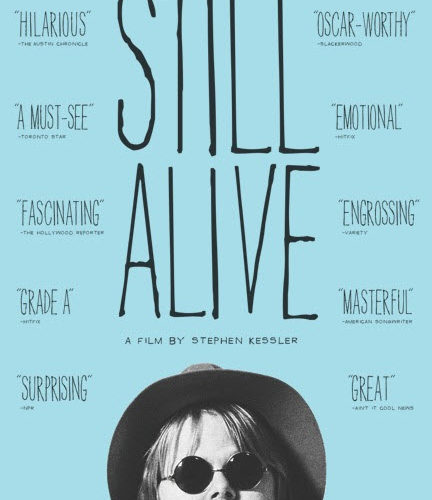 The title Paul Williams: Still Alive is either the meanest or the most life-affirming in recent documentary history, and after watching Stephen Kessler’s film about one of the most ubiquitous and utterly unique singer-songwriters in pop history, I still can’t decide which. It’s not that the director does not adore his subject — he does, from the first frame to the last. But in final analysis, the film, while very entertaining, feels too focused on the negatives of Paul Williams’ story.

To understand why this is problematic, one must first ask the question, “Who is Paul Williams?” For those of us who came of age post-1980, it’s an apt query; the short, chunky man-about-Hollywood’s star fell in the 80s, mainly due to his addictions. (Today, he is 16 years sober.) But if you were watching TV in the 70s, you knew, and probably loved, Paul Williams. Consider: He wrote or co-wrote songs Barbara Streisand’s “Evergreen,” Three Dog Night’s oh-so-70s “An Old-Fashioned Love Song,” the Carpenters’ “We’ve Only Just Begun,” and, yes, the Muppets’ “Rainbow Connection.” He was also busy on talk shows, charming Johnny Carson, among others, and even starring in Brian De Palma’s cult classic Phantom of the Paradise. It is that film which drew in director Stephen Kessler, a commercials helmer who was also behind the camera for 1997’s Vegas Vacation. He grew up loving the offbeat Williams, telling us in voiceover, “I always thought he died too young.” But as an internet search discovers, Paul Williams was, indeed, still alive. In fact he was about to perform at “Phantompalooza,” a celebration of De Palma’s film in Winnipeg. (Apparently, Paradise was a hit in two cities: Paris and Winnipeg.) Kessler is not the only one who was unsure of what became of Williams; as one fan asks, “Everyone wondered what happened to you.” Williams’ reply is an indicator of his winning personality: “I got DRUNNNK.”

Kessler approaches the icon about a documentary, and after some prodding, Williams agrees. Thus begins an odd couple-ish friendship between director and subject. While it is fitting that this all occurs onscreen — a documentary about a figure as semi-serious as Paul Williams must itself be semi-serious — it is quite apparent, from the get-go, that Kessler is as much a focus as Williams. That’s a problem. It’s not that Kessler isn’t humorous. But he is also often a neurotic annoyance, and this becomes especially apparent during the film’s second half. (Wait until you get to the long Philippines sequence, in which the director frets about the dangers of travel to that country, while Williams shrugs and smiles.) By that point, we’re pretty clear on the Paul Williams story, and it has become obvious to the viewer that Williams is not only as happy as he’s ever been, but that the focus on “what went wrong” is almost insulting. (One question about his past causes him to sternly rebuke Kessler.) But Kessler continues to chip away, even showing Williams a grim TV clip in which he was clearly high. The star can only watch so much, and walks away, and the audience feels for him. If he occasionally seems annoyed at the intrusion into his family-focused current life, who can blame him?

Happily, this feeling of sadness does not overpower the film. For the most part, the old clips and songs are joyous, and while Still Alive feels a bit overlong even at a short 87 minutes, it is nevertheless a fascinating study of a star who is the epitome of offbeat, one who was swallowed by addiction, but came out on the other side. Paul Williams: Still Alive is not as strong a film as its subject is an entertainer, but even so, Kessler must be applauded for bringing Williams and his story back into the public eye. The man wrote “Rainbow Connection,” folks. Take heed.