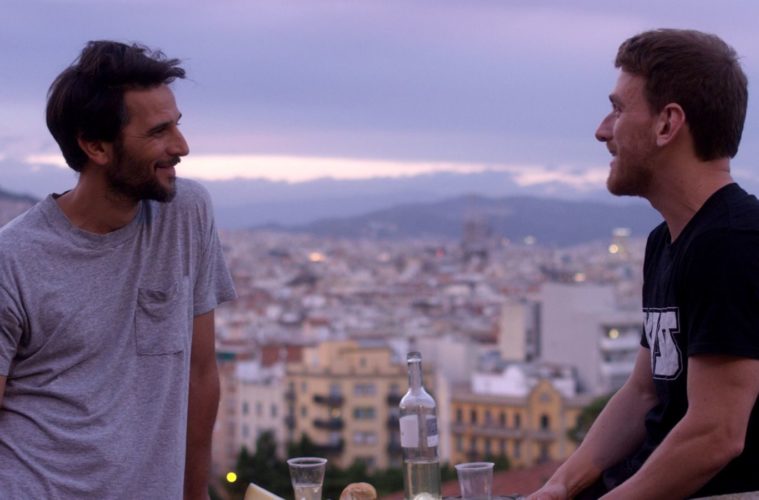 ‘End of the Century’ Director Lucio Castro on His Intimate, Epic Vision of the Bonds Across Time

Most discussions about movies that examine time and space are reserved for those doing it on a grand scale–2001: A Space Odyssey or Interstellar, films known more for their visual exploration of these ideas. Lucio Castro’s feature debut End of the Century, following lovers Ocho (Juan Barberini) and Javi (Ramone Pujol) over twenty years, shows the nimble yet affecting inventiveness at which these ideas can be explored. Time shifts at a moment’s notice without much in the way of visual cues. We know time changed by Ocho’s reaction and quick adaptation to every new scenario. He is the connective tissue between hook up, forgotten rendezvous, and childbirth. These are tactical moments in the course of a twenty-year relationship so clearly delineated the actors don’t need make-up to show the passage of time.

We spoke with director Lucio Castro during Outfest in Los Angeles to discuss his small-scale epic of the passage of time. Castro discusses End of the Century’s taut development and strong vision, using contemporary gay sex mores to date his movie in our time, and using a unique kind of time travel to examine how relationships change, along with asking the question, “What is time, what is a story?”

The Film Stage: Is any of your own story in the movie?

Lucio Castro: There’s definitely a lot that is related to my own experience, especially with my relationship life. I’m not any of the characters. It’s not based on my life directly and it’s not really my story. But there are things I’ve lived or heard, or some things I just made up. Even the character of Sonya (Mía Maestro), when she tells that story about a breakup, that’s something that happened to me as well. There’s definitely a lot of things that refer to my life even though it’s not really autobiographical.

The movie is under 90 minutes, it debuted at New Directors/New Films, and you had a pretty short festival window. It’s almost like you really know what you want from the film. How did you develop such a strong vision for what you want, for both the film and the journey it’s taking?

It’s an interesting thing. I’ve written full feature films in the past, I’ve done shorts and watched a crazy amount of films. This one I wrote very fast and I started writing without knowing where it was going. As I wrote it, I felt like I was reading the story. I never really rewrote it. I just did a few scenes, maybe, but there wasn’t really a big rewrite in any sense. The actors added a lot of stuff and some things have changed but not much, then the editing was exactly like the way I wrote it. Being edited as written, there weren’t a lot of people involved. This one for some reason I didn’t want too–not that I didn’t need feedback, but I did feel very confident that this was the movie I wanted to make. In the end, it felt like something you could connect with or can’t. I feel like people would say it has its own world and that world feels determined. There was not a lot of exterior influence in End of Century. That’s why I think it feels very connected to one world or one spirit or one vision. When you’re directing actors, specifically when you were directing Juan Barberini and Ramone Pujol, was it necessary for them to have a certain chemistry or was their acting enough?

When I cast them I did not try out their chemistry. So, I guess the answer to that question would be that the acting is enough. I wanted to work with two very intelligent actors for these parts. Because it’s a movie done with so few people I wanted the actors to be really, really smart. Not only to be able to say lines really fast, but to be sensitive to the story. The reality of the movie starts breaking up at a certain point, and I wanted actors who didn’t want me to give answers all the time. I feel like the two actors, after they read the script, I talked to them and I knew they were people I could work with and would be great for the characters. I started with Juan then I found Ramone.

Was the story designed to reflect how people change over the course of a relationship, when you don’t recognize the person you first met?

That’s definitely a good interpretation of it. I totally agree Ocho (Barberini) changed over the relationship. Realistically, the first part of the movie which is very straight, was inspired by a friend of mine who met this guy three times and the first two times he didn’t remember they had sex and on the third encounter they became boyfriends. That was over a three year period. I liked that idea. I feel like when you are with someone for a long time, sometimes you feel like you were doing something yesterday, but it was actually ten years ago, because you’re with the same person all the time and you both change. Time becomes very fluid in a relationship.

You do some things that ground the movie in 2018/2019. Why did you have Ocho and Javi stop to get a condom before having sex? One of the characters is on PrEP and he’s confident in his HIV status.

The other guy is not on PrEP and doesn’t trust that the other guy is on PrEP and that is something that has always fascinated me with gay people, the idea of trust. Sex can be happening very easily, but they might be very mistrustful of what each other says about their HIV or STI status. So with gay sex, it may be easier to trust yourself with the protection of your body than trust someone else.

You ground your movie in this relationship between Ocho and Javi and the nature of sex in our era, but it’s also about time and space. It’s also a journey asking, “What is a movie, what is a story?’

That’s something I totally love and care about and want to explore more. My next movie is actually a lot of that too. The idea of time in a movie is fascinating–it’s the only art where time is a thing. You look at a painting and you can see the whole painting. In film, it’s always given in some sort of timeframe. It can be an hour and a half that is actually an hour and a half in someone’s life. It could be an hour and a half over 100 years, or one minute. I always loved the idea of playing with that. Film has a lot of rules but also flexibility. My movies are actually very simple. The way I add time is in a really simple way. I do feel that there is so much to play with and explore. That this film is about space and time. I totally and completely agree.

End of the Century is now playing at NYC’S IFC Center and expands in the coming weeks.