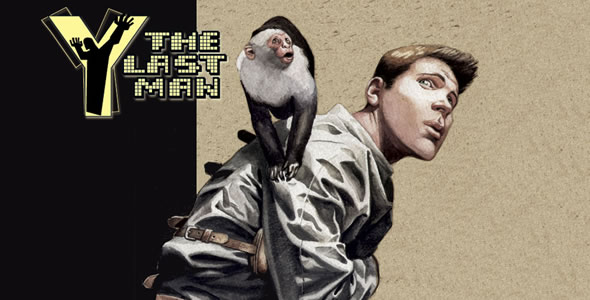 Several questions are raised by such a development, the primary being this: Will Y be told in the form of a trilogy — as past helmers, like D.J. Caruso and Louis Leterrier wanted — or in the form of a single film? While we don’t know at this moment, THR gives approximately zero indication that Y is being turned into a franchise — and this could be a problem. Caruso even publicly admitted that the process of condensing was his main reason for departure, saying “I didn’t think that you could take Yorick’s story and put it in to a two-hour movie and do it justice.” Anybody else think New Line changed their tune in the time since?

The uninitiated should know that Y: The Last Man — created by Vaughan and illustrator Pia Guerra — centers on a young man, Yorick Brown, who finds himself (along with his pet monkey, Ampersand) to be the last living male on the planet Earth in the wake of an unexplained plague. But, although he’s become the future of the human race in a few minutes, all he wants to do is reach his girlfriend, Beth, who is stuck in Australia. To give away more would be criminal; please just trust me when I say that it’s one of the finest pieces of sci-fi storytelling I’ve ever encountered.

And Y: The Last Man is so difficult to base one “good” film on because of the story itself. Vaughan would, admittedly, drag his feet with a couple of issues here or there, but even these less-than-thrilling chapters didn’t sacrifice character development, the building of a complex world, or good old fashioned entertainment.

Thus, the effect of reading over 1,000 pages devoted to these characters and their incredible journey — one filled with romance, action, conspiracy theories, engaging subplots, flashbacks, and everything else under the storytelling sun — led to an ending that has an almost insurmountable emotional wallop. Trying to cram that into 100 minutes is a fool’s errand — one that Vaughan himself couldn’t even pull off. You’ll have to excuse me if a single-film take from two seemingly inexperienced writers gives me pause.

Do you think a film version of Y: The Last Man could work? How about one done in under two hours?