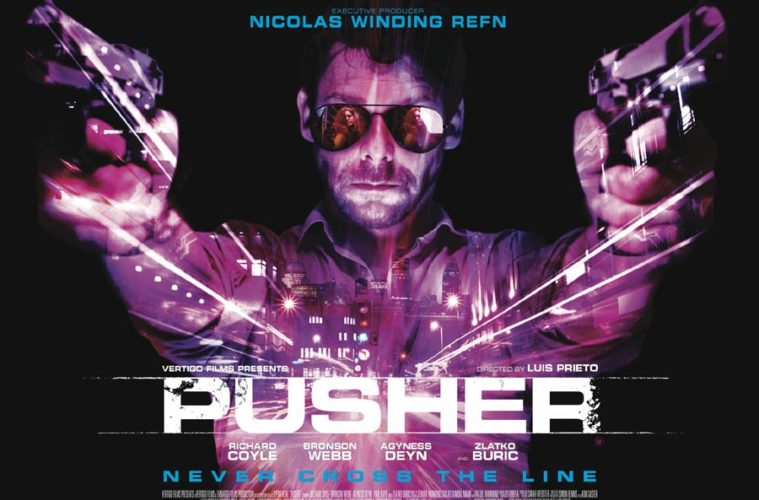 Nicolas Winding Refn became a real commodity real fast, though his immense talent as a filmmaker more than explains a) why this happened and b) why we care. He does, however, have his name on one project that we haven’t paid much attention to: the British remake of his debut, 1996’s gritty crime film Pusher. Directed by Luis Prieto and executive produced by the original creator himself, Pusher follows the same story as its original, wherein a drug dealer has to pay back a kingpin after screwing up a job. This time, in England.

Production wrapped sometime in the last month, and Deadline reports that The Weinstein Company has — through their new outlet, Radius — picked up American rights to the picture. And, in a somewhat poetic turn, the acquisition was partially made by Tom Quinn and Jason Janego, who ran Magnolia when the studio put out Winding Refn‘s original several years ago; take that as a good sign when it comes to the brass behind the scenes. The movie itself? Optimistic expectations will have to wait

Read the press release below:

“New York, NY, February 9, 2012 – The Weinstein Company (TWC) announced today that its new label, Radius-TWC, has acquired from Gaumont the U.S. and Caribbean basin distribution rights to PUSHER, an English-language remake of the 1996 cult hit directed by Nicolas Winding Refn (DRIVE) and written by Refn and Jens Dahl. Refn was closely involved in the production of the remake, which is directed by award-winning young filmmaker Luis Prieto (BAMBOLEHO) and written by Matthew Read. PUSHER is produced by Rupert Preston for Vertigo Films, and by Christopher Simon and Felix Vossen for Embargo Films. Nicolas Winding Refn is the executive producer. The announcement was made by Radius-TWC Co-Presidents Tom Quinn and Jason Janego.

PUSHER stars Richard Coyle (W.E.), model/actress Agyness Deyn (CLASH OF THE TITANS), Bronson Webb (PIRATES OF THE CARIBBEAN: ON STRANGER TIDES), Mem Ferda (THE DEVIL’S DOUBLE), and Zlatko Buric, who reprises his original PUSHER role of Milo. The groundbreaking electronic duo Orbital is scoring the film; the duo’s new studio album, its first in eight years, will be released in April. Radius-TWC plans to release PUSHER in late 2012.

With the acquisition of the new PUSHER, Radius Co-Presidents Quinn and Janego are returning to a project they first championed during their tenure at Magnolia Pictures, where they acquired Refn’s entire PUSHER trilogy for U.S. distribution.

Commented Quinn and Janego, “This acquisition is a rare and wonderful instance of lightning striking twice. We’re very proud to have brought the original PUSHER to American audiences, and we’re excited to reprise our role as distributors with Luis Prieto’s sexy English reboot. Richard Coyle and Agyness Deyn are a sizzling hot duo, and having Zlatko Buric back in the role he originated is an amazing treat. PUSHER is no ordinary remake, and we think it speaks volumes that Nicolas Widing Refn has given the completed film his whole-hearted blessing.”

Said producer Preston, “Pusher has a vibe, energy and vision that audiences will love. We could think of no better company than Radius/TWC to launch it in the US.”

The deal was negotiated for Radius-TWC by Quinn and Janego; and by Cécile Gaget, Head of Gaumont International, on behalf of the producers.”

Furthermore, Variety has news that Samuel Goldwyn Films will release Scott Cervine‘s People v. The State of Illusion, a docudrama which “explores the science and power of our perceptions and imagination.” Setting the action in the New Mexico State Penitentiary, Illusion focuses on “Aaron Roberts, a single father arrested and tried on charges following an incident that claims the life of a woman. His daughter becomes a ward of the State and an attorney represents her in an innovative case that explores the science and power of perception and imagination.”

In terms of straight “actors,” IMDb only lists J.B. Tuttle, Amy Baklini, and Kevin McDonald; Variety also mentions several doctors among those who appear onscreen. Now that there’s some mystery over it all, I’m thinking that a March release might be worth paying attention to; reviews are a little mixed, but that won’t impede me — nor should it stop you, either.

THR brings some more distribution news out of Berlin, having learned that the Jenna Fischer-starrer The Giant Mechanical Man, from writer and director Lee Kirk, has been picked up by Tribeca Films. The romantic comedy revolves around “Janice (Fischer), a young woman who can’t quite grow up and Tim (Chris Messina), a street artist who performs as a living statue. Out of work and living with her overbearing sister (Malin Akerman), Janice is pressured to date an arrogant self-help guru (Topher Grace), but she comes to realize only one person really matters to her.” Mad Men‘s Rich Sommer, Lucy Punch (Hot Fuzz), and Mr. Show co-creator Bob Odenkirk also make an appearance. Expect a spring opening in limited theaters and on VOD, or even an appearance at this year’s Tribeca Film Festival.

Which of these three would you most prefer to check out?