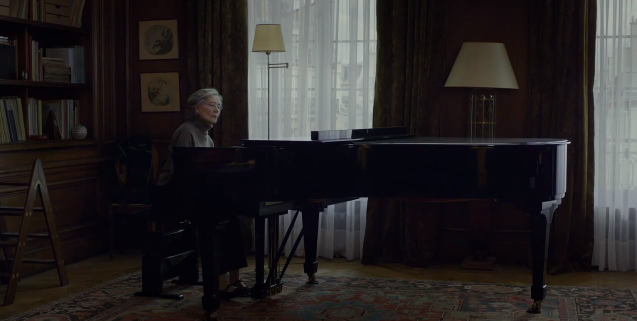 If you’ve yet to see Michael Haneke‘s Palme d’Or-winning Amour, much of the film remains a slight mystery. Sure, you know it’s about an old woman whose stroke proves debilitating to both the health of her body and lengthy marriage — people say it’s great, too — but how much of it have you seen? Past a small trailer, it’s only been dead quiet on the footage front.

With screenings popping up around the country and a theatrical release less than two months away, however, the canvas is beginning to open up. Two brief clips have premiered, (one from THR) showing off some work from leads Emmanuelle Riva and Jean-Louis Trintignant; “brief,” though, because I think Sony Pictures Classics are wise enough to withhold the rest (or most of the rest) for Amour itself. While that’s a wise move, one I respect, and something that should only be continued, even that isn’t enough for me, the big Haneke fan, to actually lay eyes upon these. If you’ve come this far, it should be easy to go a little further.

The two clips can be seen below:

Amour will open in limited release on December 19th.

By watching these two clips, have you become more excited for Haneke’s newest film?