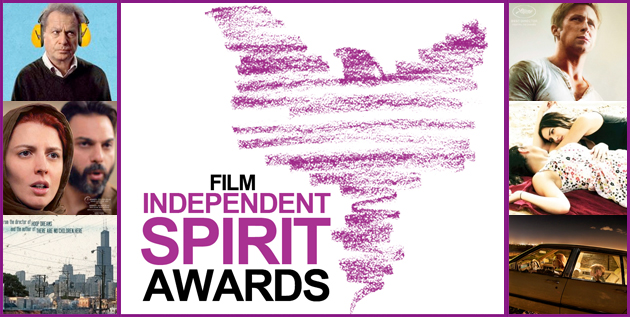 [Voting Spirit] Talking ‘The Interrupters,’ ‘Footnote,’ ‘Think of Me,’ ‘Drive,’ ‘An African Election,’ ‘A Separation,’ and ‘Circumstance’ Last week I shared my thoughts on some of the films I loathed this year, and so am thrilled to share some of my favorites from this year’s Spirit line-up with you today. Let’s get to it.

The Interrupters ~ Directed by Steve James

“I can’t aid and abed shit. I flush shit,” these are the tough love words of Ameena Matthews, a former gang member turned violence interrupter who dedicates herself and her time to the rage-filled residents of Chicago, counseling them to stop the gang violence that has long-ravaged the community. Hoop Dreams director Steve James dives deep into the Interrupters movement revealing the havoc such rampant, spontaneous violence has wrought. It’s a striking doc that captures the best and worst of human nature, in our ability to forgive and destroy. I know this may sound familiar, but unlike Butt Naked, these former killers and thugs have turned over a new leaf, not only to improve their own lives, but that of their families and neighbors. It’s an inspirational journey of self-improvement and the power of community.

Before I saw Footnote, I was perplexed by the film’s nomination for Best Screenplay, solely because it seemed peculiar to me to nominate a screenplay that’s not in English for an American award ceremony. But I underestimated Footnote. This Israeli offering, which is entirely in Hebrew, transcends the language barrier with its deft and spirited storytelling and entirely winsome and humanistic humor. A few weeks back I lamented that a comedy about insurance salesmen was unavoidably unfunny, so I know how it sounds that I’m telling you a family drama about a father and son who are competing Talmud academics is utterly hilarious. But it is. And that’s because Joseph Cedar, Footnote’s writer-director, firmly grounds his tale in a recognizable family with masterfully realized characters, and then soars into poetic and sometimes silly tangents or footnotes about these people and their perceptions of the world. It didn’t matter one lick that I’m a gentile with not even a basic understanding of the Talmud, because at its core Footnote is about a parent and child who love each other but have little to nothing in common, aside from their incredibly specific field of study.

Truly, this is an incredible movie. Smart, poignant, filled with extraordinary performances, and above all funny. Seek it out.

Think of Me ~ Directed by Bryan Wizemann

The latest from writer-director Bryan Wizemann focuses on the obstacles a single mom in Las Vegas faces in trying to care for her young daughter. Six Feet Under star Lauren Ambrose leads the film as this harried mother, who desperately scrapes together cash for necessities but can’t manage to get her priorities straight. Ambrose, who also co-produced the drama, is in nearly every frame of the feature, and she shoulders it impressively considering it’s an almost plotless endeavor. Of course as a slice of life, character-driven narrative, such meandering is expected. Unfortunately the protagonist and her obstacles are so predictable that there’s little here to be intrigued by.

I have to admit I purposely avoided Nicolas Winding Refn’s homage to old-school loners during its initial theatrical run because a trusted friend called it ”the most nihilistic” movie he’d ever seen. I typically abhor nihilism in cinema, because to me – what’s the point? (Har har!) So I’d steered clear of Drive. But now that I’ve seen it for myself, I have to admit I not only think my friend was wrong about the film being nihilistic, but that I found Drive to be surprisingly sweet and sentimental.

Yes, the story of a nameless stunt driver (Ryan Gosling) is punctuated with intense and potentially overwrought violence, but the story itself is innocently romantic. This driver becomes infatuated with his neighbor (Carey Mulligan) a young mother struggling to care for her son alone while her husband is in prison. And once her man returns with mobsters threatening his family, this enigmatic hero offers to assist him in a heist to save the family from further violence. It’s not to get the girl but to save her.

Gosling is fantastic in a surprisingly underplayed performance. His role is almost mute, communicated through his subtle facial expressions and self-assured physicality. He’s a familiar hero from movies of yesteryear, a mix of John Wayne and James Dean. And though the plot tells us little about this character—not even his name—Gosling’s slow burn performance gives us enough to be committed to his journey

Of course the real performance buzz has been around Albert Brooks who is unexpectedly cast as a merciless gangster here. The performer known for his sidesplitting improv is mesmerizing as Bernie Rose, in part because he refuses to play him as an outright tough guy. (That’s for Ron Perlman to handle.) Instead, he paints Rose as a cultured man of leisure with a tenacious survival instinct. He doesn’t revel in the violence he commits, but sees it as necessary to keep himself on top. It makes him almost empathetic. But only almost.

Ultimately Drive is a fluid and haunting romantic drama about people who wish they could live above violence, but aren’t afraid to get their hands dirty when it counts.

This doc takes viewers behind-the-scenes of the electoral process in Ghana, revealing some shocking similarities to a certain controversial American election. However, the dry style of the doc doesn’t do justice to its subject matter. To be perfectly frank, as I saw this hot on the heels of the truly extraordinary Redemption of General Butt Naked, a documentary where African politics was also the focus, An African Election came off as interesting but ultimately lacking in storytelling intrigue.

A Separation ~ Directed by Asghar Farhadi

This Iranian thriller is hands down my favorite film of 2011. Set in contemporary Iran A Separation focuses on a conflict that arises between two families of different social classes that will affect their lives forever. One heart-wrenching scene determines how you read everything that follows, and the results you come up with may be totally different from another moviegoer, yet completely valid. To me, here is where the Spirit’s limitation imposed on foreign features is an utter shame as A Separation is not only incredible filmmaking, but also filled with truly remarkable performances that manage to lose nothing in translation. Its four adult leads received the coveted honor of the Silver Bear at the Berlin International Film Festival last year, and I think additional praise is owed to the film’s intriguing ingénue Sarina Farhadi—the director’s adolescent daughter—who turns in an unforgettable and crucial performance as a girl forced to grow up fast when her father is accused of a horrible crime.

A Separation is astounding on many fronts, but what may be most striking is that despite being firmly rooted in modern-day Iran—a reality few Americans are really familiar with—the film quickly and clearly establishes its world with visual specificity that allows its audience to see a universal story of truth, family, and impossible choices unfold. While there are many exemplary films nominated this year, I believe A Separation will prove more enduring than the rest. It’s riveting and extraordinary. [My full review]

This daring tale of first love and Sapphic affection is also set in Iran, but shot in Lebanon as its subject matter would prove too salacious to shoot safely on location in the Islamic Republic. This coming-of-age drama centers on two 16-year-old girls whose teen rebellion finds outlets in Tehran’s underground club scene. But soon this teasing taste of freedom encourages them to explore something far more dangerous in such a repressive setting: love for each other. Writer-Director Maryam Keshavarz is Iranian-American, and should be lauded for making such a daring picture, a picture that means she can never go to Iran without fearing imprisonment or worse. However, for all its good intentions this drama feels underdeveloped and emotionally immature. For one thing, Keshavarz takes for granted that western audiences will be aware of the strict morality laws in place in Iran, and without a clear understanding of the rules the film’s plot is at times a bit baffling.

Now, I of course understand that some films are not made for Americans, but produced in part by the Sundance Institute, Circumstance clearly was. Keshavarz has admitted she has no hope that her film would screen in Iran, so it’s doubtful her primary audience is Iranian. Beyond that A Separation’s director Asghar Farhadi has publicly stated he made his film for Iranians—he seemed almost apathetic about an American audience’s attention—yet his drama works beyond its intended viewership. So to me, it’s not a question of audience but of the level of filmmaking.

Another obstacle for me is that Circumstance seems a sister piece to Indian director Deepa Mehta’s incendiary lesbian-romance Fire, which drew international notice in 1996. Like Circumstance it centered on two women who fall in love in a society that sees lesbianism as a grave sin, a belief that is regularly undermined in each film by presenting truly perverse sexual acts. Fire shook me to my core when I first saw it, while Circumstance mostly reminded me of Fire.

However, I don’t mean to get down on Circumstance. It is Keshavarz’s first narrative feature, and while I felt it was a little undercooked, it did display a bravery in its subject matter and a sharp honesty in its direction. Plus, she has a real eye for talent, and while most of her cast is wonderful, I’m especially hoping to see more of the warmly charismatic Nikohl Boosheri, who plays the willful and irrepressible Atafeh. To surmise, Circumstance is good, not great, but shows great promise in Keshavarz’s talent.

State of Mind: Wonderful. It’s hard to hope for a better line up. There were some truly terrific films in this batch that I hope to revisit soon.

Check back next Tuesday, when Kristy will discuss the last of this year’s nominees.