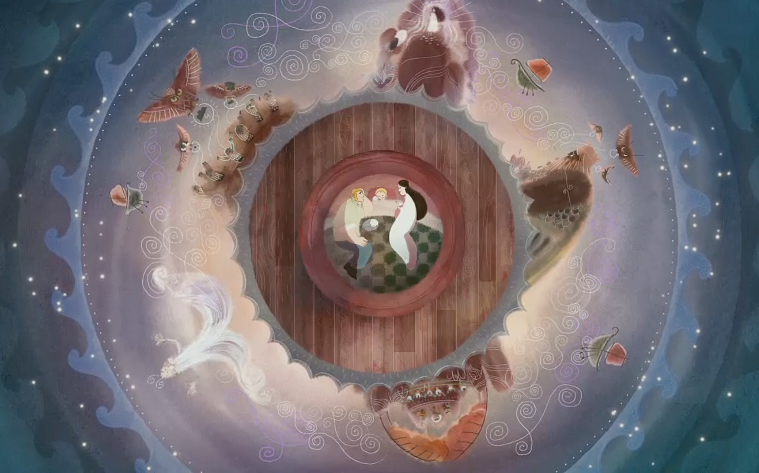 For every Pixar rehash and DreamWorks who-cares, the world of animation can still provide lively, innovative ways of reconsidering the medium. I don’t know if Song of the Sea will be able to stand alongside some greats from recent years, but there is promise: along with its Best Animated Feature bid made by GKids, a new trailer, following May’s preview, displays the sort of visual imagination one might expect from Tomm Moore, who’s following-up 2009’s much-acclaimed (albeit underseen) The Secret of Kells.

If the narrative being promoted is a smidge too “kid’s adventure” for my tastes, Song seems able to compensate in other departments. These images are a treat for the eyes — speaking for both the level of detail and rhythm of any object’s particular movement — and its apparent devotions to Irish myth, not exactly a huge staple of 21st-century animation, lend it a unique interest. This, backed by some strong reviews from a few months back, is one of the few December releases we can be genuinely excited for. In this enchanting new story from the Academy Award-nominated director of The Secret of Kells, Ben and his little sister Saoirse—the last Seal-child—must embark on a fantastic journey across a fading world of ancient legend and magic in an attempt to return to their home by the sea. The film takes inspiration from the mythological Selkies of Irish folklore, who live as seals in the sea but become humans on land.

From AMPAS, a full list of Best Animated Feature contenders:

Big Hero 6
The Book of Life
The Boxtrolls
Cheatin’
Giovanni’s Island
Henry & Me
The Hero of Color City
How to Train Your Dragon 2
Jack and the Cuckoo-Clock Heart
Legends of Oz: Dorothy’s Return
The Lego Movie
Minuscule – Valley of the Lost Ants
Mr. Peabody & Sherman
Penguins of Madagascar
The Pirate Fairy
Planes: Fire & Rescue
Rio 2
Rocks in My Pockets
Song of the Sea
The Tale of the Princess Kaguya

Song of the Sea will enter a limited release on December 19.