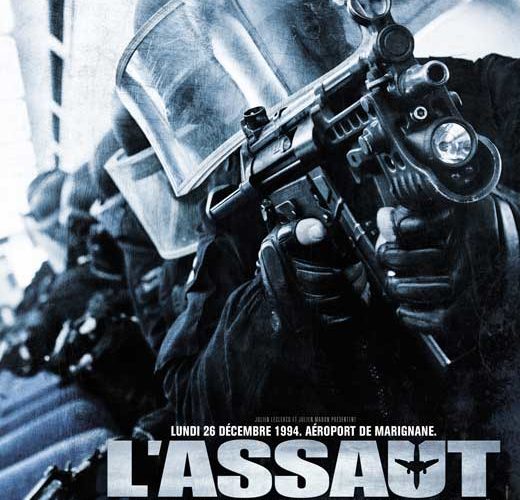 Reflecting our time, terrorism thrillers have become a very commonplace occurrence in the past few years. While some can be fantastic (Munich), others leave one with a sense that it works as neither an action movie or a commentary on today’s world (Green Zone). Sadly, The Assault falls firmly into that latter category.

The French film, which is directed by Julien Leclercq, tells the true story of the Algerian Armed Islamic Group’s hijacking of an airplane going from Algiers’ airport to France on Christmas Eve in 1994. All of the passengers were at a great danger, and the picture does an effective job of evoking that feeling. These aren’t terrorists who are all bark and no bite. We see them kill several hostages, and they aren’t willing to give in to any requests from negotiators.

On the other side of this conflict is our lead, Thierry (Vincent Elbaz), a SWAT officer who sees tough things while on the job. He’s caring for his wife and young daughter, but his spouse isn’t thrilled that his occupation puts him in a constant danger.

Does that sound kind of familiar? If it does, get used to it. The Assault is a movie that I feel as if I’ve seen multiple times before, and usually told in a better way. You’ve got your aforementioned family man lead, terrorists chanting “Allahu Akbar!,” and the commander who doesn’t want to go along with the plan. There is barely an ounce of originality.

The one good element of the film – that being the action sequences – are overly familiar as well. It’s the typical close-up, quick cut action sequences that pop up in something like the Bourne movies or half of the other action movies released today. Still, that’s not actually such a bad thing. Well-directed action sequences should be recognized for what they get right, and these are thrilling enough.

Simon Moutaïrou‘s screenplay fails on a fundamental level, with the stories bouncing back and forth from our lead to the terrorists to the police force behind the scenes. The more it goes from one storyline to the other, the less interested I became in everything that was happening. Visually speaking, it’s a mixed bag. Leclercq‘s direction allows for scenes to flow naturally, and he has an eye for being behind the camera. However, the cinematography by Thierry Pouget is given the look of a cable drama series. It’s gray, dull and just sort of dreary.

While The Assault heavily falters in several aspects, I ultimately didn’t hate it, if only due to the fact that it’s a harmless affair. Taking a true story like this one and making it boring is a shame, but I ultimately just shrugged the whole thing off five minutes after it ended. I suspect many people may end up feeling this way as well.