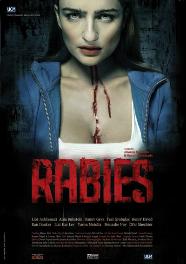 Rabies, which has been touted as Israel’s first horror movie, is something that revels in subverting our expectations. The concept of teenagers getting lost in the woods, only to encounter a psychotic killer, is one of the oldest of the horror genre. I’m not one to complain about a derivative plot. It’s ultimately the way the story is told, and not the story itself, that matters the most to me.

So, it makes sense that much of the reason I appreciated this movie is because it does this kind of thing a little differently. While we have the generic leads of the nice guy, the jerk, the innocent girl and her (also female) friend, they don’t encounter the type of danger you would expect. While there is more or less a main villain at play here, so much of the danger that they encounter mostly comes from their environment and own stupidity.

The main story follows four teenagers who briefly stop near a forest, and soon encounter a man in bloody clothing who claims that he’s trying to find his sister, who’s stuck in a trap in the woods. The two males (Ofer Shechter and Ran Danker) follow him, while the girls (Yael Grobglas and Ania Bukstein) stay behind with the car. As the three men go looking for the sister, two police officers (Danny Geva and Lior Ashkenazi) stop by the car, and one of the cops – being someone who abuses his power – gives the two girls inappropriate searches. Meanwhile, the men come to where the sister was shown at the beginning of the film, but she’s gone, having been rescued by a park ranger. Things get a little more complicated when one of the girls revolts by grabbing the corrupt police officer’s gun, threatening the two cops with it. And then one of the men in the woods gets stuck in a bear trap…

What I’m getting at here is that much happens in Rabies, and it’s screenwriters/directors Aharon Keshales and Navot Papushadoclever are clever enough to make sure that most of it pays off. The tension in the scenes is very real; as this is a horror movie, no one is safe. Where it begins to go places you don’t expect comes in the form of how the characters go about their survival. In most movies, they wouldn’t be people of action, only running for their survival. But scenes like one of our female leads using a weapon against authority figures, or the fact that the only real villain barely shows up which kept me interested. Oddly enough, the violence here isn’t too graphic, with much of the bloodshed happening after the fact. Again: this is a different spin on a very old story.

The film’s main weaknesses come from its unfocused narrative. There are entire subplots that could have been cut, which is exemplified by the good cop needing to get home to his girlfriend. There’s almost no establishment of him from the beginning, making it fall flat and through this, I came to the realization that the only feeling the movie could successfully get across was one of suspense.

The truth, however, is that a horror movie is supposed to communicate that sense more than any other. One that doesn’t is the same thing as a comedy that doesn’t make you laugh. Rabies mostly does what it needs to do well, and for that I have to give it credit. This is an effective little movie, and one that could teach Hollywood a thing or two.