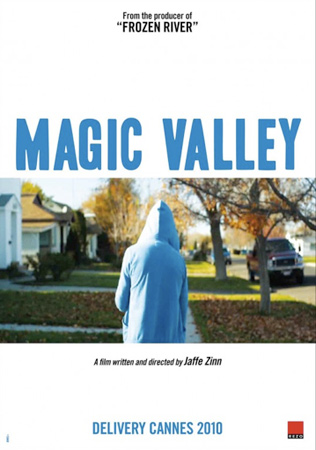 Magic Valley is – as I learned while writing this review – the kind of film that grows in your mind over time. For the past couple of days, I’ve been thinking more and more about its characters and events, coming to the conclusion that it’s much more original than I initially gave it credit for. At the same time, most audiences may sit through and come out of this movie bewildered by what writer and director Jaffe Zinn has concocted.

The basic plot follows several denizens of the small town of Buhl, Idaho (also a former title for the film). You have your lead TJ Waggs (Kyle Gallner), a teenage boy who feels immense guilt over something that’s recently happened; what that thing is, however, is for viewers to learn. There’s also sheriff Ed Halfner (the great Scott Glenn), who finds that in this small town, menial errands like obtaining bales of hay are of the highest concern. After all, a place like this doesn’t have a lot of crime for him to crack down on in the first place. There’s also the parents of a young girl, with the mother (Alison Elliot) pre-occupied with getting her animal to the veterinarian, but who’s also concerned about her daughter who she can’t reach. Meanwhile, the father (Brad William Henke) finds all of the fish in his lake dead, and gets into a contention with a wealthy landowner. These events will soon be shaken up, however, as two young boys find the dead body of a young girl. There are a lot of characters in Magic Valley, and all of them are given something to do, but there’s very little in terms of actual plot development. In fact, it wouldn’t be an exaggeration to say that entire scenes go by with only small acts occurring. Some of these include, among others, the mother taking an animal to the vet, Halfner describing an episode of Walker: Texas Ranger to a young cop and TJ watching kids throw dead fish into a lawn mower blade for a Scouts commercial (yes, really). But just because they may not advance the plot forward a whole lot doesn’t mean that they’re not in service of something. Fields of grass, small houses, local supermarkets and an empty stretch of highway don’t leave any doubt as to this being a small place. All of these help build mood, and the effect of the evoked atmosphere (aided by Sean Kirby‘s cinematography) is undeniable.

It being so remote means that the events occurring under the surface will have an even greater impact than they normally would. The death of a young girl in a small town is something that has been done plenty of times before (such as in Twin Peaks or AMC’s current The Killing), but this does it much differently. We know fairly early on that she’s died – and, frankly, who committed the murder – so it’s all about build-up for the other characters. Where it does this all differently is the fact that we don’t see the aftermath of the body’s discovery; most works dealing with similar subject matter (including the ones mentioned above) have this as their starting point. A fresh, unique approach is just another thing to commend; here, it’s the end of the film and the beginning of a new life for these people.

The end of this current, mundane way of living is in some ways a needed change. A fight that the father and a local wealthy man have over property won’t mean anything by the end of the day when the latter learns of his daughter’s death, nor will the mother’s concern over a dented garage door. That’s the key to the whole thing: none of them know what’s about to happen. As someone who has grown up in a generally small area, I know firsthand that many small quibbles seem bigger to those involved, if only because there’s nothing else of importance going on. Where the movie falters is in its depiction of our lead, who never really feels like a fully-formed character. Gallner does a good job with the material he’s given, being that of a panic and grief-stricken young boy. The problem comes from the writing, which never takes him past that stage; you never doubt where he is emotionally, but I wanted to have some idea of who he was before. Maybe that’s not what the filmmaker ever intended, but something tells me the whole thing would’ve better off by doing so.

But much of the other stuff here works pretty well, and while not everyone will want to go with its slow pace or contemplative tone, Magic Valley is one of the more interesting films I saw at Tribeca this year. It stands out among much of its indie brethren in its ability to avoid the cliches of a story like this, while not being afraid to take its time to, you know, actually establish some mood. It’s a clever little movie, and one that I would be happy to see show up at an art house theater by the end of the year.