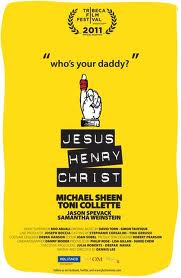 There’s a character who appears for only a few scenes in Jesus Henry Christ, but who I’ve thought about since seeing the movie. This small, insignificant aspect has stuck out in my mind, because I feel like he encapsulates so many of the things wrong with this film.

The character is a man who’s white, and yet acts as if he were…well, as if he were a stereotypical black man. He dresses in what could be considered a traditional African dress, speaks how someone who’s never seen a Spike Lee movie would assume a character in a Spike Lee movie speaks, and has an offensive “accent,” if you can call it that. The joke serves more or less no purpose to the overall film, only being present to give a cheap laugh. Not only was this exact routine done on an episode of Family Guy that aired in 2001, but it was done better there. He’s abrasive, unfunny, unoriginal, mildly offensive and useless. He is, basically, Jesus Henry Christ all in one character.

Telling the story of Henry James Herman (Jason Spevack), a child genius who has been given a scholarship at a local university at the age of ten, while his left-wing mother, Patricia (Toni Collette) has to deal with her son being different as she raises him by herself. Then there’s Dr. Slavkin O’Hara (Michael Sheen), a professor at the same university who’s caused a stir by using his 12-year-old daughter Audrey (Samantha Weinstein) as a test subject for his book, Born Gay or Made That Way? Her involvement with this has caused her to be tormented by her classmates, and thus to resent her father. The two families meet when Henry achieves the scholarship, and it turns out that O’Hara may be his father. How wacky!

There is a good film to be mined from the story writer and director Dennis Lee has made. This is not that film. For much of its running time I was wondering if maybe there was something wrong with how I was watching it – maybe I just wasn’t in the right mood – but I realized soon enough that this movie is just so poorly written.

The script here is so riddled with cliches that I began to wonder if it was just a parody of bad independent cinema (hint: it isn’t). You have children who are cruel on a hyperbolic level, a precocious lead, a mother who just wants to help her son, a father and daughter who don’t get along, a wacky grandfather (Frank Moore), and a precious little soundtrack. It’s a nauseating combination.

The actors don’t fare that well, either. Collette manages to pull off her character, if only because her talent overrides any of the poor decisions made by the filmmaker. Sheen, however, doesn’t impress. It kills me to say it because I love him as an actor, but he’s just so dull here. The biggest distraction is his American accent, as he takes the route of simply speaking in a flat voice that has no distinction in it or change in tone. The kid actors are fine, but they are one-note. Henry is curious about the world (and that’s it), while Audrey hates everybody (and, well…that’s it). I occasionally found myself laughing at a few of the movie’s darker moments. It all starts off promisingly, as we get a flashback to the mother’s childhood, and how her mother and brothers died or disappeared. It’s funny, but there’s another problem: it feels mean for the sake of being mean. Seeing a mother being set on fire at a girl’s tenth birthday party might get an initial chuckle, but the ugliness of the scene undermines the humor that we’re supposed to take in.

Another example of the whole thing’s meanness comes in the form of one of Audrey’s teachers who – maybe because this is an indie film and feels the need to be “different” – is a Muslim American. The teacher herself isn’t unpleasant; she’s actually portrayed as being friendly and helpful. Her presence is exploited in a scene where one of the aforementioned overtly evil children insults her after she accuses him of shooting a spitball. He makes a comment about her not being a “real American,” and other garbage like that, which I guess is supposed to be shocking. The thing is, it’s here for no reason. Well, there actually is a reason: they want to make the kid evil. But, because this script is so terrible, they take the easiest possible route by throwing race into the mix. Not only is this simply a badly-constructed scene, it’s also thematically irrelevant, as the exchange never comes up at any point later in the movie. It’s only present to make him an even more loathsome character, because there needs to be some sort of conflict.

But you want to talk about being manipulative? Oh, boy, can this movie one-up itself. I mentioned above that the film’s opening shows how the mother lost her mother and brothers, either to death or abandonment. One of the siblings mentioned is the main character’s Uncle Jimmy, who at first is simply mentioned of having “died of AIDS.” As I was sitting in the dark theater and this seemingly insignificant line was uttered, I thought this in my mind:

Well, it did it. During the last scene (spoilers, I guess), Henry’s mother shows him pictures of members of their family. When we get to Uncle Jimmy, the movie has the gall to show us a picture of the AIDS-afflicted Uncle holding a baby Henry in his arms. I wanted to throw my hands up and shout at the movie for being so cheap. And guess what? He’s named after the dead Uncle! Henry James Herman! Grab the tissues!

Look, any person with a moral compass is going to feel sympathy for someone who’s in the final stages of AIDS. Using someone like that in your final moments to try and get tears from the audience? Frankly, that’s just sickening. I had given up on the entire movie at this point, but that was the moment where I just veered straight into hatred. If you can’t tell, I don’t consider this to be a terribly good motion picture.