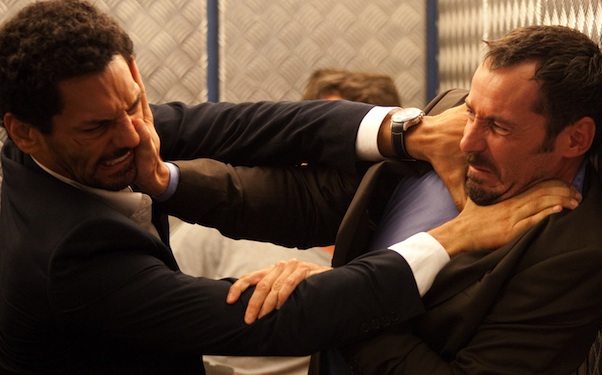 As is customary of most festivals these days, we’ve been informed (via Deadline) that four Tribeca titles will see a spring VOD release through Tribeca Film. In this grouping, we can look forward to Death of a Superhero (which we loved at TIFF), The Giant Mechanical Man, Sleepless Night (my most anticipated of the lot), and Booker’s Place: A Mississippi Story — all of which festival director Geoff Gilmore feels “embody the exceptional artistry and personal resonance that filmmaking at its finest can provide.” The lattermost of those will begin its VOD run on April 26th, while the other three can be expected on various platforms beginning April 17th.

You can read a synopsis of these four films below:

BOOKER’S PLACE: A MISSISSIPPI STORY, directed by Raymond De Felitta. (USA) – World Premiere in TFF’s Spotlight section. In 1965, filmmaker Frank De Felitta made a documentary for NBC News about the changing times in Mississippi that featured Booker Wright – an African-American waiter who worked in a “whites only” restaurant. Booker went on national television and exploded the myth of who he was and his position serving the white community. 46 years later, Frank’s son, director Raymond De Felitta (CITY ISLAND, TWO FAMILY HOUSE), documents a journey into the past and current-day Mississippi with Booker’s granddaughter, in search of who Booker Wright was, the intricacies surrounding his courageous life and untimely murder, and the role Frank De Felitta’s documentary may have played in it. BOOKER’S PLACE will begin a theatrical release on April 25 in L.A. and April 27 in New York.

DEATH OF A SUPERHERO, directed by Ian Fitzgibbon, written by Anthony McCarten. (Ireland, Germany) – U.S. premiere in TFF’s Viewpoints section. Donald is a teenager with extraordinary talents, wild daydreams, and a bright future as an artist of fantastical graphic novels. But when Donald discovers that a very real enemy is trying to kill him, an unorthodox psychologist tries to help him find the light in an otherwise dark world. Thomas Brodie-Sangster, Andy Serkis and Aisling Loftus star in this exceptionally honest drama about discovering life, love, and death. DEATH OF A SUPERHERO will have a limited theatrical release beginning May 4.

THE GIANT MECHANICAL MAN, directed and written by Lee Kirk. (USA) – World Premiere in TFF’s Spotlight section. Thirty-somethings Janice (Jenna Fischer) and Tim (Chris Messina) haven’t quite learned how to navigate adulthood. Tim is a street performer whose unique talents as a “living statue” don’t exactly pay the bills. Janice is out of work and under pressure by her sister (Malin Akerman) to date an egotistical self-help guru (Topher Grace). In this charming comedic romance, these two strangers help each other to realize that it only takes one person to make you feel important. THE GIANT MECHANICAL MAN will have a limited theatrical release starting April 27 in New York.

SLEEPLESS NIGHT (Nuit Blanche), directed by Frederic Jardin, written by Frederic Jardin and Nicolas Saada. (France, Belgium, Luxembourg) – New York Premiere in TFF’s Cinemania section. Vincent is a dedicated police officer, or so it seems. After he steals a massive bag of cocaine, his young son winds up being held for ransom by the mob boss it belongs to. When Vincent travels to the outskirts of Paris to trade the drugs for his son, he gets caught in an intense cat-and-mouse game that quickly spirals out of control. This night might not only be the longest of his life—it could be the last. SLEEPLESS NIGHT will have a limited theatrical release beginning May 11 in New York.

Impressive as those above selections may be, it’s not even the tip of the iceberg; in fact, the lineup for this year’s Tribeca is very likely the best this festival has had in its 11-year run. So good, in fact, that Death of a Superhero — a film we gave a rave review back at TIFF — is playing there almost entirely unbeknownst to myself.

The first poster for the film has debuted over at Movieline, and can be seen below: Synopsis: Donald is a teenager with extraordinary talents, wild daydreams, and a bright future as an artist of fantastical graphic novels. But when Donald discovers that a very real enemy is trying to kill him, an unorthodox psychologist tries to help him find the light in an otherwise dark world. Thomas Brodie-Sangster and Andy Serkis star in this exceptionally honest drama about discovering life, love, and death.

Along with the aforementioned VOD opening, Death of a Superhero will enter limited theatrical release on May 4th.

Are you looking forward to any of these films, or Tribeca in general? Do you plan to check them out on VOD?