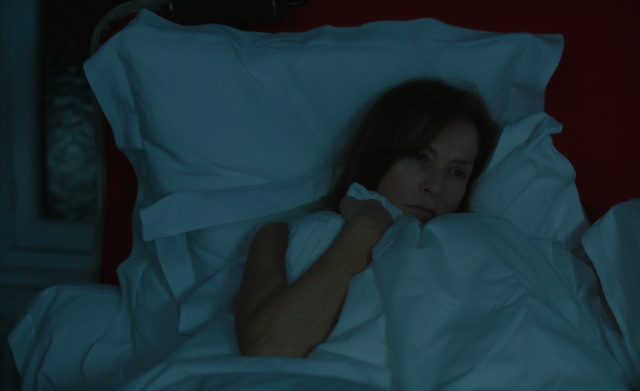 Catherine Breillat returned, somewhat under the radar, with Abuse of Weakness at TIFF 2013, and at the festival we deemed her latest picture the chance “to watch how someone so desperately in need can be preyed upon no matter their own intelligence, wealth, or stature.” (Yes, we liked it.) True to the writer-director, the experience sounds justifiably unpleasant, coming from a real-life incident experienced by its author — the sort of connection which is said to have lent her film an altogether unshakable power.

Now, Commeaucinema (via ThePlaylist) have a trailer that overcomes its lack of subtitles with fine images and glimpses of Isabelle Huppert‘s performance, which we had commended by saying, “If the film will be remembered for anything outside its own harrowing true story, you don’t have to look further than Huppert.” If the film fails to offer much else — though we do think it will — that much is almost guaranteed to compel.

“In 2004, at the age of 56, Catherine Breillat suffered a serious stroke. Her left side was initially paralyzed and after five months in the hospital she worked like a demon to walk again. Not long after, she prepared an adaptation of her novel Bad Love and decided to cast the notorious ‘swindler of the stars,’ Christophe Rocancourt, fresh from a jail term for fraud. Over the next several months, Rocancourt took advantage of Breillat’s condition and stood by her side as she wrote him checks amounting to €650,000. She later took him to court won her case, and chronicled the experience in a book that she has now adapted into a uniquely haunting film, with a bold, tough performance by Isabelle Huppert as the Breillat figure and French/Portuguese rapper Kool Shen as the con man.” Abuse of Weakness will open in France and Belgium next month.

Based on the trailer, does it seem Breillat is still in form with her latest film?