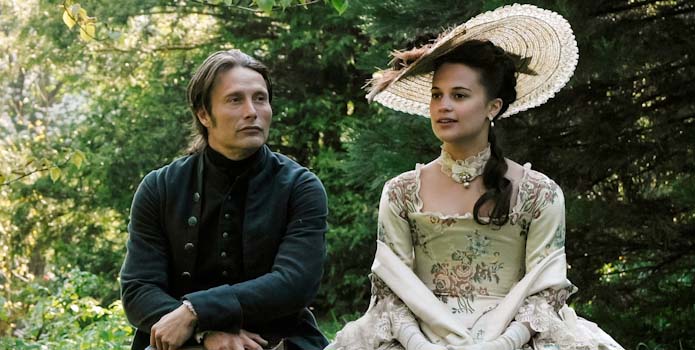 I had not heard of A Royal Affair until this morning, when those behind 2012’s TIFF announced their excellent lineup. So why do I have legitimate interest right off the proverbial bat? It’s simple: Mads Mikkelsen, who you surely know as one of the most interesting actors currently working today. (The co-producer credit from Lars von Trier isn’t so bad, either.)

While the film has already played in England to very strong reviews, its impending North American premiere has suddenly made its trailer a pertinent point of discussion. So. I could see a few complaining about the austere nature lying on the film’s surface — not that I necessarily object to that in every case — which makes it all the more difficult not to appreciate the grittier and slightly more bawdy nature of Affair‘s other elements. There’s cursing, sex, some violence, and the promise of plenty more in the final film. To me, it kind of looks like a fun time.

Synopsis: This sumptuous historical drama from writer-director Nikolaj Arcel (screenwriter of the original version of The Girl With the Dragon Tattoo) chronicles the scandalous love triangle between a queen (Alicia Vikander), her German doctor (Mads Mikkelsen), and the mad King of Denmark (Mikkel Følsgaard).

TIFF have some additional stills from the film: There are also shots from the Mikkelsen-led Thomas Vinterberg film, The Hunt, which we gave a rave review at Cannes: Is the material on display in this trailer a good sign? Are these stills very enticing?