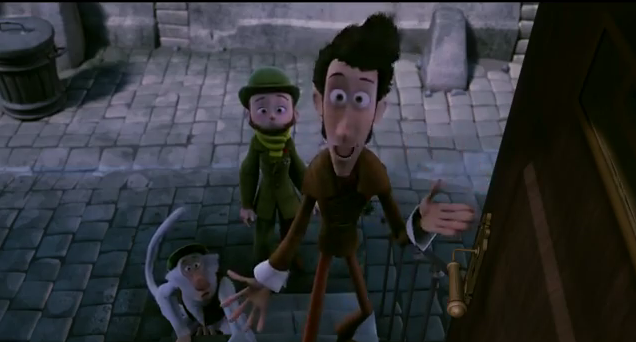 Trailer For Luc Besson-Produced ‘A Monster in Paris’ Luc Besson has only done some official work in the realm of animation — his trilogy of Arthur movies immediately springs to mind — but it’s beside the point when almost everything he’s involved with feels like a cartoon. Not that I’m condemning what he does, since I actually enjoy some of his writing/directing/producing work; it’s just that they often feel ridiculous. But that argument may not matter with A Monster in Paris, a new producing project for him that is in fact a CG cartoon. The trailer for it has shown up on the TIFF YouTube page, as it will premiere at the festival.

One of the main things that I pay attention to when looking at footage for an upcoming animated film is the animation itself, since the world can’t be convincingly sold unless that aspect works. Thankfully, the style here looks unique — it diverts from the style of Pixar, but manages to look more lively than most of what DreamWorks has given us up to this point, finding a middle ground of sorts between the two. When it comes to the plot: that doesn’t seem to be relevant here, with design and gags getting the most attention. If those two elements are at least implemented properly, then this could be some good fun.

Plot: Paris, 1910. Emile, a shy movie projectionist, and Raoul, a colourful inventor, find themselves embarked on the hunt for a monster terrorizing citizens. They join forces with the big-hearted star of the Bird of Paradise cabaret, an eccentric scientist and his irascible monkey to save the monster, who turns out to be an outsized but harmless flea, from the city’s ruthlessly-ambitious police chief.

Does the animation on display impress you? How do you think the overall film looks?