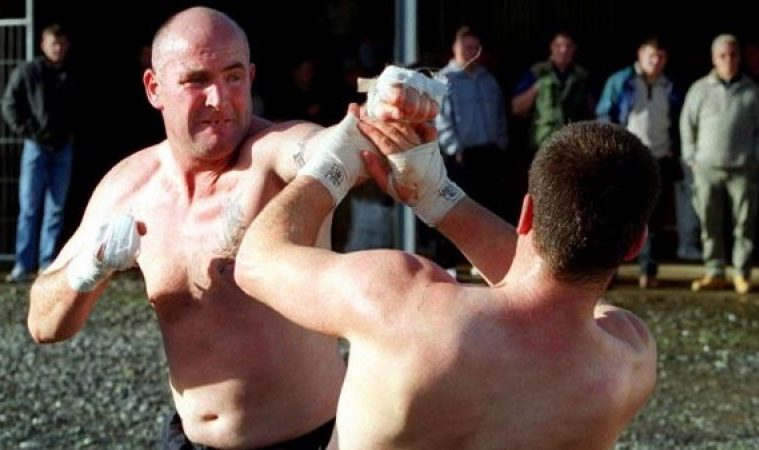 The main thing that people have been comparing the documentary Knuckle to is Guy Ritchie‘s Snatch, in particular the Brad Pitt character of Pikey. If you’ve seen it, you probably remember the muscled fighter with a lovable spirit and an indecipherable brogue. Knuckle is in that same vein, since it follows Irish bare-knuckle boxers who go against each other, with pride and money on the line.

Playing at Sundance (to positive reviews) and showing up at Fantastic Fest this month, a trailer has appeared from Yahoo! (via FirstShowing), giving us a look at the men beating each other with their fists. Director Ian Palmer followed his subjects over the course of twelve years, chronicling how fighting changes both themselves and their families; that should allow for the audience to get a full picture of these people. The trailer gives you a brief glimpse of that, although some of the other material feels like it gets in the way of this drama — specifically, the “humorous” elements. Overall, though, I think it looks like it covers an interesting subject (and does it well), so there’s some interest on my part. And it must be compelling enough, as HBO plans to make a series based on the story. Synopsis: An epic 12-year journey into the brutal and secretive world of Irish Traveler bare-knuckle fighting. Residing in Ireland and parts of the United Kingdom, the Travelers are a nomadic ethnic group with their own customs and a deep sense of clan pride, despite being interrelated by marriage within their small population. When conflicts arise between rival clans, arguments are often settled through ritualized, bare-knuckle fighting.

Knuckle will hit theaters in a limited release on December 2nd.

Does this trailer make you interested in bare-knuckle boxers? How long would it take for one of these guys to successfully beat you up?