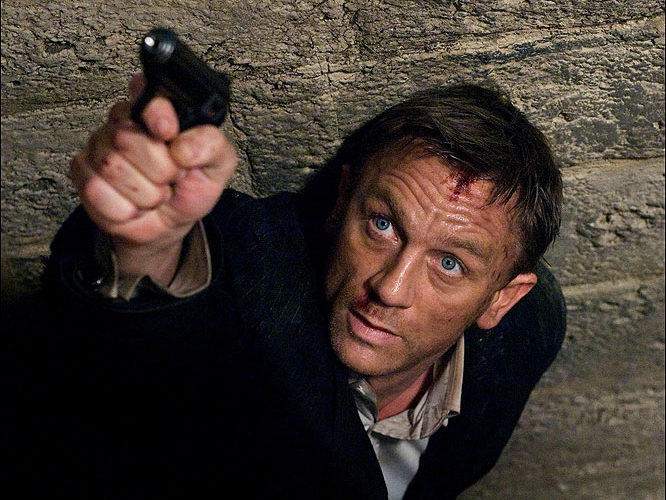 The title is one of the most memorable things about many Bond movies, as much as I hate to say that. I don’t know if there’s a general consensus as to what the best is, but you probably know quite a few. (I think You Only Live Twice is my favorite of the bunch, if that means anything.) Almost everybody has been referring to this newest installment as Bond 23 for the time being, and many of us have been curious as to what it would actually be called. A lot of people hated the name Quantum of Solace (and merely disliked the actual film), so a rebound of sorts would be a nice thing to see.

Thankfully, BlicOnline (via BleedingCool) talked to cellist Jelena Mihailovic, and she told them that her performance at this year’s Cannes Film Festival was seen by Bond 23 director Sam Mendes and the it’s producers, leaving them “staggered.” As a result, they’re said to have “on the spot offered Jelena a chance to write the opening score for the new James Bond film,” which she claims is called Carte Blanche.

It just so happens that there was a Bond novel with the same title published earlier this year, written by Jeffrey Deaver. You can read a plot synopsis below:

“[Bond] starts his assignment on the outskirts of Novi Sad in Serbia where an Irish sapper-turned-enforcer named Niall Dunne is planning to derail a train carrying three hundred kilograms of methyl isocyanate, dumping it into the Danube. Bond is able to prevent the catastrophe by derailing the train himself at a much safer place along the line. He is unable to detain Dunne, who kills Bond’s Serbian contacts in the course of his escape.”

One of the things we’ve previously heard about the movie was that it would be set in South Africa, and going over the plot summary of the book on Wikipedia (don’t look at me like that) shows that this location is in fact part of the story. If any further proof is desired on your part, rumors have said that a scene in the movie will involve a train; that makes this seem like a real possibility to me. What I really want to know now is who the people in the cast — which includes Ralph Fiennes, Javier Bardem, Naomie Harris, and Ben Whishaw — will end up playing. It’s already been said that Bardem is the villain and Harris is Moneypenney, but the other ones aren’t all that obvious.

The novel is also a reboot of the Bond character, although that was done fairly recently in Casino Royale; they might just scrap that element. Still, just taking the story into account makes it sound like an interesting turn for the character to take, with there being some more complexity here, something that Mendes is pushing for with this newest installment. So, if this is the route that they are indeed taking, then I would be fully on board with Bond 23 — or Carte Blanche.

Do you think that this book will serve as the basis for Bond 23? Does this title work for you?