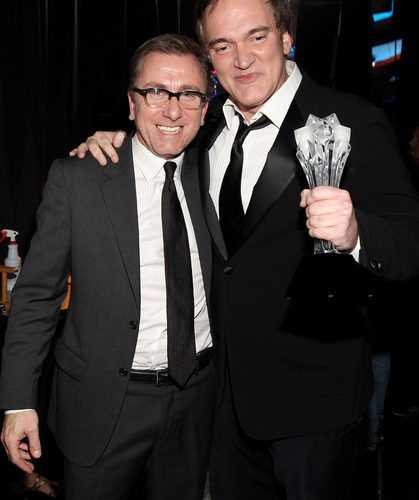 Tim Roth Says He and Quentin Tarantino May Stage Reunion If such a practice were at all deemed necessary, Quentin Tarantino‘s career is one that can be divided into two relatively clean segments — i.e., pre-Kill Bill and post-Kill Bill, which almost speaks for itself — and it’s a demarcation that can render what were once aspects into vestiges. Some, more than others, are a shame for fans to have seen fade away, and few of those match his collaborations with Tim Roth. Admittedly, this was a short one — two features (the second of which was with limited screentime) and a generally forgettable short, “The Man from Hollywood,” as produced for the anthology picture Four Rooms — but also an energetic, fruitful pairing of two men who seemed to “get” one another in special ways. And to possibly land only behind Christoph Waltz and Samuel L. Jackson as his best performer? An honor of its own.

So now is the day many kept their hopes up for but never fully expected. In a very premature hint at what the writer-director has coming up next, Roth, while speaking to Getty Images Entertainment (via HeyUGuys), said he and Tarantino are “gonna meet for a beer,” the wish-I-was-there process of which will allow them to ” have a serious talk about [his next film].” It’s a drop of information that’s at once minor and great, making it all the more unfortunate that an identity of said next film is, almost always, relatively unknown when talking about this director; after Django Unchained, it could easily be a closer to his (sort of) unofficial revenge trilogy, a gangster movie, something in the vein of Jackie Brown, or none of the above.

Right now, though, does that matter too greatly? If you’ve been keen on the Roth–Tarantino thing for years, and if you’ve been hoping to see that resurrected, you’re reading news too promising to simply shrug off.

How do you feel about having these two back together? Any preferences for the project itself?