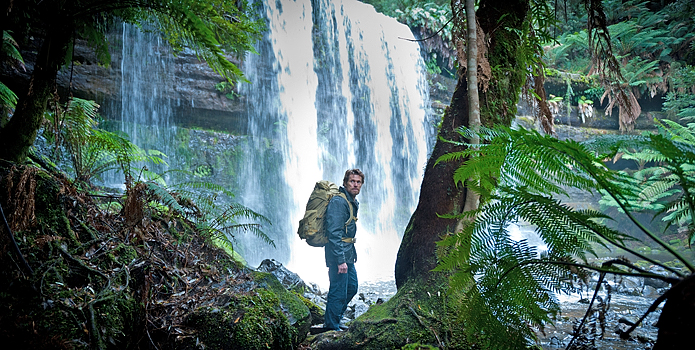 The opening shots of Daniel Nettheim‘s The Hunter show Martin David (Willem Dafoe) in a hotel room, seemingly unable to look more out of place if he tried. Coupled with glimpses of high-tech equipment strewn throughout the room, we start to get a grip on who this guy is. And it’s good that he’s being put front and center this early on, for The Hunter is, above all else, a character piece about a man living in a dangerous environment that he was meant for.

Written by Alice Addison and based on the Julia Leigh novel of the same name, the story follows David as he’s sent to Australia by a biotech company, with the task of finding a Tasmanian Tiger. No small goal – they are thought to be extinct, and the area that they may live in is quite hostile. After being sent down to live with a widow and her two children, he begins to form a bond with the family, while also dealing with unfriendly locals who try to make him leave. Meanwhile, a guide named Jack Mindy (Sam Neill) seems friendly on first glance, but something else is clearly going on.

I wouldn’t consider the plot to be terribly complex; everything stated above encapsulates most of the plot strands, but this isn’t a bad thing. This is very much Dafoe‘s show, with his tremendous acting ability complimenting (and sometimes carrying) everything else around him. Some may only know him from the Spider-Man movies and Platoon, and thus aren’t aware that he’s one of the bravest actors around. While The Hunter won’t stand out as his most notable work, what he does with the material is basically enough to recommend the film. Thankfully, there’s more to the proceedings.

The interactions between him and the family – scenes that, without question, could have been schmaltzy and manipulative in lesser hands – work well. The two children, a boy and girl (Finn Woodlock and Morgana Davies), have essentially been on their own since their father went missing on the same quest as our lead and their mother (Frances O’Connor) became extremely depressed due to his disappearance. Some of the early scenes between him and the kids are a little awkward, as they feel designed to elicit specific reactions. After getting into the groove of things a little, however, both the audience and David are able to appreciate the kids for their individual charms. The settings under which they live means that they aren’t just your typical, rambunctious kids; they’re real people dealing with a tragic situation.

The mother, sadly, doesn’t leave much of an impression. O’Connor‘s performance is actually solid work; the script just makes her too easy of a character. No noticeable adjustments are made on her part to this stranger living in her house, with her children, and although this may have been done so as to avoid certain cliches often seen in that kind of scenario, her presence isn’t really needed.

Where the film really shines is in its imagery. The landscape being used here is an incredible sight as is, but Nettheim and his cinematographer, Robert Humphreys, capture it in equal measures of beauty and harshness. Green forests, rocky land, even the dirt roads – they all feel like they’re right in front of you, and not just scenery or places for the characters to stand around.

This sense of atmosphere extends past the landscape; the family home is slightly dirty, with items strewn about; bars have – just like their customers – an opposing tone; even the opening scene’s sterile hotel rooms establish an early contrast between city and nature. Some of these are obviously preferable to others, but they all function properly and contribute to the final picture.

One area of the story that feels rather under-served is the aforementioned townsfolk, who are angry over people coming in to take local jobs. There’s something about a logging company, the desecration of nature and the term “Greenie” gets thrown around a lot, but none of it sticks. Now, if it only went that far, fine; if a minor subplot doesn’t work, it can be overlooked easy enough. But there’s a scene where one of the characters is revealed to be involved with them – why? They actually do need to set up a plot development at the end (if nothing was there, it wouldn’t work), but they could have made it feel organic in many other ways. The one chosen not only rushes things along, it also makes little sense. And though it be the only true misstep that’s taken, it’s impossible to ignore.

That said, much of The Hunter works on a purely visual level. You’ll very likely find more interesting plots and character arcs in other offerings this year, but there’s something to be said about a drama that makes you feel like you’re with the leads, and also takes you to places that you didn’t even know existed.