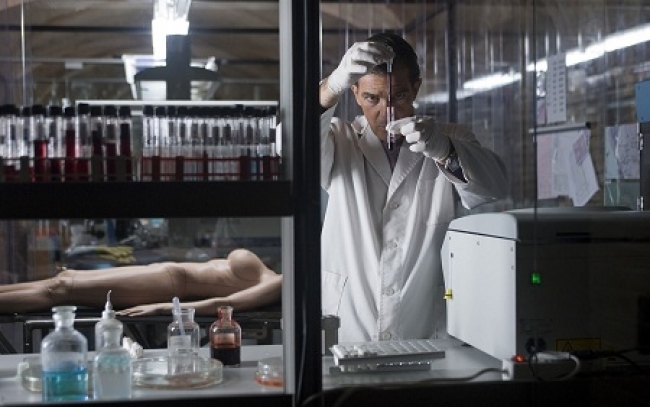 ‘The Skin I Live In,’ ‘Cabin in the Woods,’ ‘Take Shelter’ and ‘Ledge’ Get Release Dates Thanks to the power of the internet, we’ve learned when we’ll be able to see The Skin I Live In, Take Shelter, The Cabin in the Woods and Man on a Ledge.

According to ThePlaylist, Broken Embraces director Pedro Almodovar‘s The Skin I Live In, starring Antonio Banderas, will be getting a limited release from Sony Pictures Classics sometime in November. There isn’t an exact date, but it’s at least good to have a general idea of when we’ll be seeing the movie. Also starring Elena Anaya, Marisa Paredes, Jan Cornet, Roberto Alamo, Blanca Suárez, Eduard Fernández, José Luis Gómez, Bárbara Lennie, Susi Sánchez, Fernando Cayo and Teresa Manresa, the movie certainly looks interesting, and will be playing in competition at this year’s Cannes.

For those who want to know more, they’re in luck, as a plot synopsis has been released. That can be read below:

Ever since his wife was burned in a car crash, Dr. Robert Ledgard, an eminent plastic surgeon, has been interested in creating a new skin with which he could have saved her. After twelve years, he manages to cultivate a skin that is a real shield against every assault. In addition to years of study and experimentation, Robert needed a further three things: no scruples, an accomplice and a human guinea pig. Scruples were never a problem. Marilia, the woman who looked after him from the day he was born, is his most faithful accomplice. And as for the human guinea pig…

Meanwhile, Jeff Nichols‘ Shotgun Stories follow-up, Take Shelter, will also be getting a limited release from Sony Pictures Classics, this one coming on October 7th. Reuniting him with Stories lead Michael Shannon, as well as The Tree of Life‘s Jessica Chastain, the movie follows a man who begins to build a shelter for him and his family after he has nightmares about a storm killing them all. It is – no hyperbole, I swear – one of my five most anticipated movies of 2011. Not only was Shotgun Stories a promising debut and not only is Michael Shannon one of the best actors of his generation, but it has such a great concept and got strong reviews at this year’s Sundance. I can’t wait to finally see this, and I’m sure it’ll get more people’s attention as it moves closer to release.

Then, there’s the Sam Worthington film Man on a Ledge, which TheWrap says will be hitting on January 13th, 2012. That release date isn’t entirely encouraging, as January and February have earned their reputations as “dump months” over the past few years. Directed by Asger Leth and starring the Avatar lead as a a former NYPD officer who’s put himself on a ledge, it’s got a strong cast, with Elizabeth Banks, Jamie Bell, Anthony Mackie, Ed Harris and Edward Burns. The whole thing sounds like it’s far too complex for its own good, but I’m kind of curious, if only so I can figure out how they try to make sense of the story. But, like I said, that release date isn’t giving much hope.

Lastly, ShockTilYouDrop has learned Joss Whedon and Drew Goddard‘s The Cabin In The Woods may be hitting on October 28th, 2011. The horror film involving some sort of monster, stars Thor himself, Chris Hemsworth (who is reuniting with Whedon on The Avengers as we speak), as well as Richard Jenkins, Bradley Whitford, Jesse Williams and Kristen Connolly. It was recently picked up for distribution, after a long wait, by Lionsgate.

Which of these movies are you most looking forward to?