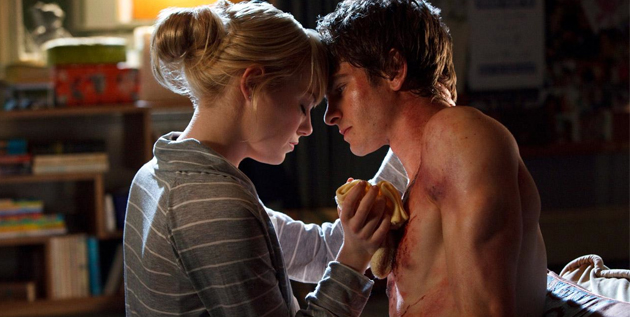 ‘The Amazing Spider-Man’ Swings Into Gear: Our Impressions of The Untold Story Presentation There has been some doubt over the reboot of the Spider-Man franchise. Will audiences respond to this character as they did when the original film came out back in 2002? Is it too soon to bring back this franchise? In fact, the third and most recent film was released in 2007. Is it possible The Amazing Spider-Man will be forgotten this summer? It’s sandwiched in-between comic book heavy hitters The Avengers, coming out on May 4th, and the third and final film in Christopher Nolan’s Batman series, The Dark Knight Rises, set to come out on July 20th. With all these questions in the ether, Sony decided to put together a worldwide event, showcasing the talent behind the reboot, in theaters on July 3rd.

Sony was set to simulcast a 30-minute sneak preview in 13 major cities around the world, giving audiences a taste of the summer blockbuster, not to mention a new trailer. Lucky, and maybe obviously, New York City was the cornerstone of this event. The film’s set in New York. Fans lined up outside of the Regal Union Square theater for hours, just to get a glimpse of the new movie coming out this summer. Check out the trailer below and our impressions to follow.

When the screen flickered, director Marc Webb, located in L.A., was brought out to introduce the sneak preview. Then the video cuts to Rio de Janeiro, where producers Matthew Tolmach and Avi Arad were accompanied by actress Emma Stone, who plays Gwen Stacy in the film. Quickly, the simulcast shot over to London, where actor Rhys Ifans (Dr. Curt Connors/The Lizard) was placed to fuel the fan excitement, then to New York City where host Josh Horowitz (MTV News) introduced the star of the movie, Andrew Garfield, to a flock of frenzied fans. The theater was full of cheers and applause, while Garfield charmingly devoured the ovation. Once the main talent had been introduced, Webb told the audience to put on their 3D glasses and prepare for the new trailer.

For anyone who was worried about the web-slinging effects and the 3D, you can rest easy. The 3D looks good and lends a lot to Spider-Man’s gymnastics through and above the streets of New York City. We also see the budding romance between Peter Parker and Gwen Stacy and more of her role in Peter’s transformation to the superhero. We get more of Peter Parker’s family life, living with his Uncle Ben (Martin Sheen) and Aunt May (Sally Field), and a look at the mystery around Peter Parker’s mother and father, Mary and Richard Parker.

Then we meet Dr. Connors and his relationship with Spidey’s father. We see the villain of the movie, The Lizard, and he looks fantastic! We also get a good feeling of the budding superhero’s wise-crackin’ nature in a scene where he is trying to stop a car thief. I feel this element will get punched up in the film, as it was lacking in the Sam Raimi version. In this particular scene, the New York City Police Department is hot on the trail of Spider-Man, suggesting a darker and grittier film than the previous three.

After the trailer premiere, there was a brief Q&A with the director and talent. First, Webb was asked about the tone and direction of the new film, while Stone was asked what were the differences between her character Gwen Stacy and Mary Jane Watson. Her answer was something to be remembered: Gwen Stacy is in love with Peter Parker, while Mary Jane Watson was in love with Spider-Man. Ifans was asked what separates The Lizard from past Spider-Man villains, while Garfield was asked why he wanted to play the famed hero. He, smartly responded, “Because I am not an idiot.” He won the approval from the New York audience with that one. It also didn’t hurt name-dropping Miles Morales, the half-Hispanic, the half African-American Spider-Man of the Ultimate Marvel Universe.

After the brief Q&A, director Marc Webb introduced a sizzle reel he put together for the event. He also noted that the effects were not completed and the audiences around the world should have that in mind while watching. The lights dimmed and the sizzle reel began.

The footage kicked off with Peter Parker at Midtown Science High School, and bully Flash Thompson doing what he does best, bullying. Eventually, of course, Parker is pushed too far when he finally stands up to Flash Thompson by fighting back. Uncle Ben is unhappy with Peter and sternly reprimands him. Gwen Stacy is standing behind Peter and Uncle Ben notices that Peter has a crush on her and does the right thing by embarrassing him in front of her. Peter and Gwen start talking and flirting with each other. We get a good idea of how Andrew Garfield and Emma Stone were rightfully cast in these roles. We see their awkward interactions and flirtations, it was pitch-perfect.

The Spider-Man’s origin scene was a big question surrounding this film. Were we going to get the same origin scene as the original film? Well, yes and no. The origin was hinted in the sizzle reel but not shown. We get glimpses of Peter Parker in Dr. Connors’ lab surrounded by what looks like hundreds of radioactive spiders. But we do get to see the after-effects of the accident in a hilarious sequence of Peter brushing his teeth.

We do get some answers regarding Spider-Man’s web-shooters, as they are indeed mechanical and not organic. We got a scene of Peter working on them and perfecting the formula of the actual webs. And of course, a scene of Peter Parker enjoying his newfound abilities. Some of the scenes in the sizzle reel were extended scenes from the trailer, including the car thief scene. In this extended look, we get a better feeling of the comedy, after which I become officially sold on the movie. Garfield appears to capture the perfect smart-ass tone built up in the comics. It would appear the actor has done his homework.

I think my biggest takeaway from the sizzle reel is the role of the N.Y.P.D. here. This was an element never taken to heart is Raimi’s version of Spider-Man. There’s also the addition of George Stacy (Denis Leary), who is at odds with the masked vigilante. We get a scene in the sizzle reel where Peter is defending Spider-Man, but Mr. Stacy doesn’t want to hear any of it. It suggests something like the theme so touted in The Dark Knight: What happens when a city turns on their heroes?

The event ended with the director and talent thanking the fans for their support. Sony gave out a parting gift of T-shirts and a better sense of what will come on July 3rd. If that footage is indicative of what the actual movie will be like, then we have many, many reasons to be excited this summer. The Amazing Spider-Man feels like Columbia and Marvel’s answer to The Dark Knight. The Amazing Spider-Man will hit theaters on July 3rd in 3D, 2D and IMAX 3D.