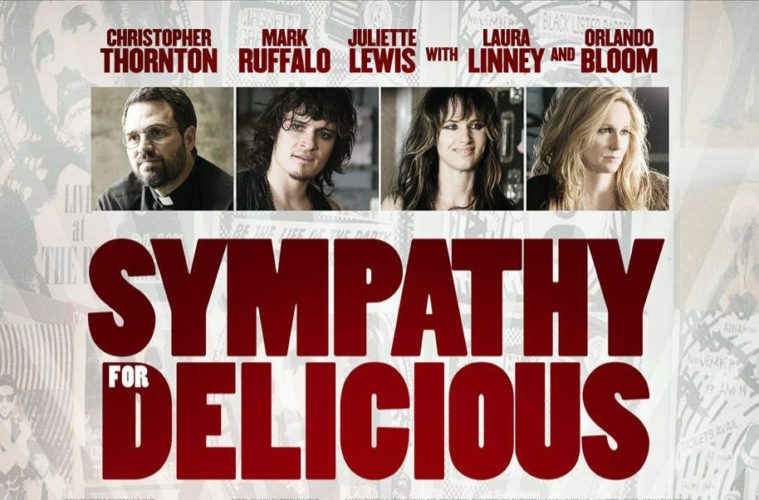 Is it so wrong to want to see a movie because of all the terrible things you’ve heard about it? That’s the question I kept asking myself as I watched the trailer for Mark Ruffalo‘s directorial debut, Sympathy for Delicious. Written by and starring Christopher Thornton, with supporting work from Orlando Bloom, Juliette Lewis, Laura Linney and Ruffalo himself, I’ve been hearing about this movie since it premiered at Sundance in 2010. The things I’ve been hearing have been, to put it lightly, have not been very positive.

And it’s that negative reaction which has me so interested to check it out. The story of a paralyzed street DJ (Thornton, who himself is paralyzed in real life) who discovers that he has mystical healing powers but cannot heal himself, he soon joins a rock band fronted by Bloom‘s character, The Stain. There’s some other mumbo-jumbo present here about answering questions from God and other such things.

I’m not rooting for this movie’s failure, but, like I said, my curiosity for it mostly stems from the bad things I’ve heard. I even assumed this movie was a comedy up until watching the trailer, simply due to the ridiculous premise and title. These expectations were in someway met, though, with the shameless quoting of Mick Jagger and Keith Richards. You can check out the trailer below, thanks to Fandango:

Plot: “Sympathy For Delicious” marks acclaimed actor Mark Ruffalo’s first foray into directing. This inspired and unusual film tells the story of Dean O’Dwyer (Christopher Thornton), also known as “Delicious D,” an up-and-coming DJ on the underground music scene in Los Angeles. When a motorcycle accident leaves Dean paralyzed, he abandons his turntables for a wheelchair as his once promising career disappears before his eyes.

Forced to live out of his car on skid row, Dean begins his descent into depression when he meets Father Joe Roselli (Mark Ruffalo), a passionate young priest. Father Joe introduces Dean to the world of faith-healing, an unlikely way for him to begin his quest to walk again. He soon discovers that he possesses the otherworldly power to heal people, but in an odd twist of fate, he is utterly unable to heal himself.

Despite Father Joe’s warnings, Dean angrily decides to use his newfound gift for fame and fortune. He joins a rock band led by charismatic front man The Stain (Orlando Bloom) with bassist Ariel (Juliet Lewis), and manager Nina Hogue (Laura Linney). But his newfound notoriety is unable to cure the hurt that encompasses his life. To find true healing, Dean must ultimately confront his worst demons and come to terms with his own humanity.

“Sympathy For Delicious” is an edgy rock-and-roll spiritual journey that explores the lasting effects of tragedy, the search for meaning, and the ultimate redemptive power of compassion.

What do you think of this trailer? Do you think it’ll be as bad as the reviews suggest?