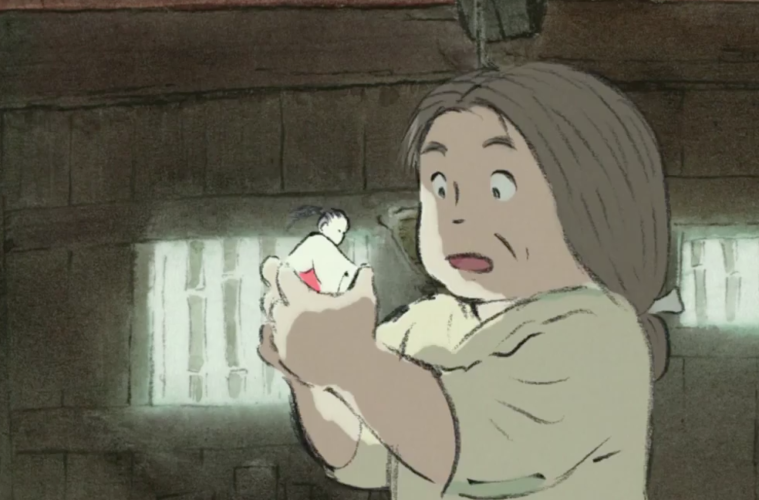 Although pronouncements of their death may have been a tad premature, new offerings from Studio Ghibli can’t help but carry an undeniable air of fragility. But let’s be positive: regardless of whatever may come, business-wise, there are still some creative endeavors for U.S. audiences to savor. Soon after its Cannes premiere, a celebrity-filled dub is being assembled with the talents of James Marsden, Chloë Grace Moretz, Lucy Liu, James Caan, Mary Steenburgen, and Oliver Platt in tow; while there seemingly isn’t yet enough voice work to display, a trailer offers glimpses at Ghibli’s typically entrancing animation work.

Which you could have seen in a trailer that premiered all the way back in October, though some more peeks — especially in these shaky-for-Ghibli days — will hardly raise readers’ ire. Isao Takahata (Grave of the Fireflies) directs the picture, telling of a bamboo cutter, Taketori no Okina, who slices open a stalk to find a thumb-sized baby inside, one who grows into a princess. We were mixed on Princess Kaguya when it played at Cannes, though were willing to concede that its formalism is “rapturous,” with “images that are striking for their simplicity, not density.” With this, another film, and an extensive documentary on the way, Studio Ghibli are still behind some fine work. Let’s hope that lasts.

Have a look at the trailer below (via /Film): Legendary Studio Ghibli cofounder Isao Takahata (Grave of the Fireflies, Pom Poko) revisits Japan’s most famous folktale in this gorgeous, hand-drawn masterwork, decades in the making. Found inside a shining stalk of bamboo by an old bamboo cutter (James Caan) and his wife (Mary Steenburgen), a tiny girl grows rapidly into an exquisite young lady (Chloë Grace Moretz). The mysterious young princess enthralls all who encounter her – but ultimately she must confront her fate, the punishment for her crime.

From the studio that brought you Spirited Away, My Neighbor Totoro, and The Wind Rises comes a powerful and sweeping epic that redefines the limits of animated storytelling and marks a triumphant highpoint within an extraordinary career in filmmaking for director Isao Takahata.

The Tale of Princess Kaguya will open on October 17.